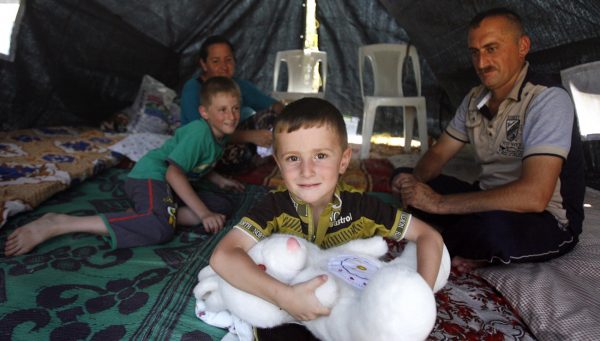 A displaced Iraqi Christian family is seen in 2014 at a camp in Irbil. Mideast Catholic and Orthodox patriarchs decried the desperate situation they face as shepherds of churches "whose existence is in real danger." (CNS photo/Ahmed Jalill, EPA)

They categorized the continued displacement of Christians from the Middle East as “a genocidal project, a humanitarian catastrophe and a plague of the earth’s civilization.”

“The time has come to make a prophetic cry” and to speak “the truth that frees us in the spirit of the Gospel,” the Council of the Eastern Patriarchs said in a statement Aug. 11, after an Aug. 9-10 meeting in Diman, Lebanon.

“We, the custodians of the ‘small flocks,’ are hurting because of the exodus of Christians from their native lands in the Middle East,” the patriarchs said.

They appealed to the United Nations and to “the states directly concerned with the war in Syria, Iraq and Palestine to stop the wars that have arisen, as are evident in the demolition, killing, displacement, revival of terrorist organizations and the fueling of intolerance and conflicts between religions and cultures.”

They categorized as a “stain on the forehead of the 21st century” the persistence of the situation, “the inability to bring about a just, comprehensive and lasting peace in the region” and “the neglect” of the return of refugees, displaced and uprooted people to their homelands and property “in dignity and justice.”

In a plea to Pope Francis, the prelates asked, “Who else but the Rock of Peter can we resort to?”

“We are ready to heed the call to holiness by following the path of the faithful,” they said, but “we represent churches … whose existence is in real danger.”

“Only you, Your Holiness, are left to call on the representatives of the people who control the destinies of peoples, to remind them and even to scold them that the continued displacement of Christians from the Middle East is certainly a genocidal project, a humanitarian catastrophe, but a plague of the earth’s civilization.”

The patriarchs expressed the belief that “the heavens must triumph.”

“Our call today is to become the yeast in the dough and a shining light in a world that is thirsty for the life-giving spirit,” they said.

Christians “will remain rooted in the land of our fathers and forefathers, looking forward with ‘hope beyond all hope’ to a future in which we see our ancient heritage characterize our societies as well as the church of the whole East and West.”

The statement included the Christian leaders’ assessments of the countries in the region.

Pointing to Iraq, they said they were pleased about the liberation of Mosul and towns in the Ninevah Plain from the Islamic State, but that they were concerned about the persistence of extremist groups’ “ideology, inflammatory rhetoric and the climate of conflict in this region.”

The patriarchs appealed to local and international leaders “to respect the rights of Christians and other national constituents to determine the future of their country, away from pressures, in order to achieve their fair share of participation in management, employment, political life” and to keep their “historical and geographical status.”

They encouraged the Iraqi faithful to remain in the country to preserve their civilization and help build a new civilian state.

As for “the bloody horrors” in Syria, the patriarchs said “these events must end, and Syria must emerge from it as a strong, prosperous and secure nation.”

“The future is not for violence and war, but for peace and common life … based on citizenship,” they said. “We will remain wedded to our land in order to build the homeland that we want, a homeland of freedom and dignity.”

The patriarchs said they were following “with great interest the suffering of the Palestinian people as they seek to determine their own destiny and regain their sovereignty over their land.”

They pointed to the “daily harassment” of those who live in Jerusalem and said “the lack of reunification, the continuity of settlement construction and the confiscation of land are the risks to which they are exposed.”

“We know that the economic and security situation has led to the exodus of many of our Christian children from Palestine, but the Holy Land needs to be present, even if some sacrifices are needed in order to reach a political solution in which Jerusalem would be the capital of two peoples and a holy city open to all,” the patriarchs said in their statement.

The delegation of patriarchs met with Lebanese President Michel Aoun Aug. 9. They asked him to resolve the issue of displaced persons and refugees who have become “a heavy burden and a political, economic, security and social threat to Lebanon.” Between one-quarter and one-third of the population of Lebanon is refugees; more than a million are Syrians.