Your Kingdom Come: Look To The Monastics

Source: Praying in the Rain
Archpriest Michael Gillis | 30 May 2017 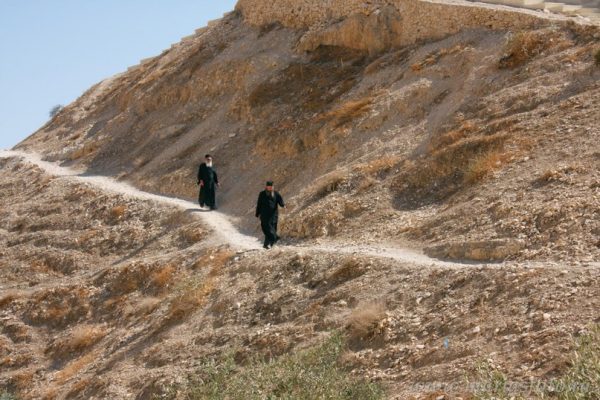 I had a conversation recently in which I couldn’t explain very clearly a comment I made several times, and as a result there was a certain amount of misunderstanding.  I realize that perhaps many people have this same misunderstanding, and since it has to do with the Kingdom of Heaven, and how it “comes” or how we actually enter and live the life of the Kingdom of Heaven while we are still on earth, I thought that discussing this misunderstanding and how to overcome might be a good way to begin our discussion of “Let Your Kingdom come (as in heaven, so also on earth).”

All Christians are called to obey all of the teachings of Christ.  And, all Christians are repenting sinners who fall woefully short of all of the commands of Christ (what some fathers of the church call the evangelical commandments).  Some Christians, however, seem to do a better job than others at keeping Christ’s commands.  And, it has been my experience that all Christians seem to do a better job of keeping Christ’s commands under certain circumstances or during certain seasons of their life than others.

Throughout history, the evangelical commands have been easier for Christians to live in times of persecution, poverty and oppression.  The very experience of persecution, poverty and oppression for the sake of one’s Christian faith tends to weed out those with shallow faith (remember the parable of the sower, the seed and the soils).  For those who remain faithful in difficult times, the pain caused by their circumstances and the fact that they are powerless to protect or retain family members and property drives them to God as their only help, which in turn results in a superabundant outpouring of grace. And it is this grace that enables them to witness Christ (i.e. live or die as martyrs of Christ).  It is this grace that enables them to live the evangelical commands, to enter the Kingdom of Heaven.

Of course, being a monastic is no guarantee that one will live according to the Gospel teachings, nor does a life in the world with property and family condemn one never to live out the commands of Christ, never to enter the Kingdom of Heaven while still on this earth.  Rather, as Jesus told us, one way is easier than another.  Nevertheless, there are many, many married saints, mothers and/or fathers who raised godly children, rich people who helped the poor, poor people in worldly terms who loved and prayed for the rich, and those with secular power of various kinds, including military power, who were somehow able to find a way to glorify God and live out in some small or large ways the teachings of Jesus in a context that made it very difficult for them to do so.  However, it is usually among the monastics that you find men and women who most fully manifest a life lived according to the evangelical commands, a life lived in the Kingdom of Heaven.

And so, when one asks why such or such a teaching of Jesus is not lived out among Christians in the world (both by laity and clergy), sometimes my only answer is, “well in monasteries they do that.”  I don’t mean that Christians in the world don’t do that at all or that only or all monastics do that—for I can tell you from experience that there are some monks who are more worldly than some bankers with large families.  What I mean is that if you want to see where the evangelical life has best and most clearly been and is being lived out in the Church, you have to look to the monasteries.  Why?  Why isn’t the Kingdom of Heaven being experienced and lived out everywhere in the Church the same?  Jesus told us the reasons, and one of them is that in some contexts it is just much more difficult to enter the Kingdom of Heaven than in other contexts.

What then do we in the world do?  What do those of us with wife and family, possessions and responsibilities, what can we do if we want with our whole hearts to live the evangelical life?  How can we enter the Kingdom of Heaven?  Well, what we can do is what every Christian throughout the ages has or could do: we do our best.  We believe that God is at work in us and in our circumstances (this is what St. Isaac the Syrian calls “providence”) to give us every possible opportunity to love, sacrifice, and pray so that we can enter the Kingdom of God in our everyday life.  However, as Jesus told us, for those of us in the world, for those of us with family and possessions, it will be harder to enter the Kingdom of Heaven than it is for those who are monastics.  But since it is Christ who saves, since salvation is of the Lord, not according to the apparent success or failure of our striving, humility is called for.  The circumstances of our life, we must believe, are the context in which Christ will save us.  It seems to me that we are in profound delusion if we think we would be more holy, more obedient to Christ, more loving, kind and gentle, more prayerful or closer to the Kingdom of Heaven if our circumstances were different.  There is no “if only” in the Kingdom of God.  There is only our life as it is and as we live it before God.

Humility is called for.  Some of the commandments of Christ seem more important to us than others.  Each of us read the Gospel wearing the glasses of our own prejudices, preferences and ideals.  We must be particularly on our guard when we find ourselves offended by how others are not keeping this or that evangelical command (remember what Jesus said about logs and splinters and eyes).  If we are going to look at Jesus’ commands as laws (as the Church teaches us we should), then I think St. James’ instruction about the law applies.  That is, to break one command is be ourselves transgressors of the whole law: “For he who said do not commit adultery also said do not murder.”  Therefore, James explains that we must be very careful and merciful in our judgement of others.  It is easy to see the sins of others and difficult to see our own, but our own sins are the ones that Christ tells us to notice and pay attention to and deal with first—and then you may help your brother with the splinter in his eye.

Humility is called for not only so that we keep our focus in the right place: on our own striving to keep the evangelical commands. Humility is also called for if we are ever going to actually begin to live the life of the Kingdom of Heaven now, on earth, where we are in our lives right now.  To begin we must forsake ideals and learn to be at peace with compromise.  Ideals delude us.  Ideals make us arrogant.  Ideals cause us to assume that a command of Christ either is or isn’t being carried out and that we can tell the difference.  An almost necessary corollary is that we ours selves would or could fulfill the ideal (if our circumstances were different—i.e. “if I were you I would…”).  However, if one assumes that he or she is already very far from living the life of the Kingdom of God, very far from keeping the evangelical commands, then ideals become irrelevant.  If I am already very far from keeping the teachings of Christ, then compromise is no longer thought of as a step away from an ideal, but as a step toward obedience, as step toward the Kingdom of Heaven.

And once I begin to realize that my own life is a life full of compromise, a life full of little steps toward the Kingdom of Heaven (a calling that I fall so miserable short of), then I will start to have compassion on others.  You know, there are some sins I have never tempted with.  Drunkenness, for example, has never been a temptation to me.  There are some commands of Christ that are less difficult for me to fulfil than others—mostly, it seems, because I am seldom seriously tested in those areas.  And, surprise, surprise, it seems that the sins that are not struggles for me are the very sins that I find most offensive in others.  The commandments that are least difficult for me to understand and strive to keep are the very ones that cause the most offence in me when others do not seem to keep them.   I find this phenomenon quite predictable, at least in myself.

But when I keep myself aware of the many and great compromises in my life, the great distance between the life I actually live and the life in the Kingdom of Heaven I strive to enter, then it is easier for me to have compassion on others.  When I realize that there are whole swaths of disobedience to Christ’s commands in my life, whole areas where the teaching of Christ has made little or no impact, then it is easier for me to be compassionate on the blindness of others.  The Kingdom of Heaven is a reality we enter bit by bit, slowly and slowly, at least so long as we are in this world.  And it helps a great deal to keep in mind that Jesus told us that entering the Kingdom of Heaven is more difficult living in the world with family and possession than it is for those who live free of family and possessions.