Signs of the End of the World. Is the Time Ripe?

Source: Orthodox Life (Russian)
A Sermon of the Holy Martyr Gregory (Lebedev), Bishop of Schlisselburg, on the degeneration of the Universe.
Pravmir.com team | 11 August 2018 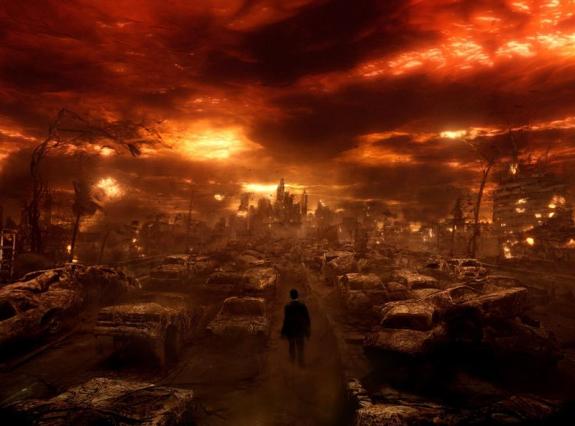 Brethren, last Sunday when I did not see you, you along with the Church prayed to God as to the inexorable Judge, because it was the Sunday of the Last Judgement. What a coincidence! Along with the church’s call there were underground tremors that, as you know, already swept through Northern Europe.

It seemed that earth gave a warning signal, and at that time the Church sang “Behold, the Bridegroom comes at midnight”. Involuntarily, brethren, the question arises: when?

People try to guess in vain: all their attempts are futile, and no matter how much a human mind can come up with, no one will know this mystery. God Himself said: “But of that day and hour no one knows, not even the angels of heaven, but My Father only”. Deepening this thought of Christ, Apostle Paul says that this day will come “as a thief in the night”, i.e. when people do not expect it, and it will be like in the Noah’s times: people drank, ate, had fun, married, and no one thought about anything until all were dead. By extension, Apostle Paul says: the end will come when from human’s perspective everything will be calm, when people will say: “peace and assertion”. Then the end will come! When people will think that everything is all right, then the destruction will come.

Involuntarily our thought is directed to the Gospel, to the Apocalypse, and even to the Old Testament while looking for an answer to this puzzle: so, when? However, one should approach this issue not with curiosity, but with prayer. Church does not bless morbid curiosity but condemns it. It does not even bless the reading of the Apocalypse where the coming of the Son of Man is disclosed in symbolic images. Look, at all times of the year the reading of the Apocalypse during the liturgy is not allowed, because it is a mystery.

So, what are people meant to know about it? Christ Himself specified the signs of the Second Coming to the disciples’ request to tell them when it will happen. These words of Christ were written down by three evangelists: Matthew, Mark, and Luke.

This is what God Himself says about it: “Take heed that no one deceives you. For many will come in My name, saying, “I am Christ”, and will deceive many. And you will hear of wars and rumors of wars (i.e. preparations for war)… but the end is not yet… For nation will rise against nation, and kingdom against kingdom. And there will be famines, pestilences, and earthquakes in various places. All these are the beginning of sorrows. Then they will deliver you up to tribulation and kill you, and you will be hated by all nations for My name’s sake. And then many will be offended…” (Matthew 24:4-10) Love will run out in people: there will be hatred, malice, and betrayal. “Then the end will come” (Matthew 24:14).

Examining this list of signs, one can divide them into two groups. The first one consists of signs of a physical nature: famines or depletion of supplies; pestilences or epidemic diseases; and earthquakes in various places, war, or preparations for war. These are the signs of a physical nature. The second group is of a moral nature: the seduction of tons of people with new idols, the loss of faith, the depletion of love; hatred, malice, and betrayal will rule over people!

In both groups there is one thought: the end will be only then, when the world, the whole universe comes to its degeneration. After all, the world is practical, i.e. it has a certain meaning and objectives. The Earth spins not because it must spin, and people live not because they must live. When the universe completes its cycle and comes to its degeneration, then the end will come. This is clear. From the point of view of Divine Providence, it would be absurd to assume that the universe spins for no reason, and that people live for nothing. No, no!

The human power is implemented in one way or another, and the end will come, when the world is ripe… Does a gardener leave a ripe apple on an apple tree? Never!

The same goes for the physical nature: the human body grows old and gets affected by epidemic diseases that follow one after another. The universe is degenerating, stocks are getting depleted, natural resources are getting destroyed, hence famines. The world is decrepitating, and the Earth is compressing its crust, hence earthquakes in various places. Well? Is the world ripe?

Has the world come to its degeneration? I do not know. Look! It is up to you; it is up to people to decide. Christ said so: recognize it by the signs! When branches of a fig tree become soft, you wonder: summer is coming. Right?

Now, you have the signs. Decide for yourself! You have a “shutter” for this, so to speak. Your eyes, ears, and conscience are such a “shutter”. Look! Listen! You also have a “shutter” of a bigger size: your radio. You hear almost the whole universe in the invisible waves that the radio picks up. Come up to it more often and listen. What will you hear? A jazz band? Foxtrot? Is the whole universe indeed spinning in this disgusting stench? That is terrible, brethren!

You wonder when? It is a mistake. Leave it, Christ did not call you to wonder… If you are getting nervous, calculating the years, or looking for names, then it is a mistake!

That is not what Christ called for. He told His disciples: “Watch therefore!”.