Faith and Science According to the First American Female Astronomer, Maria Mitchell

Source: Bio-Orthodoxy
She believed that the revelations of the Bible and understanding of nature through science not in conflict. "If they seem to be," she said, "it is because you do not understand one or the other."
John Sanidopoulos | 02 June 2018 Maria Mitchell (August 1, 1818-June 28, 1889), the first American woman astronomer, was the first professor of Astronomy at Vassar College and the first director of Vassar’s observatory. Honored internationally, she was one of the most celebrated American scientists of the 19th century.
Maria was the third of ten children born to Quakers Lydia Coleman and William Mitchell on Nantucket Island, Massachusetts. William Mitchell, an amateur astronomer, shared with his children what he considered to be the evidence of God in the natural world. Only Maria was interested enough to learn the mathematics of astronomy. At age 12 Maria counted the seconds for her father while they observed a lunar eclipse. At 14 she could adjust a ship’s chronometer, a valuable skill in a whaling port. She preferred to stand on the roof searching the skies to gathering with the family or friends in the parlor.
In her mid-twenties Mitchell began to question Quaker teachings. In 1843 she was interviewed by two women from her congregation. They recorded, “We have attended to our appointment in the case of Maria Mitchell. She informed us that her mind was not settled on religious subjects, and that she had no wish to retain her right in membership. We submit the case to the Monthly Meeting believing further labor to be unavailing.” She was accordingly disowned from membership. Afterwards, until she left Nantucket more than two decades later, she attended the Unitarian church, although she never became a member.
In her work at the Nantucket Atheneum, Mitchell encountered opinionated readers who insisted on engaging her in conversations about theology, in which she had no interest. “How much talk there is about religion!” she recorded in her diary. “Yesterday I had a Shaker visitor and a Catholic and the more I hear, the less do I care about church doctrines.” This did not however mean that Mitchell had no interest in God. “There is a God, and he is good,” she confided to her diary. “I try to increase my trust in this, my only article of creed.” After the deaths of three of her closest friends in 1855, and during her mother’s illness, she wrote, “What a change a fortnight has made. I have passed through a fortnight of great anxiety in nursing my Mother. I have never been a believer in a special Providence, but when I saw her recovering I felt like giving thanks to God and when anyone says to me ‘how is your mother,’ I felt like saying ‘Better, thank God’ instead of thank you. . . . I would have been glad to make a pilgrimage to Jerusalem to offer up on the holy sepulcher my thanks.” 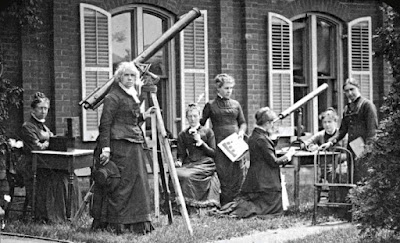 Matthew Vassar, who had established Vassar Female College in 1861 as “the first U.S. college exclusively for women-based on the principle that women should receive the same education, with the same standards, as that offered in men’s colleges,” insisted that women, in a women’s college, should be educated by women instructors. After several years delay due to opposition to women in the faculty within Vassar’s board of trustees, Mitchell was appointed Professor of Astronomy. She taught there from 1865 to 1888.
At Vassar Mitchell was pressured to attend the college chapel, which was served by preachers of various denominations. She disliked sermons that did not touch the heart. Once, when the service interfered with her observation of Saturn, she asked the President to shorten his prayer. Baptist members of the trustees tried to have her dismissed. Her principal foe, trustee Nathan Bishop, called her a “rank Theodore Parker Unitarian.” She had a simple faith in both God and in science. After hearing a Universalist minister preach on the dangers of science, she wrote, “Scientific investigations, pushed on and on, will reveal new ways in which God works, and bring us deeper revelations of the wholly unknown.” She believed that the revelations of the Bible and understanding of nature through science not in conflict. “If they seem to be,” she said, “it is because you do not understand one or the other.”
At her funeral on Nantucket Island, Vassar President James Monroe Taylor said, “If I were to select for comment the one most striking trait of her character, I should name her genuineness. There was no false note in Maria Mitchell’s thinking or utterance. Doubt she might and she might linger in doubt, but false she could not be . . . This genuineness explains also a marked feature of her religious experience. She would not use the language of faith often because it did not seem to her that she had clearly grasped the truths which came through faith. It would be a grave error to infer from this that she was not a religious woman in a true sense. She was always a seeker of truth . . . she fulfilled the exhortation of her friend Dr. Channing, ‘Worship God with what He most delights in, with aspiration for spiritual light and life.'”

Most viewed articles
Metropolitan Hilarion: Conversion of Hagia Sophia into Mosque is a “Slap in the Face to all Christianity”605
Metropolitan Hilarion: the Color of Christ’s Skin Is of No Importance for Christians, Because He Is Revered as God Incarnate412
Father Thomas Hopko and his Fifty Five Maxims of Christian Living327
Do We Ignore the Demons in Our Lives?145
The Feast of the Holy, Glorious and Chiefs of the Apostles, Peter and Paul60
Jerusalem’s Church of Holy Sepulchre Shuttered Again amid Coronavirus Resurgence32
Most popular authors
Pravmir.com team1,049
Fr. Bill Olnhausen327
Priest Luke A. Veronis145
Protopresbyter George D. Konstantopoulos60