Source: RIA Novosti
August 26 marks the birthday of the Catholic nun and missionary, the Blessed Mother Teresa. Born in 1910, Mother Teresa experienced a "call within a call" to devote herself to caring for the sick and poor.
Natalya Mihailova | 30 August 2014 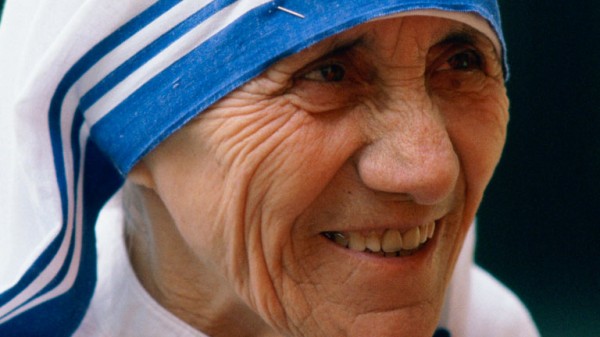 “If you judge people, you have no time to love them.”

August 26 marks the birthday of the Catholic nun and missionary, the Blessed Mother Teresa. Born in 1910, Mother Teresa experienced a “call within a call” to devote herself to caring for the sick and poor. 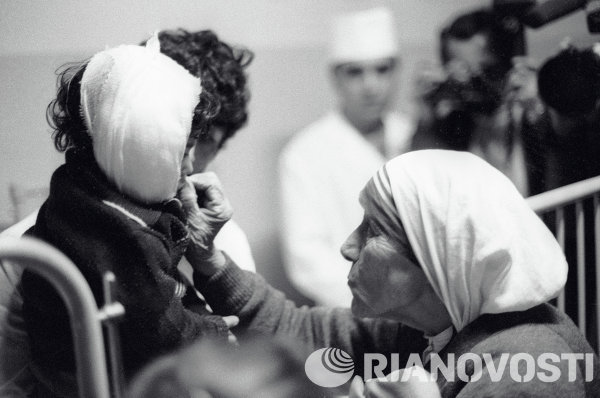 “We are called upon not to be successful, but to be faithfull.”

The real name of Mother Teresa is Agnes Gonxha Bojaxhiu. She was born in the Ottoman Empire (now the territory of the Republic of Macedonia), in the city of Skopje. By the age of 12 she had become convinced that she should commit herself to a religious life and should travel to India to care for the poor. 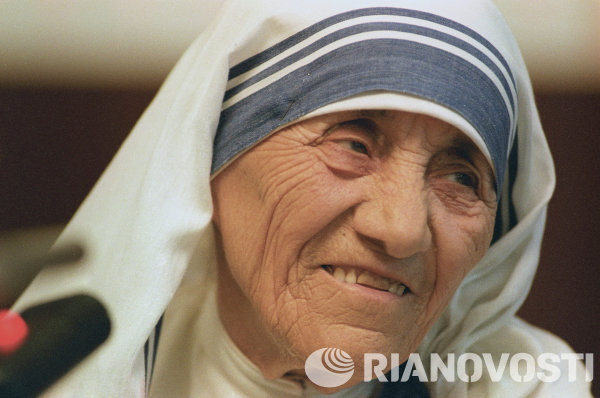 “If luxury creeps in, we lose the spirit of the order.”

Following her mission to care for the sick and poor, Mother Teresa travelled all over the world, including East Beirut, Lebanon, where she took care of 37 mentally handicapped children. 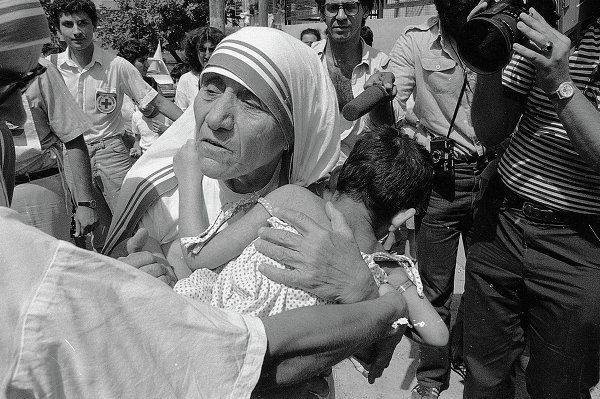 “If we have no peace, it is because we have forgotten that we belong to each other.”

Agnes Gonxha Bojaxhiu left home at the age of 18 to join the Sisters of Loreto Abbey in Ireland as a missionary. She took her first religious vows as a nun on May 24, 1931. Already as Mother Teresa, she went to Armenia to help those suffered in 1988 destructive earthquake. 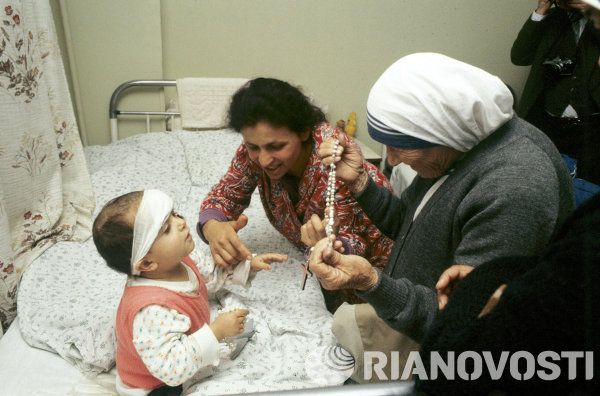 “Please choose the way of peace… In the short term there may be winners and losers in this war that we all dread. But that never can, nor never will justify the suffering, pain and loss of life your weapons will cause.”

Mother Teresa visited the Soviet Union for the first time in 1986, after the Chernobyl nuclear disaster and met with Russian Orthodox priests during her trip to the then USSR. 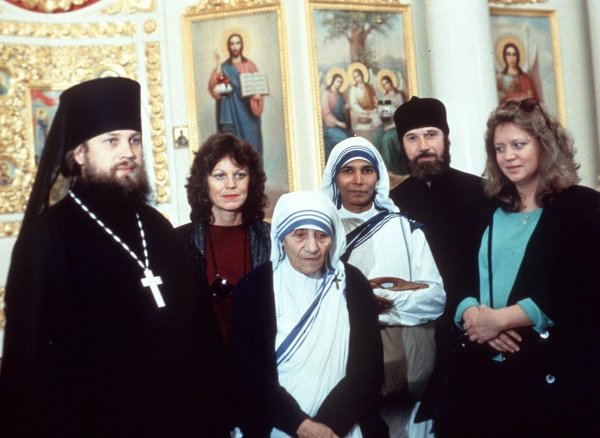 “The biggest disease today is not leprosy or tuberculosis, but rather the feeling of being unwanted.”

She took her solemn vows on 14 May 1937, while serving as a teacher at the Loreto convent school in Entally, eastern Calcutta. Teresa served there for almost twenty years and in 1944 was appointed headmistress. On 10 September 1946, Teresa experienced what she later described as “the call within the call” to help the sick and poor. 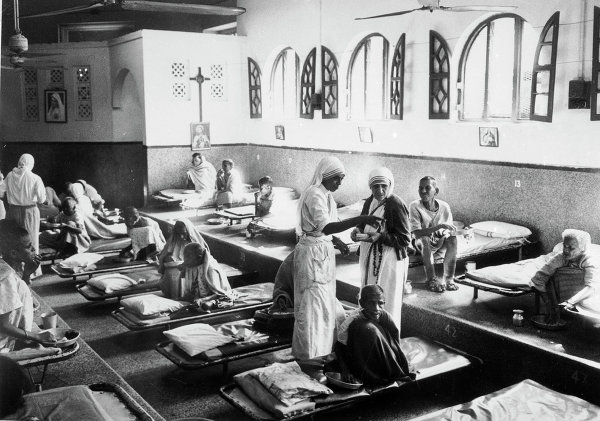 “Do not wait for leaders; do it alone, person to person.”

The Nun was honoured by both governments and civil organization. Among others, she was granted and honorary citizenship of the United States on November 16, 1996. And had an honour to meet top leaders of many countries of the world. 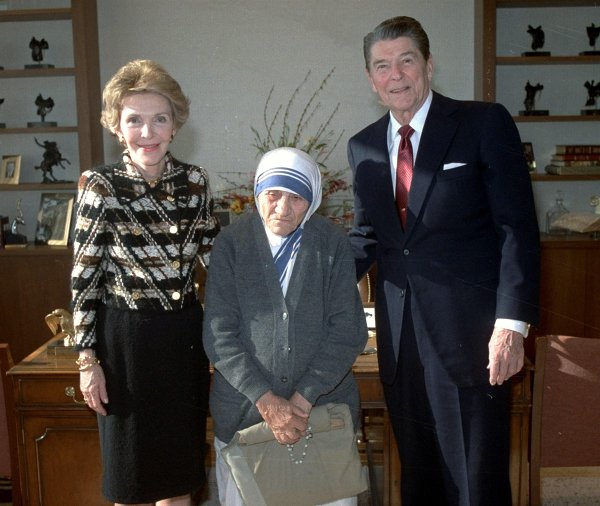 © AP Photo. Mother Teresa of Calcutta with the former US President Ronald Reagan (R) and his wife Nancy (L) at Reagan’s office in Los Angeles

“Don’t look for big things, just do small things with great love….The smaller the thing, the greater must be our love.”

Mother Teresa devoted her life to caring for the sick and poor. In 1979 she was awarded with the Nobel Peace Prize, which she at first declined because considered herself unworthy. In 2003 she was beatified as “Blessed Teresa of Calcutta”. 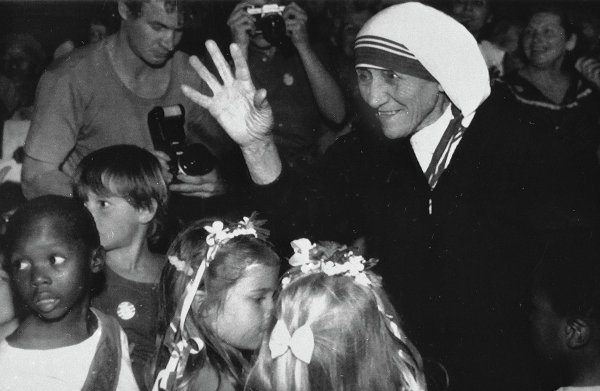 “Be kind to each other in your homes. Be kind to those who surround you. I prefer that you make mistakes in kindness rather than that you work miracles in unkindness. Often just for one word, one look, one quick action, and darkness fills the heart of the one we love.”

In 1979 she accepted the Nobel Peace Prize “for work undertaken in the struggle to overcome poverty and distress, which also constitutes a threat to peace.” 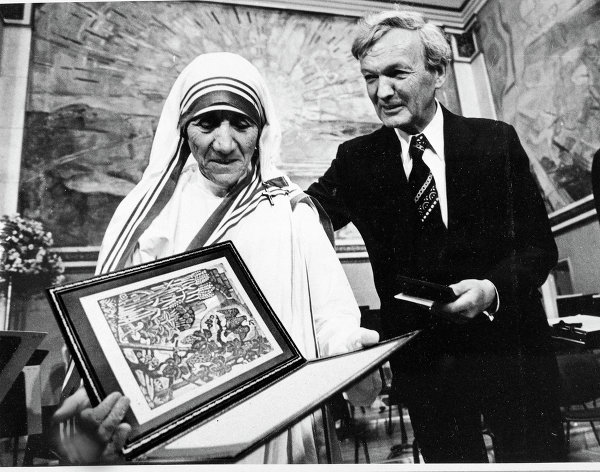 © AP Photo. Mother Teresa (L), with Chairman of the Norwegian Nobel Committee, John Sanness, during the award ceremony in Oslo on December 10, 1979. Behind them is the famous wall painting “Sun Rise” by Edvard Munch

“Spread love everywhere you go; first of all in your house. Give love to your children, to your wife or husband, to a next door neighbor. Let no one ever come to you without leaving better and happier. Be the living expression of God’s kindness; kindness in your face, kindness in your eyes, kindness in your smile.” 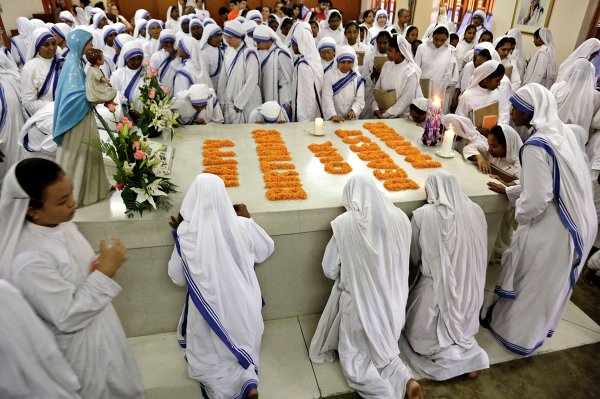 © AP Photo Bikas Das. Nuns of Missionaries of Charity pray beside the tomb of Mother Teresa during a mass on her birth anniversary in Kolkata, India.