Source: SkyNews.com
Natalya Mihailova | 05 September 2016
Mother Teresa of Calcutta, known as the "saint of the gutters" during her life, has been declared a saint of the Roman Catholic Church by Pope Francis, fast- tracked to canonisation just 19 years after her death. 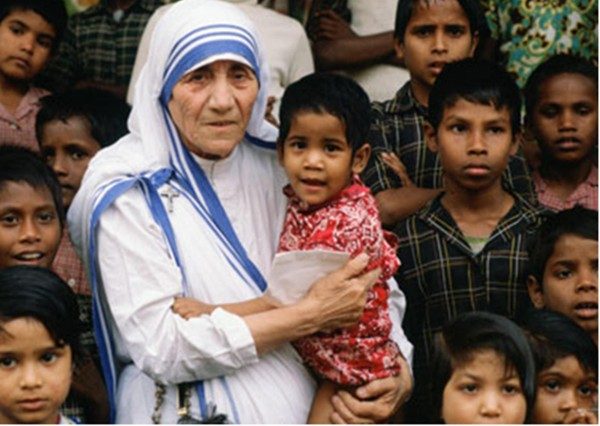 Tens of thousands of pilgrims packed St. Peter’s Square at the Vatican for a service to honour the tiny nun, who worked among the world’s neediest in the slums of the Indian city now called Kolkata and become one of the most recognisable faces of the 20th century.

A Nobel peace laureate, her legacy complements Pope Francis’s vision of a humble church that strives to serve the poor, and the festivities in her honour are a highlight of his Holy Year of Mercy, which runs until November 8.

Standing under a canvas hung from St. Peter’s Basilica showing the late nun in her blue-hemmed white robes, the Pope said she was a “dispenser of divine mercy” and held world powers to account “for the crimes of poverty they created”.

“For Mother Teresa, mercy was the salt which gave flavour to her work, it was the light which shone in the darkness of the many who no longer had tears to shed for their poverty and suffering.”

Around 120,000 people attended the ceremony, according to Vatican estimates, celebrating the life of a woman who Francis said it might be difficult to call “saint” as people felt so close to her they spontaneously used “mother”.

“Everything she did gave an example to the entire world,” said 17-year-old student Massimiliano D’Aniello, from Grosseto, Italy.

“She showed we can’t all do everything, but little gestures made with so much love are what’s important.”

Critics say she did little to alleviate the pain of the terminally ill and nothing to tackle the root causes of poverty. Atheist writer Christopher Hitchens made a documentary about her called Hell’s Angel.

She was also accused of trying to convert the destitute in predominantly-Hindu India to Christianity, a charge her mission repeatedly denied.

But Pope John Paul II, who met her often, had no doubt about her eligibility for sainthood, and put her on the route to canonisation two years after her death instead of the usual five.

As pilgrims from across the world gathered at the Vatican along with delegations from more than a dozen governments, the canonisation was also celebrated in Skopje, the capital of modern Macedonia where Mother Teresa was born of Albanian parents in 1910 and became a nun aged 16.

No major ceremony was scheduled in Kolkata, where the first MoC mission was set up in 1952, but prayers, talks and cultural events were planned, in an atmosphere of quiet pride.

The church defines as saints those believed to have led such holy lives they are now in heaven and can intercede with God to perform miracles – two of which are needed to confer sainthood.

She is credited with healing an Indian woman from stomach cancer in 1998 and a Brazilian man from a brain infection in 2008. The Brazilian, Marcilio Andrino, and his wife attended the ceremony and were blessed by the Pope.