The Schism Deepened Due to a New Schism 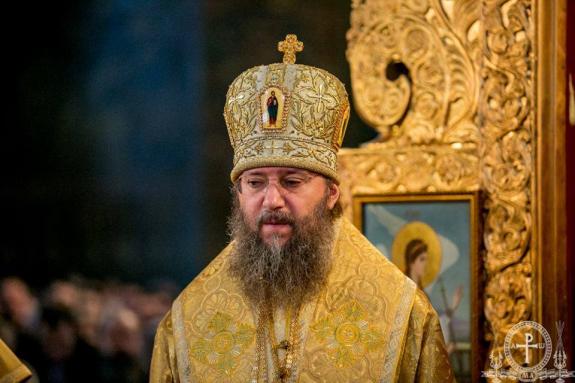 Today we observe with sadness how the “healing” of the schism promised by Phanar became a rough and cynical aggravation of it, that inflicts deep wounds on the body of the Church of Christ and provokes enmity and tension both in the church and secular society.

Is this how fatherly love and care are manifested?

Such a “father” for the Orthodox Church and Its flock is the Patriarchate of Constantinople. The one who in the union of brotherly love with other Local Orthodox Churches should protect church unity and take care of Its canons.

Since the beginning of its formation, the long-suffering Ukrainian Orthodox Church has been tormented by schism, and now former brothers in Christ joined offenders and impostors in the struggle against the Truth.

The Church doesn’t fight just for the purity of doctrine and dogmas throughout Its existence. It does this in order to preserve and provide Christians with the full possibility of a mystical union with God. This is the meaning of human life.

Earlier divisions occurred because of the heresies i.e. dogmatic and religious disputes of the Nestorians and the Monophysites, the iconoclasts and the Monothelite and so on. However, today the reasons for modern church splits, including those happening before our eyes are centered around another issue.

The bottom line in the splits of recent times is not the religious aspect, but political, social and ethnic interests, which became the key factors determining the life of the Church.

This is purely a secular approach without taking into account the religious and mystical nature of the Church. It is considered by the Orthodox Church heresy and is known as phyletism that is based on political, ethnic or cultural interests.

Today we are witnessing a gross violation of the canons established over the centuries and accepted by Orthodoxy.

The Church has been held hostage to political games, ambitions, lies, slander, and geopolitical divisions.

But this by no means diminishes It. The Church is only getting stronger and stronger. New confessors and intercessors appear.

It was always like this in the times of persecution and will be forever.

One for All, All for One

Firstly, Church unity lies in the communion of the Local Churches, which is manifested in the Eucharistic communion and in a brotherly, friendly attitude towards each other in solving common and internal issues.

Secondly, it lies in an effort to preserve the purity of faith from false teachings and schisms and to protect it from enemies.

According to the famous theologian Vladimir Lossky, “The catholicity of the Church, far from being the privilege of any see or specific centre, is realized rather in the richness and multiplicity of the local traditions which bear witness unanimously to a single Truth: to that which is preserved always, everywhere and by all. Since the Church is catholic in all her parts, each one of her members—not only the clergy but also each layman—is called to confess and to defend the truth of tradition; opposing even the bishops should they fall into heresy.”

History repeats itself. There have always been brave men, risking their lives in the name of truth, faith, love, and loved ones.

And there were those who didn’t stand the test of temptations and betrayed everything they once held dear.

This is a terrible human tragedy. As a rule, a person doesn’t realize what they have done and hides their wrongdoing in the guise of  “pious effort”, justifying and whitewashing themselves in every possible way.

But if one can deceive a person with tales, the Lord cannot be deceived. Therefore, lets leave to Him the Last Judgement and the last word.

The Church, as a loving Mother, suffers from the mistakes of Her children and worries about every child, even if they reject and persecute Her.

But if a person prefers not good, but evil, not truth, but lie, not the real Church, but a surrogate, then this is their personal choice that they themselves are responsible for.

If such a person convinces others of their rightness, let us recall the words of F. Dostoevsky, “If someone proved to me that Christ is outside the truth and that in reality the truth were outside of Christ, then I should prefer to remain with Christ rather than with the truth.”

The main goal of the Church is to help a person achieve union with God. In the Church everything is wisely thought out, tested by time, and confirmed by the lives of many saints in order to contribute to this goal.

The Church encourages a person to have a constant spiritual acuity and opposition against wiles of the devil from the outside and inner passions.

As a result of the proper guidance of the Church, human nature changes and transforms. And therefore the spiritual endeavor of each of us is very important for the entire Orthodox world.

In order to know God, one must approach Him, and it is impossible to understand Him without uniting with Him. The path of the knowledge of God is becoming like Him. And this should be the biggest concern for Christians. Everything else should be just a background, nothing more. And the Church faithfully and selflessly leads us to our intended goal.

This is the main difference between the true Church –  the salvific ark – from the false churches.