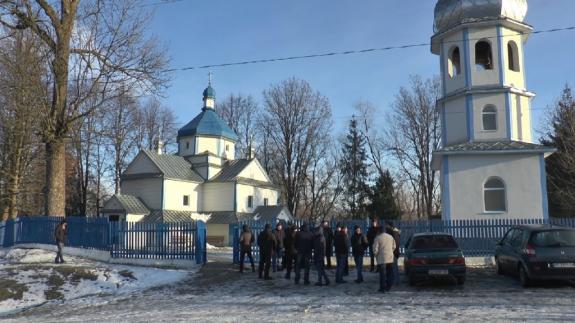 One of the seized churches: Annunciation Church in the village of Pokhovka

Despite repeated statements of Ukrainian President P. Poroshenko that – in spite of the creation of a new church structure inspired with his participation – each person will be free to choose to which church to come and that there will be no forcible captures of monasteries, churches and other facilities, new reports keep coming about actions of radicals and local authorities aimed to effect a lawless transfer of the Ukrainian Orthodox Church parishes to the jurisdiction of the schismatic association which has received ‘autocephaly’ from Constantinople.

Thus, proponents of ‘the Orthodox Church of Ukraine’, supported by radicals from the Svoboda all-Ukraine nationalistic association and the chairman of the village council, have captured an old church of St. Nicholas the Wonderworker at the Vorsovka village, Malin district, Zhitomir region, the UOC information and education department reports. The capture of the church building which belongs to the religious community of the Ukrainian Orthodox Church, took place on January 13, 2019, in the presence of over a dozen Malin police officers.

Earlier, on January 10, the Vorsovka villagers had a meeting during which a conflict broke out between the OCU supporters and the community of the canonical Church, which does not wish to join the schismatics. Aggressive activists decided to take possession of the UOC community property. However, parishioners did not let the crown enter the church. Then, with the support of village council chairman Petr Podruchniy and head of the Malin Svoboda branch Nikolay Polinovsky, the church was sealed up. As a result of the incident, the rector of the canonical Church’s community, Archpriest Vasily Simchuk, suffered a hypertonic crisis and was hospitalized.

Archpriest Vitaly, rector of the church of the Protecting Veil in Malin, was appointed as acting rector of the parish. On January 13, together with parishioners he planned to hold a prayer service by the St. Nicholas church. However, the OCU supporters prevented them from coming close to the church, and the service had to be held right in the street. ‘I do not know how divine services will be celebrated next but we will do all that is possible for us to serve if not in the church, then by it’, Father Vitaly commented on the situation.

Supporters of the schismatic ‘Orthodox Church of Ukraine’ have also captured the St. Michael church in Krasnovolya village, Manevits district in Volhyn, reports the site of the Ukrainian Orthodox Church diocese of Volhyn. The incident took place on January 13, 2019, before the Sunday service planned to be presided over by Bishop Nafanail of Volhyn and Lutsk. Radicals blocked the entrance to the church and, after exerting pressure on the rector of the community, Archpriest Andrey Genalyuk, took possession of his keys. There were threats and offences addressed to the clergy and faithful of the Ukrainian Orthodox Church.

After the St. Michael church was captured, new locks were installed in the church doors. Bishop Nafanail, clergy and laity who had gathered for the service had to go for the liturgy to a neighbouring village.

The law-enforcement officers who came to the scene recorded an offence and accepted an appropriate statement from the rector of the community. The diocese of Volhyn demanded that an urgent legal action should be taken in response to the actions of the initiators and captors of the St. Michael church at the village of Krasnovolya.

Provocations have continued with regard to churches belonging to the canonical Church.

On January 15, an act of vandalism was committed with regard to the stone fence of the Cathedral of the Holy Transfiguration in Sumy, a 19th-centure architectural monument, the diocese of Sumy internet portal reports. Unknown people made a provocative inscription on the fence with defamatory statements against the canonical Church. ‘The fence of the cathedral is an architectural monument to be safeguarded by law. But it did not stop the malefactors who stir up enmity on religious grounds by propagating ungrounded accusations’, the comments made on the incident in the diocese.

During the night of January 13, activists of the C14 (‘Sich’, Ukr. Cossack Host) nationalist organization wrote slogans on churches of the Ukrainian Orthodox Churches in Lvov and wrote about it in social media, Vesti-ukr.com reports. Vandals damaged the fence and gates of the Cathedral of St. George and the door of the Holy Prince Vladimir Equal-to-the-Apostles in the Sikhov neighborhood, which had been restored after a fire. Similar actions with regards of the churches of the canonical Church in Lvov were also committed earlier, in November 2018.