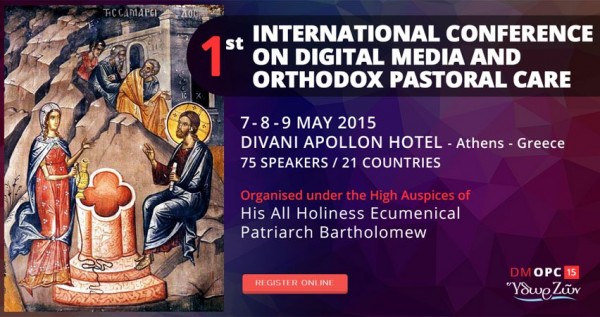 Athens, Greece: In the last two decades, we as people have witnessed an unprecedented explosion as regards the evolution of electronic means of communication and provision of information. Local Orthodox Churches and Orthodox believers the world over have not been slow to make their presence felt in this novel scene, using the media as best they can in order to spread the word of God, the patristic tradition and Orthodox Theology.

The ‘Saint Maximos the Greek’ Institute for the Research, Preservation and Promotion of Spiritual and Cultural Traditions, which has been active for a number of years in this field, in particular through the spiritually-orientated multilingual website ‘Pemptousia’ (www.pemptousia.gr), decided to convene an international conference, in co-operation with the Web portals ‘Orthodox Christian Network’ (www.myocn.net), an Agency of the Assembly of Canonical Bishops of the United States of America, and ‘Bogoslov’ (www.bogoslov.ru), of the Department of Religious Education of the Patriarchate of Moscow. At this conference, an evaluation will be made of the work done by the Orthodox in the field of pastoral care through digital media, while reflections will also be presented about the dynamics of the Orthodox presence in this particular area, with the further prospect of discussion regarding the evolution of Orthodox Christian discourse in cyberspace.

The Conference is the first of its kind in this particular field and will be held on 7-8-9 May 2015, at the Hotel Divani Apollon Palace in Vouliagmeni, Athens.

Apart from bringing together those responsible for Orthodox Digital Media, the further aim of the Conference is the coordination of efforts towards a more effective way of delivering the Gospel word to users of the Internet, to the glory of God. It will also aim to be the point of departure for a well-constructed and common effort to propagate the values of the Orthodox Christian tradition among all people of good will.

There will be 75 experts speaking at the conference on this theme, Orthodox clergy and laity from 21 countries, representing all the jurisdictions of the Orthodox Church.

The conference is organized under the High Auspices of His All-Holiness, the Ecumenical Patriarch, Bartholomew.