Source: RT
Natalya Mihailova | 03 July 2016
A muezzin has performed an Islamic call to prayer for the first time in 81 years in one of Istanbul’s iconic monuments, Hagia Sophia, famous for its grandiose dome. 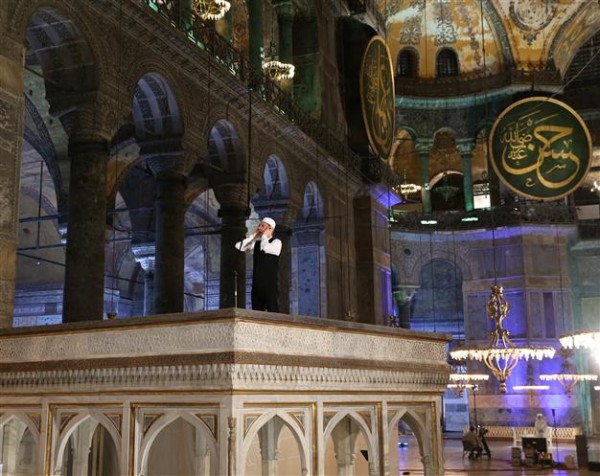 The traditional call to prayer, the adhan, has been played from Hagia Sophia’s minarets for the last four years. However, the muezzin had chanted it from a prayer room, not from inside the historic landmark, which began as a church in 537. The cathedral was converted into a mosque in 1453, when the Sultan of the Ottoman Empire conquered Constantinople, and ending up as a museum in 1935.

Hagia Sophia was the world’s largest cathedral for almost ten centuries until Seville Cathedral, a Roman Catholic cathedral in Spain, was completed in 1520.

Last month, Ankara allowed Hagia Sophia to be used for Islamic Ramadan prayers. The move came under fire from Athens, however, where Greece’s New Democracy opposition party called the prayers“provocative and incomprehensible.”

“The decision of Turkish authorities to schedule the Koran reading in Hagia Sophia for the next month, has virtually transformed it into a mosque for the first time in 80 years. It is a provocative and incomprehensible act and shows disrespect against Orthodox Christians across the world and is not in line with Turkey’s European course,”

the coordinator of Foreign Affairs and Defence of New Democracy, Dora Bakoyannis, and head of the party’s Foreign sector Ioannis Kefalogiannis, said in a joint statement.