Can You Hear the Beauty of Nature? 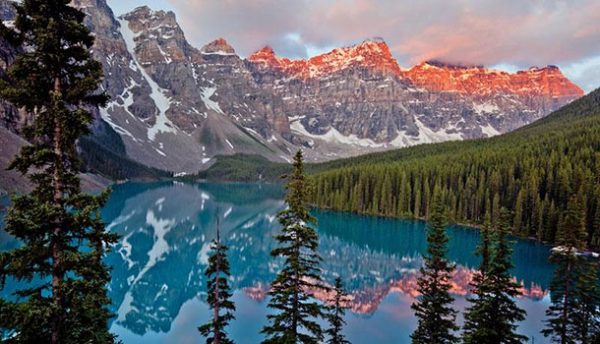 If you’re wondering what you can do or should think about the environment, then what follows is for you. In fact, every teen and young adult should pause on a regular basis – look up from their phones – and appreciate the glory and majesty of creation which is all around us.

While we live in a world with amazing gadgets, less diseases, bigger houses, fancier cars and the latest handheld devices, we are also surrounded by wondrous flowers, trees, mountains, lakes, streams, birds, animals and the beauty of God’s creation.

I have to ask – are you as connected to God’s wonders as you are to your devices?

Being so connected to our devices comes at a cost, because the world around us – and the environment in particular – is changing now, dramatically, and quickly all around us. we can all take part in  caring for the beauty of God’s creation, but where do we start?

A professor and mentor from my days in seminary used to say, “Listening is love in action.” I have returned to this phrase many times over the years for a variety of topics and situations, but I think listening is also important when we consider what God’s creation has to say to us.

What should we listen to?

Listen to the Scriptures

Genesis begins with the story of creation – God’s creation of the earth – make a list of the verses which speak directly to creation and our place within it. Read them with an open mind, on your knees, and ponder them in your heart. Don’t think of the act of creation as God’s gift to us to use however we see fit. The earth is not here for us to subdue, abuse or misuse. Remember, John the Evangelist tells us that “God so loved the world that He gave His only begotten Son…”

Jesus Christ came for the salvation of all creation – to restore all of it to that full communion and beauty as it was in the beginning. The Book of the Psalms celebrates the beauty of God’s creation and reminds us that His works are wonderful, boundless, and intended to be good – shouldn’t we see nature in that same Light?

Listen to the Life of Christ

Jesus Christ – the second person of the Holy Trinity – entered creation, became part of it, and through it, saved us and entirety of the cosmos.

We not only proclaim, as part of our Gospel, that God became Man, but we also say that in doing so he took on the atoms, the water, the soil, and the stuff of earth which comprise the physical body. And after He took on our sins, was crucified and died, He destroyed death – resurrecting His earthly body and restored and transformed all of creation.

He then enthroned all this (and us) after His Ascension. There is no greater honour God can give the cosmos than to enthrone it in Himself. Think of what that means – God loves the cosmos so much, that he died so He could restore everything, so that we could be like Him in caring for those around us and the very planet we live on, so that we may walk in newness of life and one day, eternal life with Him.

Listen to the Saints

Read what the fathers and mothers of the church say about the Christian life, read their lives to understand how they saw the love of God in all things. Have you seen the icon of St. Seraphim with a bear? Or of St. Herman of Alaska taming the winds of the sea? These examples are not some exception to the rule, but should inspire us to think about how we can experience the love of God flowing throughout the cosmos.

Listen to the Indigenous Peoples

As Orthodox Christians on this continent, we have the unique heritage of the native peoples of Alaska who adopted Orthodox Christianity from St. Herman and those early missionaries who arrived in 1794. The Aleuts, Tlinkit, Athabascan, Yupik and other Alaskan peoples have relied on the world around them for centuries to provide sustenance, shelter and their basic needs.

When the native peoples of Alaska were baptized and Chrismated, they understood more fully, the wonders of God’s creation – they already understood the value of taking only what they needed, sharing with their neighbors, but now they learned the value of thanking God for the gifts they received – appreciating what they had received as gifts provided by Our Lord.

We can learn quite a bit from these ancient people who don’t rely on limitless supplies of fast food and electricity, but live modestly and with an appreciation for the world around them. Their intimate knowledge of the natural world can also teach us to recognize how the earth is changing around us now.

Listen to the Scientists

There are some who say that science is at odds with the teachings of the church. Yet, just as we must read the scriptures and seek to grow closer to God, we must listen to the knowledge and experience of the scientists and climatologists to truly understand the earth’s complex ecosystems and how we are affecting them.

These people have devoted both their personal and professional lives to understanding the earth and how humanity’s limitless consumption and abuse of creation is accelerating transitions and creating extreme conditions. They deserve our respect, and most of all deserve our attention. Listening to them is not easy, but is necessary, because doing so will help us understand the true gravity of how we are changing our earthly home.

Listen to the Earth

The first time I realized that God had something to say to me, I was 12 years old and hiking in the Kananaskis region of the Rocky Mountains to the west of Calgary, Alberta, Canada. My family and I had spent a long weekend trekking to a remote lake high in the alpine, reached only by a steep shale traverse up a mountain pass. The pass presented itself only at the end of an already long day of hiking, and climbing it seemed to take forever.

When the trail levelled, however, and the view opened, my eyes widened at the sight waiting for us. An alpine meadow stretched as far as I could see, flanked by two snowy peaks, and crammed with red paintbrushes, purple crocuses, blue forget-me-nots, pink moss casinos, white Wedgeleaf, yellow varileaf, fuchsia and shooting stars. These wildflowers were bright with the sun under a wide blue sky and swooning this way and that in the haphazard breezes from the slopes.

I had seen such beauty before, but what I had stumbled into as a dorky pre-teen boy was indeed a new planet, not a different one, but this planet seen through eyes of wonder and awe. Thomas Treherne claims that, “if we would see this world as the angels do, we would be ravished and enraptured as the angels are.”

Those who have ‘ears to hear’ will discover the beauty, wonder, joy, and life-giving nature of the God which our earth, and the whole creation, proclaims in myriad ways all the time – and more consistently than we do, to be honest.

Listening and Living … and Doing!

As Orthodox Christians, we need to live the way God intends, freely and responsibly.  It means picking up  a piece of trash, or recycling whenever possible.  We can honor the presence of God in the flowers and animals.  ‘We can live very well upon the earth,’ as the Akathist to God proclaims.  We can begin to uphold the love which God displays for the earth in our own lives and personal witness.  Each of us will do so uniquely, but we are each capable of it.

Knowing this and taking this journey requires listening – to God, and seeing His creation through His eyes, as wonderful, beautiful, holy and sacred.

In the words of the fourth century Christian father, St. John Chrysostom, “Creation is not evil. It is both good and a pattern of God’s wisdom, power and love of mankind…. It leads us to knowledge of God (and) makes us know the Master better.” And as St. Isaac the Syrian says, God brought the world into existence in love, and it is in love that God is going to bring it to that wondrous transformed state.

Fr John (Kaleeg) Hainsworth lives in Vancouver, BC and can usually be found exploring the sacredness of nature. His book “An Altar in the Wilderness” is available for purchase here: http://www.rmbooks.com/book_details.php?isbn_upc=9781771600361

Infant Baptism in the Orthodox Church

The ancient, apostolic and biblical practice of baptizing infants and children has been challenged by some in recent…