Pochaev Lavra: Government’s Actions are Leading to Destruction of Monasticism in Western Ukraine 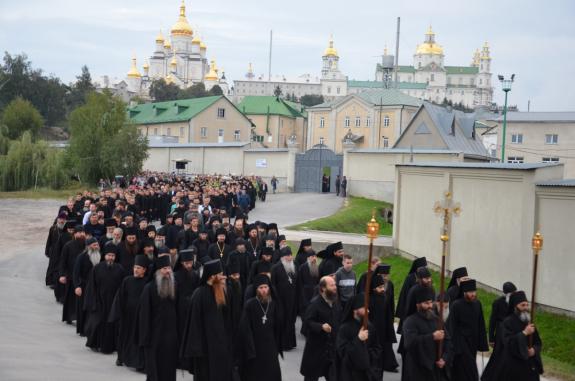 The events taking place around the Dormition Pochaev Lavra show that the Ukrainian government’s actions are aimed at the destruction of monasticism in western Ukraine. This is said in the statement of the monastery’s brethren published on Pochaev.org.ua.

“We are forced to state that at present the Ukrainian authorities are using communist methods of struggling against the Orthodox Church,” the statement says.

The government structures and controlled media put pressure on the monastery.

For example, the Pochaev city council has refused to carry out the decision of the court to give land to the Pochaev Lavra for the brethren buildings. For a short period of time, the prosecution authorities instituted several unwarranted criminal cases against the monastery.

“It is worth mentioning that starting from 2000 it is the third attempt to turn this holy place into a museum,” the statement says.

At the present time, the brethren stated, “the current Ukrainian government has taken a course to seize property from the Holy Dormition Pochaev Lavra and transfer it to the newly formed church organization, and as a result – the destruction of monasticism in the territory of western Ukraine.”

In this regard, the brethren asks Orthodox Christians to “increase their prayer for the sake of peace and the unity of believers in the body of the canonical Church.”