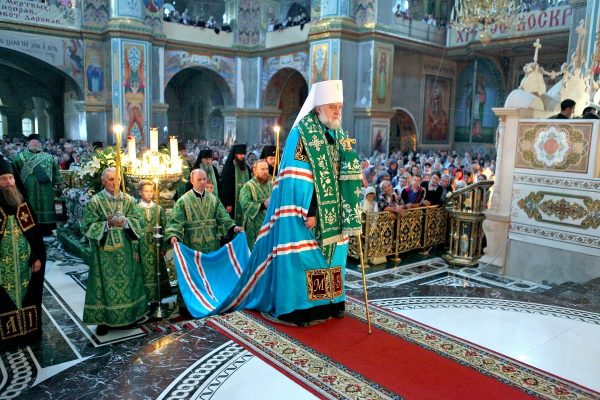 The statement has been posted on the Holy Dormition-Pochaev Lavra’s official website, calling on the faithful to be ready to help protect the holy habitation.

“Considering the current situation and information that we have available to us and the threats of violence that are spreading, it is clear that we will have to endure something. Therefore, we ask first of all for your prayerful and moral support, and apparently your physical presence will be needed,” His Eminence Metropolitan Vladimir of Pochaev writes in his address to the faithful.

His Eminence Metropolitan Paul of Vyshogorod and Chernobyl, the abbot of the Kiev Caves Lavra, has also warned about a planned attack against the monastery on October 14. His Eminence was soon thereafter added to the database of the governmental Mirotvortets website which gathers personal information on supposed “enemies of Ukraine.” The Pochaev abbot was already added to the site earlier this year.

The abbot recalled that Orthodox Christians have “had to testify, confess their faith, and protect their holy sites” at various times throughout Church history.

“Whoever cares about the fate of the Holy Dormition-Pochaev Lavra, of our holy site of Orthodox Ukraine—and not just Ukrainian, but a global holy site—be ready to protect it,” the abbot called, adding that the monastery will let the faithful know when help is needed.

“As for the tomos, let us be attentive so as not to be led into confusion. Our Ukrainian Orthodox Church has a canonical status, determined by the tomos of October 29, 1990 from the Mother Church,” Met. Vladimir said, encouraging the faithful.

Note that while the Ecumenical Patriarchate touts its historical role as the Church from which Kievan Rus’ received Baptism, the Ukrainian Church currently considers the Russian Orthodox Church to be its Mother Church, as it exists as a canonically autonomous body within the Russian Church.