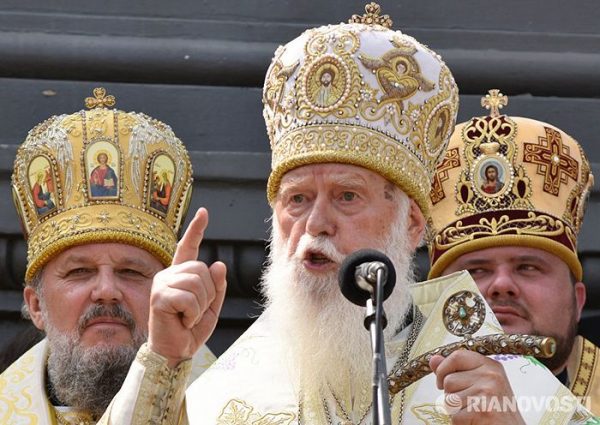 Meeting today in Kiev, the Synod of the schismatic “Kiev Patriarchate” (KP) has officially changed the title of its primate, “Patriarch” Philaret, to include the Kiev Caves and Pochaev Lavras under his jurisdiction.

The primate’s new official title, as given on the site of the KP, is “His Holiness and Beatitude (name), Archbishop and Metropolitan of Kiev—Mother of the cities of Rus’, and Galicia, Patriarch of All Rus’-Ukraine, Svyaschenno-Archimandrite of the Holy Dormition Kiev Caves and Pochaev Lavras.”

Thus, the KP Synod is declaring that “Patriarch” Philaret has jurisdiction over the Kiev Caves and Pochaev Lavras, although they are canonically under the omophorion of His Beatitude Metropolitan Onuphry of Kiev and All Ukraine, the primate of the canonical Ukrainian Orthodox Church.

Philaret and his followers and nationalistic radicals have continually proclaimed that they will take the Lavras for themselves.

Writing on his personal Facebook page, KP Press Secretary, “Archbishop” Evstraty Zorya, argues that the Kiev Caves and Pochaev Lavra have long been stavropegial monasteries of the Kiev throne according to decisions of the 1991 Council of the Ukrainian Orthodox Church and the 1993 Council of the KP.

“Therefore,” Zorya writes, “the specification of this fact in the full title of the primate is only a statement of that which has already been until now.”

This claim to the ancient and venerable monasteries comes after the Holy Synod of the Ecumenical Patriarchate announced that it had removed the anathema placed upon Philaret by the Russian Orthodox Church and had restored him to his hierarchical office. Philaret was a metropolitan of the canonical Church, becoming patriarch in his schismatic organization.

Representatives of the Ecumenical Patriarchate have clarified that they consider Philaret to be the “former Metropolitan of Kiev,” but he and his organization continue to consider him an active patriarch, with jurisdiction in Ukraine.

Constantinople’s statement also appealed to all in Ukraine to “avoid appropriation of churches, monasteries, and other properties,” which the Synod of the KP ignored in today’s decision.