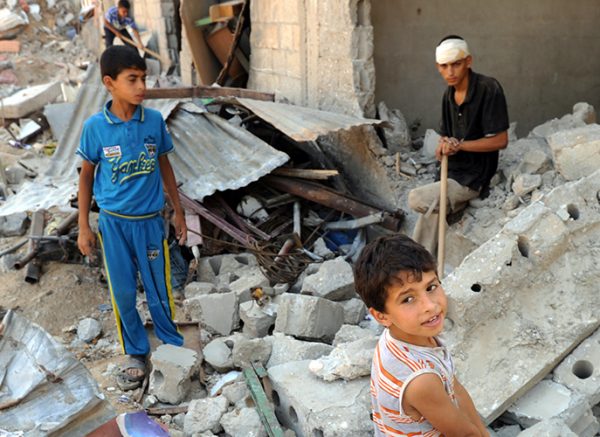 The International Day of Innocent Children Victims of Aggression is a United Nations (UN) observance each 4 June. It was established on 19 August 1982.

It is a sad reality that in situations where armed conflict breaks out, it is the most vulnerable members of societies – namely children, who are most affected by the consequences of war. The six most common violations are recruitment and use of children in war, killing, sexual violence, abduction, attacks on schools and hospitals, and denial of humanitarian access.

On 19 August 1982, at its emergency special session on the question of Palestine, the General Assembly, “appalled at the great number of innocent Palestinian and Lebanese children victims of Israel’s acts of aggression”, decided to commemorate 4 June of each year as the International Day of Innocent Children Victims of Aggression.

The purpose of the day is to acknowledge the pain suffered by children throughout the world who are the victims of physical, mental and emotional abuse. This day affirms the UN’s commitment to protect the rights of children. Its work is guided by the Convention on the Rights of the Child, the most rapidly and widely ratified international human rights treaty in history.

Following on the ground-breaking Graça Machel report, which drew global attention to the devastating impact of armed conflict on children, in 1997 The General Assembly adopted 51/77 Resolution on the Rights of the Child. It was a landmark development in efforts to improve the protection of children in conflict situations. This signalled the start of a new consensus among Member States, on the need for dedicated attention, advocacy and coordinated effort, by the international community, to address the vulnerabilities and violations faced by children in conflict-related situations.

Resolution 51/77 built on existing General Assembly efforts to protect the rights of children, including through the Convention on the Rights of the Child and its Optional Protocol, and the annual Rights of the Child resolutions. And it established the mandate of the Special Representative of the Secretary-General for Children and Armed Conflict.

In recent years, the number of violations perpetrated against children have, in many conflict zones, increased. More needs to be done to protect the 250 million children living in countries and areas affected by conflict. More must be done to protect children from targeting by violent extremists, to promote international humanitarian and human rights law, and to ensure accountability for violations of the rights of children.

The 2030 Agenda for Sustainable Development provides us with the universal masterplan to secure a better future for children. The new agenda includes for the first time a specific target (16.2) to end all forms of violence against children, and ending the abuse, neglect and exploitation of children is mainstreamed across several other violence-related targets.

Most viewed articles
Seven Lessons for the New Year from St. Seraphim of Sarov198
The Perfectionist120
New Jersey Governor Signs Bill Legalizing Abortion Up To Moment of Birth83
140th anniversary of repose of St Antipas the Athonite of Calapodești celebrated in Roman56
Metropolitan Hilarion Celebrates the 20th Anniversary of His Episcopal Consecration47
The Way of Christ Is The Way of Love46
Most popular authors
Priest Luke A. Veronis198
Protopresbyter Themistoklis Mourtzanos120
Ryan Foley83
Aurelian Iftimiu56
Pravmir.com team47
Fr. Theodore Stylianopoulos46