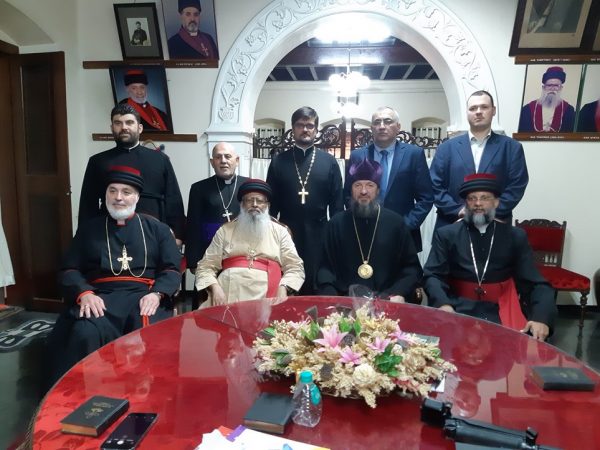 From November 13 to 18, 2019, the 4th meeting of the Commission of Dialogue between the Russian Orthodox Church and the Assyrian Church of the East took place in Thrissur, Kerala State, India.

The Moscow Patriarchate delegation included Bishop Clement of Krasnoslobodsk and Temnikov, co-chairman of the Commission; Hieromonk Stefan (Igumnov), secretary for inter-Christian relations of the Department for External Church relations; and S. Alferov, DECR, secretary of the commission. Representing the Assyrian Church of the East were Bishop Mar Awa Royel of California, secretary of the Holy Synod of the Assyrian Church of the East, co-chairman of the Commission; Cor-Bishop George Kanon Toma, cleric of St. Andrew’s Church in Glenview, Illinois, USA; Priest Ephraim Alkhas, secretary of the commission; and Deacon Roland Bidzhamov, cleric of the Assyrian diocese of Northern Iraq and the CIS.

Metropolitan Mar Aprem Mooken of India, the oldest member of the Synod, and Bishop Eugene Kyriakos, vicar of the Metropolis of India, welcomed the participants in the meeting on behalf of His Holiness Catholicos-Patriarch Mar Gewargis III of the Assyrian Church of the East, who recalled with warmth his repeated visits to Russia, with the latest one made in late May-early June 2014, during the historic visit of the late Catholicos-Patriarch Mar Dinkha IV to the Russian Orthodox Church in June 2014.

The commission discussed the implementation of agreements reached at the previous meeting in October 2018 in Sankt-Petersburg and defined the further cooperation program to be approved by the Supreme Church Authority.

The meeting noted the successful development of inter-church contacts in the academic field, in particular, in students’ exchanges, as in autumn 2018, the first representative of the Assyrian Church of the East, Rev. Addai Daniel Nazlu, was enrolled in Moscow Theological Academy. It is planned to involve representatives of the Assyrian Church in academic conferences organized by the Moscow Patriarchate theological schools and to invite delegates of the Russian Orthodox Church to similar events held by the Assyrian Church’s educational institution, in particular, in the recently opened Nisibis Theological College in Sydney, Australia. In 2021, the 2nd Summer Institute will be organized in Moscow for young Assyrian clergy and student. Its program will include visits to synodal establishments of the Russian Orthodox Church and introduction to ecclesiastical and historical-cultural sights in Russia.

Proposals were worked out for establishing contacts to be held in 2020 between special structures responsible for the development of youth ministry including an exchange of delegations and joint participation in issue events, including in the diaspora dioceses.

The commission deemed it important to organize theological consultations for defining a range of topical dogmatic, historical-cultural and ethical issues.

The coordination of cooperation in giving humanitarian aid to communities in Iraq and Iran and the assistance in carrying out projects for restoring defiled shrines and ruined social infrastructure remain the most important aspects of the bilateral interaction in these countries. Acknowledging the leading role played in this area by the Working Group for Aid to the Syrian Population under the Presidential Council for Cooperation with Religious Associations, the commission underscored the importance of cooperation between the Russian Orthodox Church and the Assyrian community in Iraq, including contacts with the Assyrian Church East Relief Organization (ACERO). Among important steps made in this area were the visits made in November 2018 to Russia by Assyrian Bishop Erbil Mar Abris Juhann Tjari as member of the delegation of the Council of Christian Leaders in Iraq and the meeting which took place between Metropolitan Hilarion of Volokolamsk and the administrator of the diocese of Northern Iraq and the CIS, Metropolitan Mar Iskhak Joseph in June 20, 2019, in Moscow.

The participants in the meeting expressed deep concern for the acts of violence committed in Ethiopia against the clergy and laity of the Ethiopian Church.

Timed for the commission meeting was the second Joint Colloquium, which took place on November 15 in Thrassur at the conference center of the Metropolis of India of the Assyrian Church of the East. It was devoted to the past and present life of the Russian Orthodox Church. The event was attended by clergy and staff of the Metropolis of India, seminarians and monastics, as well as parishioners of local churches. Bishop Clement spoke of the history and the present state of the bilateral dialogue. His remarks were followed by issue reports by Hieromonk Stephan (Igumnov) on “External Relations of the Moscow Patriarchate” and by S. Alferov on “The Russian Orthodox Church: Millennium-long Feat of Confession to the Glory of the Name of God”. After the reports, members of the Moscow Patriarchate delegation answered numerous questions from the audience.

The program of the commission meeting included visits to churches, educational institutions and social establishments of the Metropolis of India and to holy places associated with the visit to Kerala of St. Thomas who is believed to have generated the Indian Christianity.

In conclusion of the commission meeting, a joint communique was adopted. The next meeting will take place in autumn 2020 in the territory of the Russian Orthodox Church.

On November 18-19, the delegation also visited old shrines, parishes and charitable organizations of the Malankara Church and the St. Thomas Seminary in Kottayam at the invitation of the Catholicos Mar Baselios Marthoma Paulose II of the Malankara Church, who warmly received them at the patriarchal residence and asked them to convey best wishes to Patriarch Kirill and to thank him for the generous hospitality accorded him during his visit to Russia in August-September 2019.