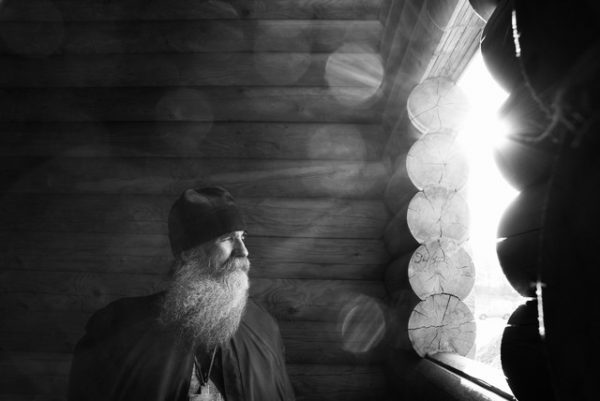 When I was still living in Romania I was going for confession to a hieromonk in a monastery not very far from my hometown. One day I took Maria‚ my daughter‚ with me. We participated in the services‚ got a blessing from the elder and on our way home she asked me‚ after being very silent and observant all the way: Dad was that man Jesus?

A similar confusion  happened to St. John the Baptist when the people of Israel confused him with Messiah: “this is the record of John‚ when the Jews sent priests and Levites from Jerusalem to ask him‚ Who art thou? And he confessed‚ and denied not; but confessed‚ I am not the Christ. And they asked him‚ What then? Art thou Elias? And he saith‚ I am not. Art thou that prophet? And he answered‚ No.” (John 1:19-21)

More so‚ in the tradition of iconography all the saints are depicted with features that resemble the icon of Christ‚ with the same transfigured sensory organs and heavenly appearance. They all look like they are members of the same family.

All these cases of “mistaken” identity share the same root: a prophet‚ a saint and a monk‚ all resemble the Son of God. How is it possible?

As humans we all share the image of God planted in us from our creation. We all share in fact this divine identity but‚ under sin‚ God’s face is covered in us and we become‚ at least outwardly‚ someone else.  Through sin we lose our resemblance with God and we take the appearance that the godless world around has painted on us.

The world itself has long lost its identity. It ceased to be a vehicle for man’s edification in God and was transformed in a purpose to itself‚ an apple of discord and enmity between people. The devil‚ the greatest identity thief‚ diabolos‚ the deceiver‚ has succeeded to sell us‚ starting with Adam and Eve a reality that has nothing to do with the true reality of God‚ but it pleases the senses and promises everything and beyond. We got hooked by his promises and now we live in this world with the illusion that it can fulfill us‚ we struggle everyday to achieve meaningless goals‚ missing completely our true purpose and destiny.

A saint on the other hand is a person that has uncovered the image of God in him and has found his place in the world by acting according to His likeness. A saint shows to the world his true identity‚ imitating Christ almost to the point of confusion.  “I am crucified with Christ: nevertheless I live; yet not I‚ but Christ liveth in me: and the life which I now live in the flesh I live by the faith of the Son of God‚ who loved me‚and gave himself for me”. (Gal 2:20). A saint is a person that has renounced to himself and yet his identity and alterity have been fulfilled above any imagination.

This is not‚ however‚ limited only to the saints. After all we are “a chosen generation‚ a royal priesthood‚ a holy nation” (1 Pet. 2:5-9). But‚paradoxically‚ in order for us to become who we really are‚ we should let Christ take over. “He must increase‚ but [we] must decrease.” (John 3:30) until we reach the “measure of the stature of the fullness of Christ” (Eph 4:1’).  We might seem to live plentifully in this world‚ but it is only an illusion “For ye are dead‚ and your life is hid with Christ in God. When Christ‚ who is our life‚ shall appear‚ then shall ye also appear with him in glory.” (Col 3:3)

We are not ourselves and we are not truly living  until we are with Christ. Don’t let the world tell you otherwise; our true identity is fulfilled only by being Christians.  Christians don’t just believe differently than others‚ they exist in a different reality; a genuine reality in which God becomes man and man becomes god. This is God’s edition of reality‚ the only one true and original.

I am Christian therefore I am!