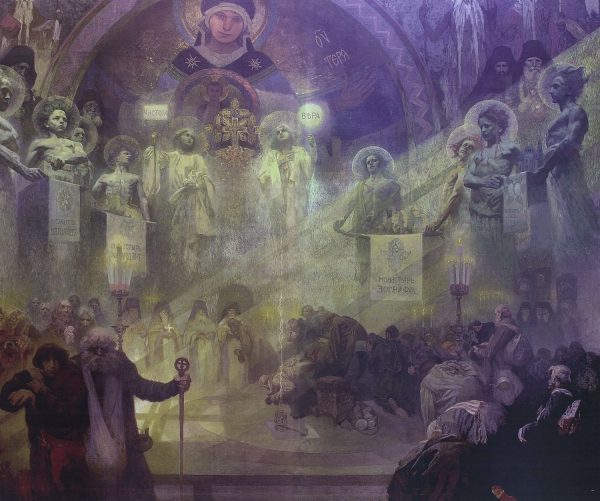 “Not guilty by reason of insanity.”

Such a ruling in a modern court-of-law makes complete sense, even if some would argue that the bar for measuring insanity is rather unclear. It carries with it an understanding that we are not always responsible for our actions. In modern thought, we consider that the exercise of free-will is an essential part of wrong-doing. In that sense, a crime is a misuse of the will. There are “accidental” crimes, such as manslaughter, though we puzzle over this as a “crime.”

Such thinking reveals some of the aspects of our modern notions of morality. We have imported these notions into Christian thinking, creating something of a distortion. Imagine the case of a morally perfect human being – one who has never committed an infraction of the “moral law.” To the surprise of many, such an individual would not constitute a model Christian, nor would they be an example of the goal of the Christian faith.  It is not that the faith strives towards something less – rather, it is simply that such a model is the wrong example. Christ did not die in order to make us morally perfect. “God became man so that man could become God,” is the language of the Fathers. “Becoming God” is something that transcends the notion of moral perfection.

Over the years, particularly as I have served as a confessor, I have come to see the moral struggle as deeply problematic. It’s easy to concentrate on outward actions (“doing the right thing”) while, at the same time, doing such actions for all the wrong reasons and in a manner that is profoundly removed from “god-like” behavior. Christ points to just such a disconnect in his condemnation of the Pharisees.

St. Paul understands such false morality as a problem. He describes himself in the years before his conversion as “blameless concerning the Law” (Phil. 3:6). That “blamelessness” would have included his pursuit and persecution of Christians.

The outward measure of morality is as convenient as it is shallow. It often tells us little about ourselves, and may even mask much darker problems within the heart. Anyone who has lived with a narcissist can witness to the emptiness of a morality that is merely outward. In some hands, such morality becomes a weapon.

However, when we turn inward and begin to ask why we do what we do, moral measurements become rather murky. What we describe as the “will” is often unclear. There is an “insanity” about all of our actions (including the good ones as well). In the popular imagination, we speak of ourselves as “persons” (an ill-defined term) who have a “will” (also ill-defined) who “choose” things. When we begin to examine each of these ill-defined things we discover that they slip through our fingers. What constitutes the thing we call “person”? Is it simply the subject of our thoughts and actions? What is its relationship to the soul (and what is the soul?). What constitutes my will? Is it the source of every action, some cognition that occurs before any action is taken?

We have habits of speech that are shaped in the matrix of our culture. Sadly, that matrix serves the needs of consumerism. When we speak of “person” we often mean “shopper,” and by “choose” we mean “buy” (or variations thereof). Those who work in marketing know that these categories are largely their own creation. They manufacture “needs” as well as “desires.” It serves an ephemeral modern category called “happiness.” Everything that pushes the dopamine in our brain is seen as good, our “happiness” or “personal fulfillment” being little more than a thinly disguised hedonism.

The words, “person,” “will,” and the like, have a deep root in Orthodox Tradition. Recovering their proper meaning is important. The Orthodox Tradition would tend to view what we term “person” as something that is being revealed, and something of an “end” towards which we are moving. St. Sophrony of Essex gave especial attention to personhood, and described it as a fullness towards which move. It is certainly the case that there is a “point” within us that can be described as the subject of the “self” (the “soul”) from the very beginning of our existence. It is this “point” that we name as “I.” The faith teaches us, however, that this “I” is also something that God names for us. Our “person,” and our “name,” are gifts from God. More than that, they are “eschatological,” belonging to the “last things.”

“Beloved, now we are children of God; and it has not yet been revealed what we shall be, but we know that when He is revealed, we shall be like Him, for we shall see Him as He is.” (1 John 3:2)

“For you died, and your life is hidden with Christ in God. When Christ who is our life appears, then you also will appear with Him in glory.” (Col. 3:3–4)

The self and the soul are not objects of our own creation. However they may be understood, they exist as a gift to be received, something to be welcomed.

In Romans 7, St. Paul wrestles with the “moral” problem. He wants to do good, but fails. He wonders, then, who is doing the “wanting” within him. He posits something of a problematic existence:

St. Paul’s thoughts belong to a conversation within Judaism that had already been taking place for some hundreds of years. There was a discussion of what was known as the yetzer ha ra and the yetzer ha tov (the bad impulse and the good impulse). Thoughts on their origins were all over the map. In time, within the Christian tradition, something of a settled understanding was formed, though it is less settled than many imagine.1

In that all of this describes an experience that is dynamic and changing (in which sense we ourselves can be described as a “movement”), it is difficult to formulate fixed terms. By the same token, it is problematic to reduce our spiritual life to the sort of moral nostrums common in our culture. A story related in the life of St. Paisios is very helpful for thinking about this:

There was once a monk who lived on Mount Athos, in Karyes. He was drinking and getting drunk every day, scandalizing the pilgrims. After a while he died and this relieved some of the believers who went and told elder Paisios they were pleased that finally this huge problem was resolved.

Father Paisios replied that he knew about the monk’s death, because he saw a whole battalion of angels who came to pick up his soul.

Pilgrims were amazed, and some protested and tried to better explain to the elder who this person was, thinking that he did not understand.

“This monk was born in Asia Minor, during the time when the Turks were still gathering all the boys as slaves in the lands under their occupation. To avoid being taken by the Turks, his parents took him with them during the harvesting season, and in order to stop the crying and let them work, they put some plum brandy in his milk for him to fall sleep. Consequently, he grew up and became an alcoholic without his permission. At one point he found an elder who told him to do prostrations and prayers every night and implore the Virgin Mary to help him to reduce a glass from his daily alcohol intake.

After a year he succeeded, with repentance and struggle, to go from 20 to 19 drink glasses. Fighting continued throughout the years and finally reached 2-3 glasses, which still caused drunkenness.

The world has seen, over time, a monk alcoholic who scandalized the pilgrims, but God saw a warrior who fought a long battle to reduce a passion. ”

This “dynamic” account of the monk’s life stands as a contradiction to modernity’s common approach to morality. Indeed, the “morality” of those who saw the monk condemned him. The holy elder saw the dynamic of a soul being revealed as a champion.

How should we then live?

Give attention to the goal of your life as measured by your desire for God. No matter how many times you fall, get back up. Faith, in large part, can be understood as loyalty. Choose sides (choose God). Every time you fail, call out for God who alone can save us. For the most part, heroes of the faith will not be seen until all things are revealed. As much as possible, refrain from judging others. Assume that they are struggling secretly as well.

Remember that our battle is with the passions. They are defeated and healed through the acquisition of the Holy Spirit. It is this that saves the souls around us.

The word “frontier” has long been associated with certain aspects of American mythology. “Frontier Days” is short-hand for…

I have often used the example of riding a bicycle as an image of knowing God. There’s no difficulty learning…

The 1984 film, Amadeus, tells the story of the child genius, Mozart. IMdB describes it in this manner: The…

Most viewed articles
Critical Theory, Social Justice, and the Attempt to Disfigure the “Transfiguration”163
The Tattoo on Our Being151
350 Thousand Believers Take Part in Cross Procession in Kiev129
Patriarch Kirill Urges Believers to Fight New Idolatry in Their Own Lives116
The Frontier of Personhood115
Bell-Ringing Unites Believers from Different Countries on the Day of the Baptism of Rus (+Video)50
Disoriented23
Saint Macrina the Younger as a Model for our Lives1
Most popular authors
Pravmir.com team295
Eric Hyde163
Fr. Andreas Agathokleous152
Archpriest Stephen Freeman115
Fr. Stephen Powley22
Protopresbyter Fr. George Papavarnavas1