Source: Orthodox Christian Reflections
Words have power! Not only the words of Jesus and those who have a rank of authority, but also our own words and the words of all people. Words are to be chosen and used very carefully. Words can do a lot of good and also cause a lot of damage.
Fr. Theodore Stylianopoulos | 13 July 2022 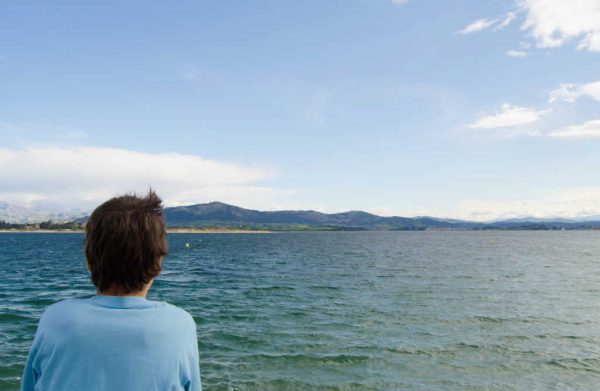 Today’s Gospel reading (Mat. 8:5-13) narrates a remarkable encounter between Jesus and a soldier, a meeting that ended with a welcome blessing and a stern warning. The soldier was a Roman officer, a centurion, the leader of one hundred men. Centurions were the backbone of the Roman army. A kind man, this centurion came to Jesus to ask for a healing for his ailing servant.

The first remarkable aspect of this encounter is that the centurion, a Gentile and not a Jew, was knowledgeable of and sympathetic to the Jewish religious heritage. Although a member of the hated occupying Roman army, in Judea, he approached Jesus in an amiable and humble spirit. More importantly he had taken time to know about the work of Jesus. He believed in Him as Lord and pleaded: “Lord, my servant is lying paralyzed at home, in terrible distress.”

Jesus responded in a like amiable spirit. He did not test the man’s faith nor judge him for serving in the Roman army, a most violent and cruel force in the ancient world. It was an encounter between two peace-loving people who, though coming from different races, different backgrounds, and totally different occupations, engaged in meaningful conversation ending with a positive result. In that encounter, there is a lesson here for us and for our times.

To the request for a healing Jesus replied: “I will come and heal him.” Some interpret the Lord’s words, now rendered in Greek, as a question, as if to ask “Shall I, a Jew, come and heal him?” Whatever the original meaning, the centurion’s answer to Jesus in no way indicates any concern or discomfort over racial differences between them. Rather the man was awed by the nature of Jesus’s divine authority and expressed a profound sense of unworthiness. He again called Jesus “Lord,” and said “Lord, I am not worthy to have you come under my roof; but only say the word, and my servant will be healed.”

“Only say the word, and my servant will be healed!” The soldier believed that Christ could heal the servant from a distance, by uttering a word of healing. As a soldier, the centurion enjoyed the authority of his rank, and by means of words he directed others to do his bidding. He believed that Jesus as Lord could do superbly greater deeds by the power of His word. Jesus was amazed at the centurion’s faith, and granted his request: “Go; be it done as you have believed.” At that very moment the centurion’s servant was healed.

Words have power! Not only the words of Jesus and those who have a rank of authority, but also our own words and the words of all people. Words are to be chosen and used very carefully. Words can do a lot of good and also cause a lot of damage. I remember a personal rebuke of my father who tried and failed to teach me the Greek alphabet when I was only a toddler. He said in disgust: “You don’t have what it takes; I will make you a sheep herder and you can roam the hills as you please.” To this day, eighty years later, I still feel the weight of those painful words on my soul. Of course, I also remember many encouraging and uplifting words of kind teachers and thoughtful mentors, for which I am deeply grateful.

Words have power! They have power because, whether carefully chosen or not, they convey our thoughts, feelings and intentions. They transmit like an electric current the dynamics of communication between us. Their effects impact and deeply influence our lives for good or for ill. When we hear someone speaking peaceably and respectfully, whether in a family or the public, we relax and admire that person for her or his wisdom and patience. When we hear someone speaking sharply, using harsh or angry language, we tighten up and fear that the worse is to come.

Words have power! They have power because they embody what we are, the reality in which we live, whether we live in God’s truth and love, or whether we live in the shadows of falsehood and enmity with one another. The closer our words are to truth and to love, the more real and constructive they are, benefiting others and us. Otherwise our words, although they may be shouted with boldness and a lot of noise, can be false words, words empty of love and truth, words with negative, destructive effects.

The lesson here? Let our words follow the ways and teachings of God’s word according to the message of Christ and the wisdom of the Orthodox tradition. Everything in the universe is an expression of God’s plan, design, His will and wisdom. However, not everything in the Bible or the Orthodox tradition is necessarily true and uplifting. Our discernment ought to be guided by Christ’s teaching of love and forgiveness, the generosity and humility of the saints, the doctrinal discernment of Orthodox theology. Christ is the highest revelation of God’s love and truth. He is the incarnation of the eternal Word of God, the ultimate wisdom behind all things, who imparts light and life to the world.

Here are challenging words by Jesus. “Everyone who hears my words and does them will be like a wise man who builds his house on a rock.” (Mat. 5: 24) “Abide in My love and keep My commandments.” (John 15:9-10) “If you abide in my word, you are truly My disciples, and you will know the truth and the truth will make your free.” (John 8:32) “On the day of judgment all will render account for every careless word they utter; for by your words you will be justified and by your words you will be judged.” (Mat. 12:36)

The story of the centurion presents the soldier as a shining example of faith. Christ is amazed at the faith of this Gentile man and He praises him with a glowing comment, “not even in Israel have I found such faith!” Christ then utters a stern warning to His followers about who will and who will not share in the final joyous banquet of God’s kingdom: “I tell you, many will come from east and west and sit at table with Abraham, Isaac, and Jacob in the kingdom of heaven, while the sons of the kingdom will be thrown into the outer darkness; there people will weep and gnash their teeth,” (Mat. 8:10-12)

These are awesome and heavy words, but they are the words of Jesus who deeply cared for Jews, Gentiles and every human being of every race under the sun. Christ’s words anticipated and foretold the creation of the early Church as a community of Jews and Gentiles, and the gradual movement of the Church to mostly being a Gentile Church in history. This is the sober lesson: even the “sons of Abraham,” the “sons of the kingdom,” those who belonged naturally to the people of God and enjoyed God’s gifts and blessings, by the very reasons of familiarity and routine, can neglect their spiritual treasures by taking them for granted, and thus risk losing their own ultimate destiny.

Are Orthodox Christians in a similar situation today? Across the country converts have come to Orthodoxy filled with zeal and gratitude for discovering the Liturgy and all the treasures of Orthodoxy. And many Orthodox born into the Faith appear to be struggling spiritually, often showing indifference and passivity in worship. The example of the Gentile centurion is a wake-up call to all of us to be not only careful with our words but also to be fervent in our faith and our worship of Christ. True worship is both by prayer and by a life of service in honor of Christ. May the witness of the unnamed but winsome Roman centurion be an inspiring example to us. And may the memory of this honest and faithful soldier be blessed. Amen.