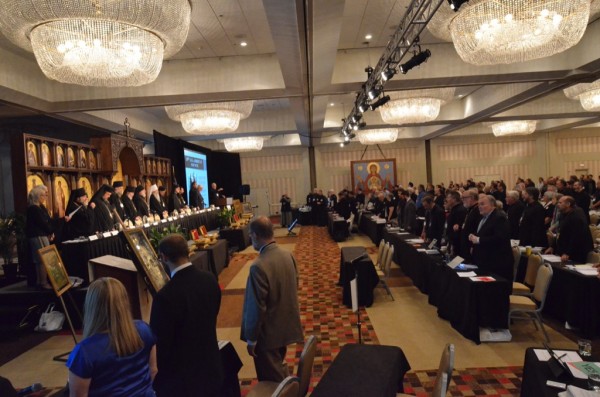 Delegates to the 18th All-American Council here overwhelmingly adopted proposed revisions to the Statute of the Orthodox Church in America in a 473 to 15 vote during the AAC’s second plenary session on Tuesday morning, July 21, 2015.

The resolution to adopt the revised Statute was made by Gregory Nescott, Allison Park, PA and seconded by Archpriest Paul Jannakos, Fenton, MI.  Archpriest Peter Baktis, Princeton, NJ, the AAC’s clergy Vice-Chair, opened the floor to discussion, after which ballots were cast by the 488 voting delegates.

Other highlights of the session included video presentations from the Dioceses of Alaska and New England and the Albanian Archdiocese.

The Diocese of Alaska video detailed the life and legacy of Matushka Olga Michael, whose sanctity of life has been widely recognized in recent years.  His Grace, Bishop David of Sitka and Alaska reported on the ministries undertaken at Saint Herman’s Seminary and throughout the diocese and expressed his appreciation for support received from the Orthodox Christian Mission Center, International Orthodox Christian Charities and the entire OCA in helping the diocese to “expand the Mission.”

His Eminence, Archbishop Nikon of Boston and the Albanian Archdiocese, introduced the video presentation on these dioceses which highlighted various ministries and outreach activities.

A report on the work of the OCA’s Metropolitan Council also was given by Archpriest Dr. Chad Hatfield, Archpriest David Garretson, Dr. Paul Meyendorff and Maureen Jury.

An audio recording of the Second Plenary Session may be accessed at Ancient Faith Media.