Source: OCA
Natalya Mihailova | 24 July 2015
After the celebration of the Hierarchical Divine Liturgy early Thursday morning, July 23, 2015, and during the AAC’s fifth Plenary Session, delegates to the 18th All-American Council adopted a resolution expressing the Orthodox Church in America’s solidarity with Christians suffering persecution in the Middle East and calling on governments to do everything possible to ensure their safety. 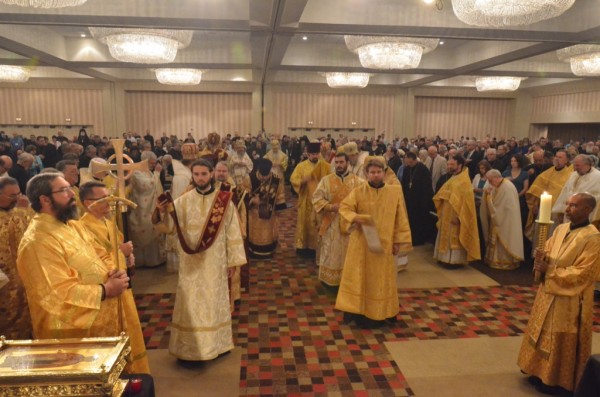 Presented by Dr. Paul Meyendorff and adopted by acclamation, the text of the resolution reads as follows.

“Whereas recent developments in the Middle East have caused great suffering to Christians in the area, leading to numerous deaths, desperate living conditions and mass movement of refugees, we, gathered at the 18th All-American Council in Atlanta, Georgia, express our solidarity and support for all suffering peoples in the area, especially our brothers and sisters in Christ, and we call on our respective governments to take vigorously all possible political and humanitarian measures to ensure their safety and the survival of Christianity in the lands where it first took hold.”

In a video produced by International Orthodox Christian Charities, introduced by Rada Tierney, the plight of the three million refugees and persons displaced from Syria and the measures being taken by the Patriarchate of Antioch and IOCC to alleviate their suffering were highlighted.  In response to a recommendation by Archpriest John Zdinak, delegates spontaneously donated nearly $12,000.00 to assist IOCC in its ongoing ministry in the Middle East.

Earlier, Judge E. R. Lanier, AAC Lay Vice-Chair, opened the plenary session by recognizing the retired clergy in attendance.  He also recognized Dr. Constantine Kallaur, who was a member of the OCA delegation that received the Tomos of Autocephaly in Moscow in 1970.  His Beatitude, Metropolitan Tikhon presented a pocket watch to Archpriest Myron D. Manzuk, Minneapolis, MN, in appreciation of his many years of dedicated service as All-American Council Manager.

Continuing the series of diocesan presentations, videos depicting the life of the OCA’s Romanian Episcopate, the Diocese of the South and the Archdiocese of Washington DC were aired.

Archpriest Eric G. Tosi and Priests David Rucker and John Parker described the first-ever OCA Mission School, held in Detroit in the spring of 2015.  The highly successful week-long school was entirely supported by a bequest of nearly $1 million received by the OCA.  A second Mission School will be offered in a different region in 2016.

Newly elected representatives for open Metropolitan Council and Pension Board positions were announced at the conclusion of the session.

In related news, delegates once again attended their choice of ten different workshops on topics ranging from Clergy Self Help and Parish Finances to Preaching on Campuses and the Use of the Web.  The workshops were also offered on Wednesday afternoon to afford participants to attend multiple sessions.

Protodeacon Peter Danilchick described the work of the Assembly of Canonical Orthodox Bishops of the United States of America and the direction in which it is heading.  Alexei Krindatch, the Assembly’s Research Coordinator, reported on his recent survey detailing giving trends in Orthodox Christian parishes throughout the US.  At the outset, he noted that, of all the jurisdictions that participated in the survey, the OCA and its clergy were the most cooperative and responsive.  From the data submitted, he concluded that there are two major factors that lead people to give more to the Church—greater Orthodox unity and cooperation and a greater emphasis on mission.  [Several selections of Mr. Krindatch’s various past survey results may be found here.]