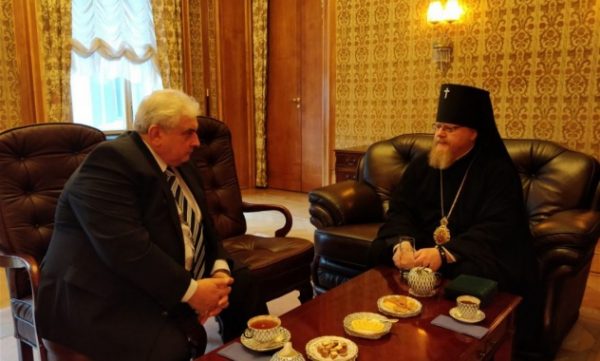 On February 9, 2018, Archbishop Tikhon of Podolsk, Administrator of the Diocese of Berlin and Germany, met with H.E. Sergei Nechayev, the newly appointed Ambassador Extraordinary and Plenipotentiary of the Russian Federation to the Federal Republic of Germany.
They were joined at the meeting, which took place at the Russian Embassy in Berlin, by Archpriest Mikhail Divakov, secretary of the diocese, and Rev. Yevgeny Murzin of the diocesan information department.

Experience of cooperation of the Russian Embassy with the diocese of Berlin and Germany was discussed; various aspects of cooperation in future were considered; and willingness to develop fruitful constructive relations was expressed.

Archbishop Tikhon presented Ambassador Nechayev with an icon of the Mother of God as a token of their meeting.