Source: The Path of Orthodoxy, May 2012
Now, even though we have “great numbers” in church, particularly on the great holidays, one wonders if our joy resembles that of the early Christians we read about in the Bible?
Priest Milovan Katanic | 17 April 2015 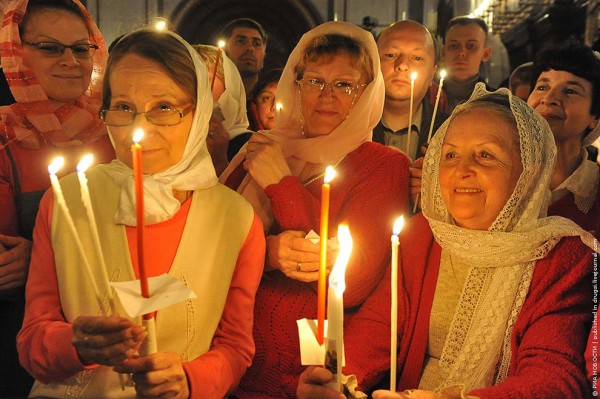 I find it quite peculiar that the gospels read on the days after Christmas as well as Pascha both deal with some sort of journey. On the second day of Christmas we read about the family’s flight into Egypt while on the third day of Pascha we hear of the famous journey to the village of Emmaus. I contrast this with the fact that churches worldwide are packed on both of these joyous holidays while on the ensuing days it would seem that there is some sort of flight taking place. I don’t know exactly where but apparently it’s away from the church.

There are a number of characteristics of this post Paschal period. Perhaps the most noticeable are the bright vestments and the fact that we can’t seem to stop singing “Hristos Voskrese”. Yet, one detail that might go overlooked is the liturgical use of the book of the Acts of the Apostles during the epistle reading on the Sundays after Pascha. There is a reoccurring image in most of these readings that we can’t help but notice. Namely, we hear things such as: “and believers were increasingly added to the Lord”(Thomas Sunday); “Now in those days, when the number of the disciples was multiplying…” (Myrrhbearing Sunday); “and a great number believed and turned to the Lord” (Samaritan Woman).

Now, even though we have “great numbers” in church, particularly on the great holidays, one wonders if our joy resembles that of the early Christians we read about in the Bible? I know of many who exude pride in their Orthodox faith and Serbian heritage and customs. But is pride and joy the same? To have joy and, subsequently to rejoice in the faith implies a level of participation. In other words, we rejoice not only because we have discovered the wonderful news of the Gospels. Rather, our joy comes from an active life in the faith. To be proud is different. In the first place, pride has been a negative impulse throughout Scriptures beginning with the first sin of Adam of Eve. The devil used it to lie to man about God and as such it is a way that we lie to ourselves, to some degree or other. And so St. Paul tells us that if we are to boast about anything let us boast in the “cross of our Lord Jesus Christ, through which the world has been crucified to me, and I to the world” (Gal. 6:14).

Jaroslav Pelikan once wrote that the Bible is not only to comfort the afflicted, at times it “afflicts the comfortable”. And so, the attitude of Christians described in these first days after Pascha, the new day, during our post-Paschal liturgical readings poses the question: Just how real is our faith if we’re proud of our Christian name but don’t make an effort to live according to it; if we don’t rejoice in the Lord? Or, just how comfortable are we in our faith? Let’s not forget that the Kingdom of Heaven doesn’t belong to the sleeping and lazy but is “taken by force” (Matt. 11:12). After all, to “boast in the cross of our Lord” requires more than just a feeling of pleasurable satisfaction in it. We must also take it up, deny ourselves and follow Christ.

While there are those who cross the threshold of their churches only from time to time, on the more special occasions of life, we are reminded that every Sunday is the Lord’s Day and reason for us to rejoice and give glory to Him. Nay, every day and every moment of our lives. Or, as the Apostle Paul says, “Rejoice in the Lord always. Again I will say, rejoice” (Phil. 4:4).

Most viewed articles
Strong Orthodox Presence at the 2022 March for Life158
As the End Draws Near – Silence122
Do We Act Differently Than Others?108
Patriarch Porfirije Thanks the Russian Church for Participation in Restoring Serbian Churches102
Metropolitan Onuphry: “The Key to the Doors of Paradise is Repentance”58
March for Life participants optimistic for a post-Roe America: ‘This is just the beginning’50
A Stone Thrown at God and Your Neighbor31
Sunday of the Samaritan Woman2
How We Worship: the Struggle of the American Experience1
The Apostles’ Fast and Theology1
Most popular authors
Pravmir.com team318
Archpriest Stephen Freeman122
Priest Luke A. Veronis107
Ryan Foley50
Protopresbyter Themistoklis Mourtzanos31
Maria Trushanina1