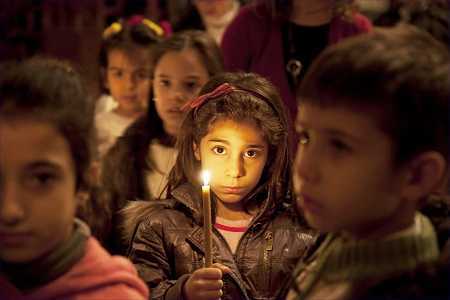 ALEPPO : A special prayer for peace by Syrian Christian children, Catholics and Orthodox, is the “best and most beautiful response” to the violence of war and fundamentalism, said Alsabagh Ibrahim, 44, the Franciscan keeper and pastor of the Latin parish of St Francis in Aleppo, the capital of northern Syria, which has been under heavy bombardment for weeks.

Speaking to AsiaNews, the clergyman welcomed “with joy” Pope Francis’ words to “pray not only for our children, but for the little ones of the world,” for those who live in “a war situation, who suffer, who are victims of exploitation”. Hence, his parish has joined the prayer for peace in his country on Children’s Day.

War broke out in Syria in March 2011 starting with protests against Syrian President Bashar al-Assad. Since then, 280,000 people have died (some sources claim 470,000), and millions more have been displaced.

At least 80,000 civilians have died, including 14,000 children (as of March 2016). Another 250,000 children live under siege in brutal conditions in what some activists and NGOs describe as ‘open-air prisons’. Almost 2.5 million children under the age of five are at risk of malnutrition.

In order to raise international awareness about the violence that affect children, the Catholic and Orthodox Churches in Syria have promoted a special day of prayer, which Pope Francis mentioned in last Sunday’s Marian prayer.

Hundreds of children gathered today in Damascus, Aleppo, Homs, Tartous and Marmarita asking for the grace of peace and a future of hope. In addition to prayer, the Latin parish of St Francis planned to celebrate a special Mass dedicated to children, in the late afternoon.

“The church is decorated with balloons,” Fr Ibrahim explained.  “Parents will be present with their children, at least 300, but perhaps many more”.

“Together they can make their voices heard against war, exploitation, and violence” in union and communion “with all the children of the world.”

“Our hope,” he added, is that “they can grow up as the child of Nazareth, in grace and wisdom.”

To alleviate suffering and the trauma of war, the Latin parish of St Francis in Aleppo also organised a summer camp that welcomes hundreds of children every day. “We want to get them out of their homes so they can overcome fear,” Fr Ibrahim said.

The daily activities include “a catechesis about Jesus, some theatre with representations of corporal and spiritual acts of mercy from the Gospels, games, entertainment, songs and dances with a religious theme and manual work, as well as moments of prayer.”

“There is also a cafeteria where they can eat meat, drink milk and find other foodstuffs they might not have at home. . .  they are children who want to respond with life to the violence of war.” (DS)–Asia News