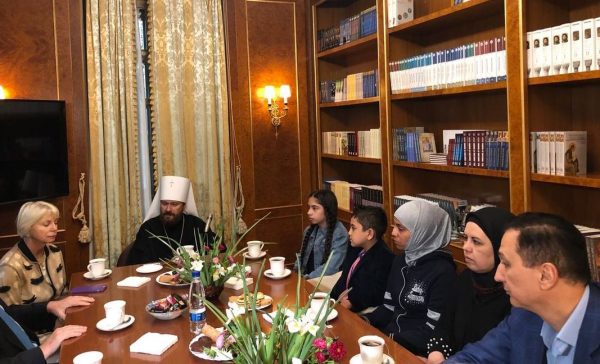 On July 14, 2019, Syrian children, who are under medical treatment in Moscow, attended the liturgy celebrated at the church of Our Lady the Joy of All the Afflicted-in-Bolshaya Ordaynka by its rector, Metropolitan Hilarion of Volokolamsk, head of the Moscow Patriarchate department for external church relations (DECR). Seven-year-old Bashar Canaan and thirteen-year-old Sidra Zarour came with their parents to Russia on June 30 to undergo prosthetics and rehabilitation under the charity project “There are no foreign children”.

This project is carrying out a programme for aid to children including those who were injured because of the armed conflicts in the Middle East.

A year ago, Bashar was playing together with his brothers in a Damascus suburb when a mine exploded nearby. He was the only surviving child in the family but he lost his legs. Sidra lost her legs in An explosion in Aleppo three years ago. At that time, Russian military urgently brought the girl to Moscow where she received functional prostheses. Now they have become too small for her and she came to Moscow to replace them.

After the Divine Liturgy the children met with Metropolitan Hilarion of Volokolamsk over tea. His Eminence promised the young Syrians a comprehensive rehabilitation support; even after they come back home, Russian medics will continue monitoring their health and new life.

“I want you to be strong and healthy young people so that you could serve your country, and we will help you in it”, he said to Sidra and Bashar.

Present at the meeting over tea were also representatives of the charitable foundations “Poznanie” [Knowledge] and “Linia zhizni” [The Life Line], which finance the aid to the children and their coming to Russia for medical treatment at the Children’s Psycho-neurology Research-Practice Center. The charity program is broadening as the motto of the project is shared by the RUSSAR foundation. Three years ago, it helped Sidra with her first prosthetics and today they came for the meeting to coordinate the foundations’ aid to other affected children.

The coordinator of the project, Dr. Jihad Khaddad, a Russian medical doctor of Syrian origin, explained the treatment plan for Bashar and Sidra. The children have already received functional prostheses and now await rehabilitation. According to the doctor, the both show great success: Bashar made his first steps on the prostheses while Sidra walks freely after the second prosthetics.

There is a great work ahead of them for adaptation, but Metropolitan Hilarion promised that they would soon be able to walk like ordinary people. He spoke about the feat of the Soviet pilot Meresyev, who, after the amputation of his both legs, returned to the sky and continued flying even with primitive prostheses as they were at that time.

In conclusion of the meeting His Eminence presented the children with gifts as well as new crutches. which will help them during the rehabilitation, and sport shoes. In his interview with the Russia TV channel, which covered the event, Metropolitan Hilarion stressed that the organizers of the charity program consider the children to be their own and are ready to take care of them regardless of their nationality and faith, saying, “We do not make a distinction; all children are children of God”.

The Syrians themselves were also glad to communicate with journalists and shared their impressions, hopes and plans. “Hooligan” Bashar and “Beauty” Sidra, as the Moscow doctors call them, spoke with gratitude about the hospital, treatment and Russia’s beautiful places. But the children still miss their homeland and are ready to come back to go to school and to go to cycle rides again.

Their rehabilitation will last three week, and on July 21 they will go back to Syria.

Before Sidra and Zaour, the charity program brought four children to Russia for treatment at the Children’s Psycho-neurology Research-Practice Center. They all lost limbs as a result of the armed conflicts in the Middle East.

The project “There Is No Foreign Children” was initiated in 2018 by the Department for External Church Relations of the Moscow Patriarchate with a blessing of His Holiness Patriarch Kirill of Moscow and All Russia. Through the efforts of the Poznanie and Life Line charities in Moscow, full-fledged life is restored to children who were sent at the request of the fraternal Orthodox Church of Antioch, as in Syria itself as it is suffering not only from militants’ attacks but also from economic sanctions, there is no possibility for saving these children. In the nearest future, the criteria for selecting patients will be broadened to include children with congenital malformation. In the list there are already dozens of young Syrians, and in September 2019 it is planned to receive in Moscow the ten-year-old Rita Aljudi with an arm congenital malformation.