All In: The Faith of the Centurion 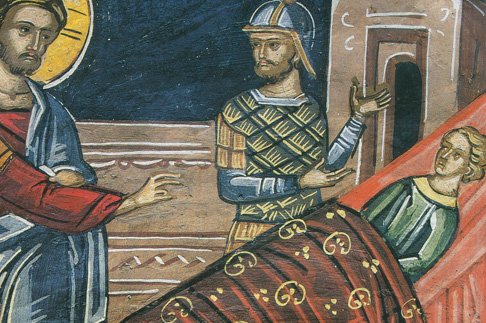 Haven’t you heard people say, “If only I’d lived at the time of Christ!”?

Maybe you’ve said this yourself. One can imagine what a great encounter it would have been, to meet the Lord face to face.

We all imagine we would have been heroes at the great moments in history – that we would have joined the right side, fought courageously against some terrible evil, or even died for some great cause.

By comparison, life today can seem downright boring – or even discouraging.

Those around us seem uninspiring, and uninspired. People are sick in soul and body.

More than that, people are weak.

In that desert, in that weakness, we are desperately looking for the face of Christ.

These uninspired times do not seem at all like times for making great heroes.

These days are very much like the days the Lord Jesus Christ met the Centurion in the Gospel.

The Centurion was posted to a spiritual backwater, a desert – the worst possible job posting in the entire empire. He was nowhere.

Those around the Centurion were obedient – but the servant he cared for the most was sick in body and soul. He was going to die.

In that desert, in his weakness, that Centurion was desperately looking for the face of Christ.

And he found it.

Saint John Chrysostom says, this is the thing that sets the Centurion apart from all those around him – even the Lord’s friends Mary and Martha: the Centurion recognizes the power of God right away, and fully commits to it – right away.

The state – the great Roman Empire – is not going to solve his problems.

The medical system – the doctors of his time – are not going to make his servants problems go away.

Neither is the Centurion divided between two solutions to his problems.

He isn’t keeping the pagan Roman gods in his back pocket, in case Christ fails him.

He isn’t expecting his life’s savings from his army job is going to help.

He is all in, asking Jesus Christ directly for all the help he needs with his number one problem: and he receives it. It is a pattern for our life – if we have as much faith as a pagan centurion.

Saint Irenaeus tells us that God gives us faith to start out with, but it’s preserved through the way we exercise our God-given freedom – what we actually do with our faith, what we do with our lives.

The Lord Jesus Christ tells the Centurion, He has not found so great a faith as his – even in Israel. Even the people who are supposed to know God… don’t know Him!

Nothing changes. Some people respond to God with their whole heart, and some don’t.

In times like these – in the barren desert of history – we are given stark choices about whether to follow Christ, to trust in Christ, to call on Christ for every need, or to fall back onto the useless habits of a world that couldn’t care less about us.

It feels like a desert only when we wrap ourselves up in all the things that are just going to die, and then expect them to bring us back to life!

Like the Centurion’s servant, we will remain locked in our homes, grievously tormented.

It is no wonder why we would seem weak.

The thing which makes the heroes unusual – exceptional – is they recognize that power, and life, and health, and hope only come from Christ, and nowhere else. Everything else is dust.

The Church Fathers tell us, we do live in the time of Christ: ever since His life on earth, and His resurrection from the dead, He has lived in the Church, right here. We only have to recognize Who He Is – just as the Centurion did.

The Lord told us it would be this way, that many would come from the east and west, and would sit down at the table of Abraham, Isaac, and Jacob in the Kingdom of Heaven.

And so our times – our most troubled times, in this spiritual desert – are perhaps the best of times to see clearly this contrast, between the Kingdom of God, and the kingdom of the weak, spiritual desert of this world.