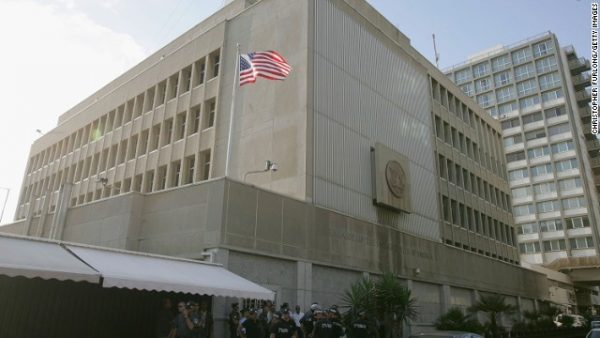 Israel was proclaimed an independent State on 14 May 1948: exactly seventy years later the crazed elite of the USA has recognized its capital as Jerusalem: in one day over 50 people are dead, 2,000 are injured. According to Israel, it is ‘a glorious day’. This does not include those who have already died under illegal Israeli bombardments in Syria. There are those who consider that Israel is a US puppet-State; others consider that the USA is an Israeli puppet-State.

Why has the US elite done this, knowing that Israel has illegally occupied Jerusalem, setting the Muslim world against itself? It can only be because once Israel controls Jerusalem with the support of the world’s only Superpower, it can then at last start building the third Temple so that Antichrist can be enthroned there. His horns are already visible in globalism, both political and electronic, which is only the preparation for his global rule, and in the acceptance of dehumanizing perversions which destroy family life and so increase dependency on Antichrist.

There are those who say that all this is inevitable because the last remaining faithful Christians are few in number. So what? The pagan Roman Empire was brought down by twelve men. The remains of the Christian Empire, Holy Rus, are rising up despite the vicious Soviet culture which tried to suffocate it. It exists in order to counter the rising culture of Antichrist, to be a place of refuge for those who flee the world outside it, all those who still believe in the real Christ.

The responsibility of Holy Rus for the future of mankind is enormous. First the Russian Lands must themselves be fully transfigured, throwing off the old materialistic Soviet culture. Only then can its influence spread elsewhere. Only then can the coming Christian Tsar be chosen. His coming was already prepared by the self-sacrifice of the last Tsar and His Family, Who have been glorified. Only the presence of a new Christian Emperor, representing the Messiah, can stop Antichrist, the false Messiah. The Orthodox task is the opposite of that of the genocidal Israel-USA.

The coming Christian Emperor, the restored Tsar, will continue the work of his spiritual forebears. He will gather all the Orthodox lands and peoples together, opposing the new Sodom and Gomorrah, proposed by those very agents who have built an Embassy in Jerusalem and by the new Euro-order which has thrown out Christ from its money-changers and tells hateful lies about Russia. The coming Christian Emperor and his repented people will be able to counter Antichrist. So he will serve all the peoples of the earth who seek refuge from the demonic rule of him who will sit on his throne in the Temple in Jerusalem, the capital of the New World Order.

On this day of the Sunday Before the Cross, let us celebrate…