An Icon of St. Sergius of Radonezh Gushes Forth Myrrh in Stavropol

Source: Pravmir.ru
Natalya Mihailova | 24 July 2015
July 21, 2015. PRAVMIR. An icon of St. Sergius of Radonezh printed on paper gushed forth myrrh on his feast day at the Church of the Apostles Paul and Peter in the town of Novopavlovsk. 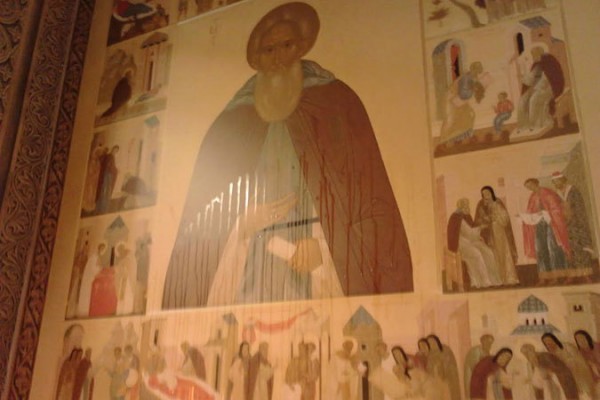 According to the Komsomolskaya Pravda newspaper, thousands of parishioners have come to pray before this icon.

A special committee of the Russian Orthodox Church has travelled to Stavropol to examine the icon, question witnesses, and to draw conclusions.

“It is so far too early to speak about a holy miracle,” said Fr. Vladislav (Tsapko), Rector of the Sts. Paul and Peter Church. “We are waiting for the experts’ conclusion. However, the event testifies to the fact that this is a sacred place, although the church is young, and that the purity of Orthodox traditions is preserved here. Perhaps, this myrrh-streaming is a good sign of the redemption of the parishioners’ sins. Or, perhaps, it foreshadows painful news. No one can ever say.”

Icons stream myrrh in various places in Russia. Thus, in early 2015 an icon of the Crucifixion of Jesus Christ became myrrh-streaming in the Orlov region; the Kazan Icon of the Theotokos “wept” in the Altai Republic; all icons of the Archangel Michael Church in Tula gushed forth myrrh at the same time; and a similar miracle occurred in the middle of an Orthodox exhibition in Ulyanovsk. An icon of Jesus Christ bled in a village church in the Rahachow district in Belarus. Similar events have taken place in the Kabardino-Balkar Republic. Red spots were found on an icon of the First Martyr Stephan.