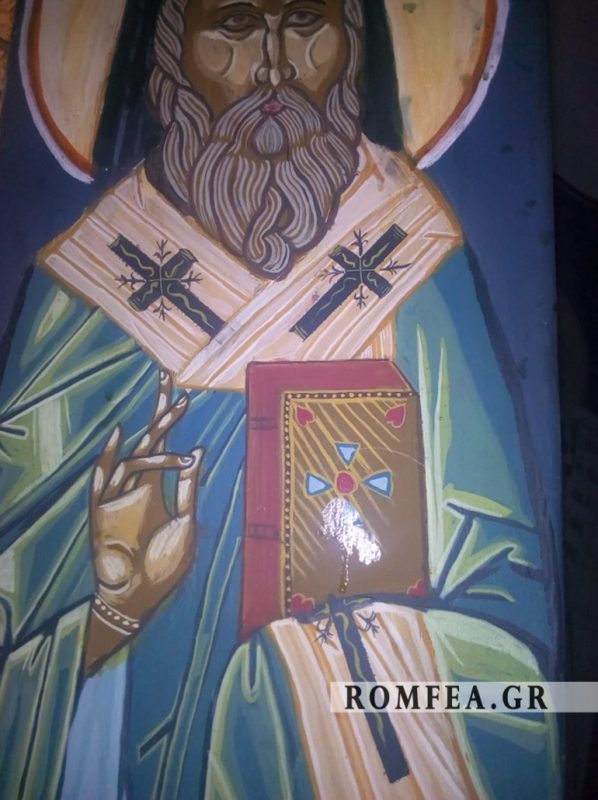 A miracle occurred at the seminary in Nairobi recently, reports His Eminence Archbishop Makarios (Tillyrides) of Nairobi and All Kenya.

On November 9, the feast day of the great St. Nektarios of Aegina, an icon of the saint at the Patriarchal Seminary of Archbishop Makarios III in Nairobi, where they faithfully celebrate the services every morning and evening, began to stream myrrh just before Abp. Makarios departed to serve Liturgy, as he reported to Romfea.

Great Vespers with artoklasia was celebrated in the school’s chapel dedicated to St. Macarius the Egyptian on the eve of the feast, after which Abp. Makarios gave a sermon in which he exalted St. Nektarios as a great example for Orthodox Christians, and assured the students and all those gathered that “Indeed … the saints are always with us, beside us, literally surrounding us and listening to us when we talk to them and ask them for something.”

The Kenyan hierarch’s words would be proven true in a marvelous manner the next morning, when, as Abp. Makarios was preparing to go serve Liturgy in a nearby village, an altar server came and told him, “Something’s happening in the holy church right now that we don’t understand.” Going to the seminary’s chapel, Abp. Makarios found that the icon of St. Nektarios was streaming a fragrant myrrh from two places—from the holy Gospel and from the hand of the saint holding the Gospel.

As His Eminence writes, he crossed himself, venerated the icon, and said aloud, “Lord have mercy!” He then left to serve the Divine Liturgy in the village as scheduled.

Returning to the seminary in the early afternoon, he was informed that the myrrh continued to flow during the Divine Liturgy at the seminary, stopping only once the Liturgy ended.

As Abp. Makarios writes, the miracle was especially touching for the younger African brethren who had never experienced such a thing, which is unthinkable in their culture. They saw that what is said orally to strengthen their faith now had a tangible opening in the direction of holiness, to see the grace of the Holy Spirit literally overwhelm them and overcome logic and the mind by the wisdom, greatness, and power of the saint.

His sanctifying power was now unfolding in them, He descended from the throne of His glory from the heavenly to the earthly, and came and dwelt in them, and with the infinite height of His holiness He manifested to us all, unworthy, His unfailing mercy.