Annunciation of our Most Holy Lady, the Theotokos and Ever-Virgin Mary 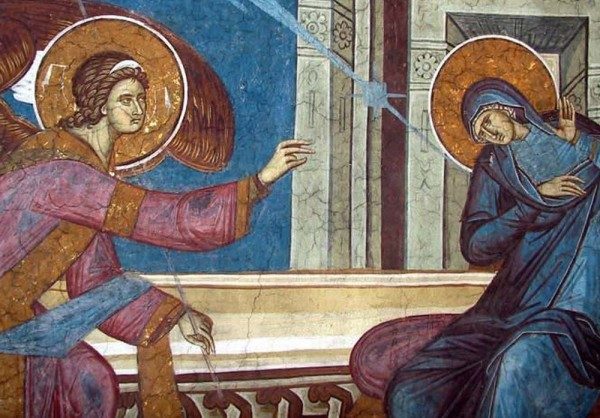 The Greek and Slavonic names for the Feast may be translated as “good tidings.” This, of course, refers to the Incarnation of the Son of God and the salvation He brings. The background of the Annunciation is found in the Gospel of Saint Luke (1:26-38). The troparion describes this as the “beginning of our salvation, and the revelation of the eternal mystery,” for on this day the Son of God became the Son of Man.

There are two main components to the Annunciation: the message itself, and the response of the Virgin. The message fulfills God’s promise to send a Redeemer (Genesis 3:15): “I will put enmity between you and the woman, between your seed and her seed; he shall crush your head, and you shall lie in wait for his heel.” The Fathers of the Church understand “her seed” to refer to Christ. The prophets hinted at His coming, which they saw dimly, but the Archangel Gabriel now proclaims that the promise is about to be fulfilled.

We see this echoed in the Liturgy of Saint Basil, as well: “When man disobeyed Thee, the only true God who had created him, and was deceived by the guile of the serpent, becoming subject to death by his own transgressions, Thou, O God, in Thy righteous judgment, didst send him forth from Paradise into this world, returning him to the earth from which he was taken, yet providing for him the salvation of regeneration in Thy Christ Himself.”

The Archangel Gabriel was sent by God to Nazareth in Galilee. There he spoke to the undefiled Virgin who was betrothed to Saint Joseph: “Hail, thou who art highly favoured, the Lord is with thee: blessed art thou among women. And, behold, thou shalt conceive in thy womb, and bring forth a son, and shalt call his name Jesus. He shall be great, and shall be called the Son of the Most High: and the Lord God shall give unto him the throne of his father David: And he shall reign over the house of Jacob for ever; and of his kingdom there shall be no end.”

In contrast to Eve, who was readily deceived by the serpent, the Virgin did not immediately accept the Angel’s message. In her humility, she did not think she was deserving of such words, but was actually troubled by them. The fact that she asked for an explanation reveals her sobriety and prudence. She did not disbelieve the words of the angel, but could not understand how they would be fulfilled, for they spoke of something which was beyond nature.

“And the angel answered and said unto her, ‘The Holy Ghost shall come upon thee, and the power of the Most High shall overshadow thee: therefore also that which shall be born of thee shall be called the Son of God. And, behold, thy cousin Elisabeth hath also conceived a son in her old age: and this is the sixth month with her, who was called barren. For with God nothing shall be impossible.’ And Mary said, ‘Behold the handmaid of the Lord; be it unto me according to thy word.’ And the angel departed from her.” (Luke 1: 35-38)

In his Sermon 23 on the day of the Annunciation, Saint Philaret of Moscow boldly stated that “the word of the creature brought the Creator down into the world.” He explains that salvation is not merely an act of God’s will, but also involves the Virgin’s free will. She could have refused, but she accepted God’s will and chose to cooperate without complaint or further questions.

The icon of the Feast shows the Archangel with a staff in his left hand, indicating 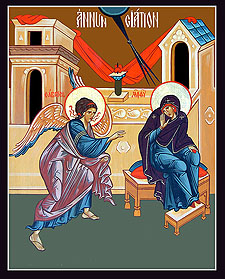 his role as a messenger. Sometimes one wing is upraised, as if to show his swift descent from heaven. His right hand is stretched toward the holy Virgin as he delivers his message.

The Virgin is depicted either standing or sitting, usually holding yarn in her left hand. Sometimes she is shown holding a scroll. Her right hand may be raised to indicate her surprise at the message she is hearing. Her head is bowed, showing her consent and obedience. The descent of the Holy Spirit upon her is depicted by a ray of light issuing from a small sphere at the top of the icon, which symbolizes heaven. In a famous icon from Sinai, a white dove is shown in the ray of light.

There are several famous icons of the Annunciation. One is in the Moscow Kremlin in the church of the Annunciation. This icon appeared in connection with the rescue of a prisoner by the Mother of God during the reign of Ivan the Terrible. Another is to be found in the Dormition Cathedral in Moscow (July 8). It was originally located in Ustiug, and was the icon before which Saint Procopius the fool (July 8) prayed to save the city from destruction in 1290. One of the most highly revered icons in Greece is the Tinos icon of the Annunciation (January 30).

The Annunciation falls during Lent, but it is always celebrated with great joy. The Liturgy of Saint Basil or Saint John Chrysostom is served, even on the weekdays of Lent. It is one of the two days of Great Lent on which the fast is relaxed and fish is permitted (Palm Sunday is the other).

Advent a Time of Spiritual House…

According to the Russian Orthodox Church calendar, the period from the 28th…

Most viewed articles
Priest Criticizes the Idea that Coronavirus Vaccine Is the Seal of the Antichrist190
Do You Worship God or Yourself?171
Advent a Time of Spiritual House Cleaning130
Seraphim Mosaic Revealed with Removal of Scaffolding in Hagia Sophia123
Worldwide government restrictions on religious freedoms highest in more than a decade103
Give Thanks At All Times101
Metropolitan Anthony: Happy People Will Change the World91
Russian Church Launches “Bus of Mercy” Campaign to Help the Homeless in Ufa32
How We Worship: the Struggle of the American Experience1
“Prepare o Bethlehem!”1
Most popular authors
Pravmir.com team539
Metropolitan Antonius171
Fr. John Parker130
Priest Luke A. Veronis101
Fr. Gabriel Bilas1
Archpriest Michael Gillis1