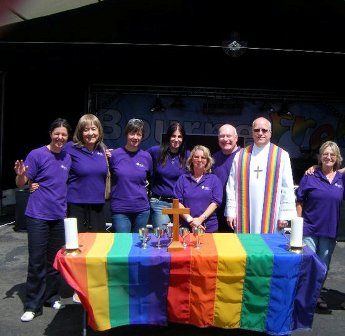 Not long ago the question about whether or not Orthodox Churches could accept homosexuality as a valid lifestyle came to the fore.  The year was 1983.  A denomination by the name of the “Universal Fellowship of Metropolitan Community Churches” applied for membership in the association of mainline Protestant churches, the National Council of Churches.  The raison d’être of the Metropolitan Community church was the acceptance of homosexual lifestyle.  It was and saw itself as, “the gay church”.  This was acknowledged at the time by G. William Sheek, the Director of the National Council’s unit on Family Ministries and Human Sexuality, who wrote that accepting the Metropolitan Community Churches into membership would contribute to the “high visibility” which had been tending to legitimize homosexuality.

Many in the National Council of Churches wanted them in.  But the Orthodox balked, and in fact drew a line in the sand:  if they were in, the Orthodox were out.  In a statement drafted by the Greek Fr. Stanley Harakas with help from the Antiochian Fr. Joseph Allen, and with supplementary comments by the Orthodox Church in America’s Fr. Thomas Hopko (of blessed memory), the Orthodox were clear that accepting the Metropolitan Community Churches into membership would not contribute to inter-denominational Christian unity (the supposed reason for the National Council’s existence), but represent “a further dilution” of the ecumenical work.  In a prepared statement, the paper drafted by Frs. Stanley and Joseph said,

“A body whose raison d’etre is not the faith of the Scriptures and the Creeds, but a passion universally condemned in the age-long tradition of the Church as inappropriate and unfitting to the calling of the Christian life, cannot in fact be seen as a Christian communion by the Orthodox.”

In other words, the Orthodox Church could not maintain an ecumenical relationship with a body which blessed homosexual practice.  The Metropolitan Community Churches were characterized as a group which was (to quote the Orthodox statement again) “specifically organized around a moral failure, and which finds support in a thoroughly rewritten exegesis of the apostolic, patristic, canonically embodied mind of the Church”.   The acceptance of the Metropolitan Community Churches into membership of the NCC therefore would make Orthodox membership in that body impossible.

The debate over the motion whether or not to accept the Metropolitan Community Churches into membership was a long and agonized one, lasting almost two hours.  At last, by vote of 116 to 94, the board agreed to “postpone indefinitely” the decision on whether or not to accept them for membership.  Documents, including the Orthodox statement and Fr. Hopko’s even more radical stance, can be found here.

This is not ancient history, representing the benighted first century or the medieval times before Science enlightened us all.  This was 1983.  The irony of the whole thing of course (as Archpriest John Morris pointed out in his book The Historic Church) is that this was “a meaningless victory”, because since that time many Protestant churches have come out in favour of homosexual practice anyway.  (The irony was doubtless not lost on the Metropolitan Community Churches.)

What has changed in the few years since 1983?  Just this:  the cultural tide is now flowing in favour of those promoting the legitimacy of homosexual practice in a way that it wasn’t just three short decades ago.  Do the Metropolitan Community Churches proclaim “another Jesus”?   In 1983 we thought so, and said so clearly and emphatically.  The question now is whether or not we will retain the courage to say so when the majority of secular society is ready to shout us down for saying it.

Most viewed articles
Good News from His Eminence Metropolitan Joseph159
Courage,  Anyone?110
The Emigration of Abraham79
Moleben for Peace in the Holy Land to Be Held Tomorrow in Moscow72
By Love and Loyalty to God Women Build Up the Church68
Go and Proclaim the Good News48
Metropolitan Onuphry Gives Advice on How to Make Important Decisions32
Metropolitan Hilarion: “Human Life Must Be Protected Even at the Embryo Stage”27
Most popular authors
Archbishop Joseph of New York and Metropolitan of All North America159
Pravmir.com team134
Archpriest Geoffrey Korz110
Archpriest Lawrence Farley79
Metropolitan Hilarion (Alfeyev)67
Priest Luke A. Veronis49
Maria Trushanina1