Apostles Peter and Paul, Pillars of the Faith 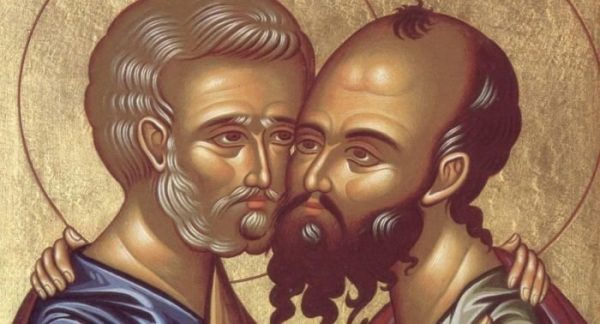 In AD 258, the Christian Church established a feast honoring Saints Peter and Paul as the two leading saints of apostolic times. In recognition of their tremendous contributions in the spreading of the Gospel and in the growth of the early Church, the Church named them Chief and first among the Apostles, and celebrated their feastday on June 29th/ July 12th.

Peter and Paul became Apostles in different ways. Peter was chosen by Christ and was with Him throughout His earthly ministry. Paul, who was a Pharisee and an outright persecutor of Christians, converted to Christianity by revelation on the road to Damascus. This happened in the early days of the Church shortly after Saint Stephen was stoned to death, to which Paul approved and was a witness.

Both apostles were filled with the power of the Holy Spirit: Peter, at Pentecost, when the Holy Spirit descended upon the Apostles in the form of fiery tongues, and Paul, by the laying on of hands by those already recognized as possessing the Holy Spirit.

When St. Peter preached on the day of Pentecost, 3,000 people  became Christians through baptism. Peter then continued his missionary activities in Asia Minor, Palestine, Italy and Illyria. A pillar of the Faith, he healed the sick and even raised the dead.

Paul preached everywhere he went, founded numerous Christian communities, performed miracles and suffered greatly for the Faith. While not one of the Twelve Apostles, Paul, became the greatest of the Apostles in zeal and sacrifice for the Gospel. Paul became the most outstanding missionary for Christianity.

Interestingly, the two giants of the early Church were unlike one another in many ways. Peter was a fisherman, Paul was a scholar. Peter was married, while Paul was single. Peter was a simple, impulsive person. Paul was a thinker, a philosopher of great erudition.

Yet they had one thing in common: they were one in their love and devotion to Jesus Christ in their missionary zeal to propagate the Christian faith. And both died for their faith – Peter being crucified head downward and Paul beheaded on June 29th, in the year AD 67 during the persecution of the Roman Emperor Nero.

“I have been crucified with Christ, and it is no longer I who live, but Christ who lives within me.” Galatians 2:20

“Rejoice in the Lord always; again I say  rejoice” Philippians4:4

“Do not be anxious about anything, but in everything by prayer and supplication, with thanksgiving, let your requests be made known to God. And the peace of God, which surpasses all understanding, will guard your hearts and minds through Christ Jesus.” Philippians 4:6-7

“I consider that our present sufferings are not worth comparing with the glory that will be revealed to us.” Romans 8:18

“Love is patient and kind. It does not envy, it does not boast, it is not proud. It is not self-seeking, it is not easily angered, it keeps no record of wrongs… Love never fails… These three things remain: Faith, Hope and Love. The greatest of these is love.”
1 Corinthians 13:4-8,12

“I have learned in whatever state I am, to be content… For I can do all things through Christ who strengthens me.” Phil 4:11,13

“We do not live to ourselves and we do not die to ourselves. If we life we live to the Lord, and if we die we die to the lord; so then, whether we live or whether we die, we are the Lord’s.” Romans 14:7-9

Jesus asked, “But who do you say that I am?” And Simon Peter answered, “You are the Messiah, the Son of the living God.” Jesus replied, “Blessed are you Simon, for this was not revealed to you by flesh and blood, but by my Father in heaven. And I tell you that you are Peter, and on this rock I will build my church, and the gates of hell will not overcome it, and I will give you the keys of the kingdom of heaven.” Mt 16:16-19

“Always be ready to give a defense to everyone who asks you a reason for the hope that is in you, with gentleness and reverence.” 1 Peter 3:15

Just as He who called you is holy, you also be holy in all your conduct. 1 Peter 1:15

You are a chosen generation, a royal priesthood, a holy nation, His own special people, that you may proclaim the praises of Him who called you out of darkness into His marvelous light; who once were not a people but are now the people of God, who had not obtained mercy but now have obtained mercy. 1 Peter 2:9-10