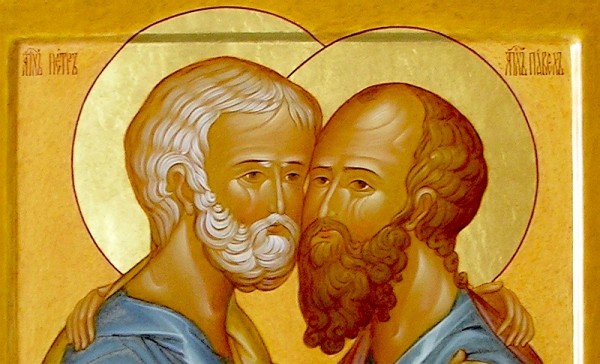 As is well known, the classic icon for this blessed feast portrays the two holy apostles embracing and kissing each other. This apostolic kiss is has been explained by many people in various ways. For some, this kiss means the reconciliation of the two apostles after they had disagreed in Antioch. For others, this kiss represents the meeting of the East (represented by the Apostle Paul) and the West (represented by the Apostle Peter). Yet others see in it a symbol of the fate shared by the two apostles who were martyred in Rome, the first by beheading and the second by being crucified like his Teacher.

However much these theories vary in precision, some of them—especially the last—offer a sound and constructive solution. In any case, it is clear that the two apostles represent two distinct worlds, or to put it better, they present to us two very important biblical personalities. Each enjoyed particular virtues with which they especially shined.

Starting with the Apostle Paul, we easily notice through the texts of the New Testament that the Apostle Paul was distinguished by three characteristics that fundamentally helped him in the success of his mission and labors.

1. He was a Roman citizen. This meant that he possessed unique civil and political rights. He repeatedly took advantage of them whenever the need arose for this. For example, we can point to the incident of his being freed from the jail in Philippi once he announced that he was a Roman citizen.

2. The Apostle Paul was adept in Greek language and philosophy. For this reason God saw him as “a chosen vessel” and sent him to the gentiles. By means of the Greek language, the Apostle Paul was able to capture the great and civilized Greek world of that time for Christ. He put into the service of God’s Word the power of philosophy and linguistic knowledge as a means for dialogue, encounter, and communication. Here we may contemplate the role of knowledge and philosophy.

3. The Apostle Paul possessed a third characteristic, his Jewish, Hebrew religion. He was one of the Jews of the diaspora. He himself took pride in being a Pharisee who had studied with Gamaliel.

Here we turn to the question of religion.

On the other hand, we notice a trio of virtues with the Apostle Peter.

1. Jesus named Peter as a shepherd. When Peter responded in the affirmative to Jesus’ question, “Do you love me?,” Jesus sent him to tend the sheep. So love is pastoral service. Here we may pause at the question of “shepherding.”

2. Peter confessed to the most important truth. The most important and defining event in the life of Saint Peter was his startling confession, “You are the Christ, the Son of the Living God.” This is the truth that the Lord considered to be the rock upon which His Church would be built.

3. Peter was distinguished by zeal in love. We easily notice in the texts of the New Testament that Peter always wanted to demonstrate his zeal for the love of Christ more than the other apostles. This zeal caused him to promise Jesus that he would follow Him even to death, to cut off the ear of the high priest’s slave, to immediately cast himself into the Sea of Tiberias in order to meet Jesus first when He had risen from the dead. So the Apostle Peter was distinguished by righteous zeal.

Indeed, these two trios complement each other when we combine each of them. Yes, authority must be pastoral, philosophy true, and religion burning zeal.

It is true that the true meaning of authority is to shepherd people. “Whoever desires to become great among you shall be your servant. And whoever of you desires to be first shall be slave of all” (Mark 10:43-44).

Indeed, true philosophy is Christian truth, just as true knowledge is found in the Christian faith.

Indeed, “the way” is shepherding in authority, “The truth” in philosophy, and “the life” in religion. This is what is symbolized in the image of the embrace of Peter and Paul. That is, authority with Paul embraces shepherding with Peter. The sciences with Paul meet the truth with Peter. Finally, religion with Paul is realized in zealous love with Peter.

The embrace of Peter’s virtues and Paul’s virtues, when these two worlds are intertwined and the characteristics of each saint meet, Jesus’ rock is realized in practice: 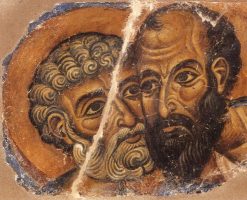 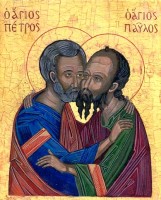 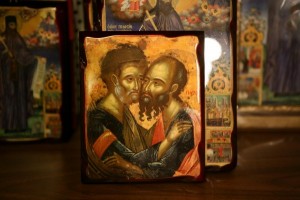 There Is Hope for Us All:…
Priest Philip LeMasters

In order to celebrate worthily the feast day of Sts. Peter and Paul, we must go…

Most viewed articles
The Trap of Religiosity113
Patriarch Daniel explains why the Hesychasts were the most sought-after spiritual fathers and what is a prayerful reason103
Bishop Nicholas of Manhattan visits Holy Cross Monastery in West Virginia84
Lord, Save Me!75
Why Everything Is Important (but not the stuff you might imagine)69
25 Years of Help: the Ship-Church Goes On its 25th Voyage to Distant Villages46
Condolences of Patriarch Kirill over the death of believers in the fire that broke out in Abu-Seifein Church in Cairo45
St. Tikhon Church to host Liturgical Music Symposium in October 202241
Ukrainian Church Celebrates Metropolitan Onuphry’s 8th Anniversary of His Enthronement21
Most popular authors
Pravmir.com team237
Vasileios Stoyiannos113
Aurelian Iftimiu103
Fr. Theodore Stylianopoulos75
Archpriest Stephen Freeman69