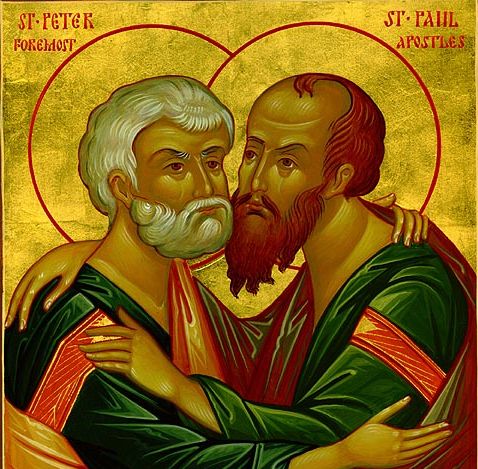 The son of Jonah and brother Andrew the First-Called, of the tribe of Simeon and the town of Bethsaida, he was a fisherman and was at first called Simon, but the Lord was pleased to call him Cephas, or Peter (St. John 1:42). He was the first of the Disciples to give clear expression of his faith in the Lord Jesus, saying: “Thou art the Christ, the Son of the Living God” (St. Matthew 16:16). His love for the Lord was very strong, and his faith in Him went from strength to strength. When the Lord was put on trial, Peter denied Him three times, but it needed only look into the face of the Lord, and Peter’s soul was filled with shame and repentance. After the Descent of the Holy Spirit, Peter became a fearless and powerful preacher of the Gospel.  After his first sermon in Jerusalem, about 3,000 souls were converted to the Faith.  He preached the Gospel throughout Palestine and Asia Minor, in Italy and the Illyria.  He performed many wonders (miracles), healing the sick and raising the dead, and even his shadow had the power of healing the sick. He had a major struggle with Simon the Magician, who declared himself to be from God but was actually a servant of the devil. He finally put him to shame and overcame him. Peter was condemned to death on the order of the pagan and wicked Emperor Nero, a friend of Simon’s. After installing Linus as Bishop of Rome and exhorting and encouraging the flock of Christ there, Saint Peter went to his death with joy. When he saw the cross before him, he asked the executioner to crucify him upside-down, because he felt himself to be unworthy to die in the same way as his Lord. And so this great servant of the Greatest Master went to his rest and received a crown of eternal glory.

Born in Tarsus and of the tribe of Benjamin, he was formerly called Saul and studied under Gamaliel. He was a Pharisee and a persecutor of Christians. He was wondrously converted to the Christian faith by the Lord Himself, who appeared to him on the road to Damascus. He was baptized by the Apostle Ananias, named Paul and enrolled in the work of the Great Apostles. He preached the Gospel everywhere with burning zeal, from the borders of Arabia to the land of Spain, among both the Jews and the heathen, and receiving the title of ‘the Apostle to the Gentiles’. His fearful sufferings were matched only by his superhuman endurance. Through all the years of his preaching, he hung from day to day like a thread between life and death. Filling his days and nights with toil and suffering for Christ, organizing the Church in many places and reaching a high level of perfection, he was able to say: “I live; yet not I but Christ liveth in me” (Galatians 2:20). He was beheaded in Rome in the reign of the pagan cruel emperor Nero, at the same time as Saint Peter.

On the Fear of God

These words of the holy Apostle Peter have a double basis: heavenly inspiration and personal experience. Through heavenly inspiration, the simple fisherman became a teacher of the people, a pillar of the Faith and a mighty miracle worker. Through personal experience, Saint Peter acknowledged that all his strength and wisdom were from God, and, because of that, he knew the need to have the fear of God in himself. No other fear except the fear of God.

A madman takes fright when the lightning merely flashes and the thunder cracks, but a wise man stands in the fear of God every day and every hour. The Creator of the thunder and lightning is more awesome than either, and He does not just appear before you from time to time as do thunder and lightning but is with you unceasingly and never separates Himself from you. Therefore it is not enough to feel the fear of God only from time to time, but we must breathe it in with every breath. The fear of God is the fresh ozone in the suffocating air of our souls. This ozone brings purification and lightness, and a sweet fragrance and health. Until he had become established in the fear of God, St. Peter was merely Peter and not an Apostle, a hero, a teacher of the people and a worker of miracles (wonders).

Oh, my brethren, let us not make merry before the time of harvest. This life of ours is not the harvest but the time of sowing, in toil, sweat, and fear. The farmer lives in trepidation until he has gathered the crop from his field. Let us also leave our merrymaking until the day of harvest, for now, is the season of toil and fear. Shall I be saved? That question should torment each of us, just as the question: ‘Shall I reap the fruit of my labor from the field?’, torments the farmer. The farmer labors and waits in trepidation every day. Let us also labor and wait in fear for the whole season of our sojourn here on this earth.

O Lord Who art fearful and mighty upholds us in Thy fear. To Thee be glory and praise forever. Amen. (The Prologue from Ochrid)