Source: Pemptousia
Kristin (Xrisanthi) Giannas | 10 November 2018
The floors have just been shined, and the little white church dedicated to Archangel Michael in Tarpon Springs is about to get a new front door. 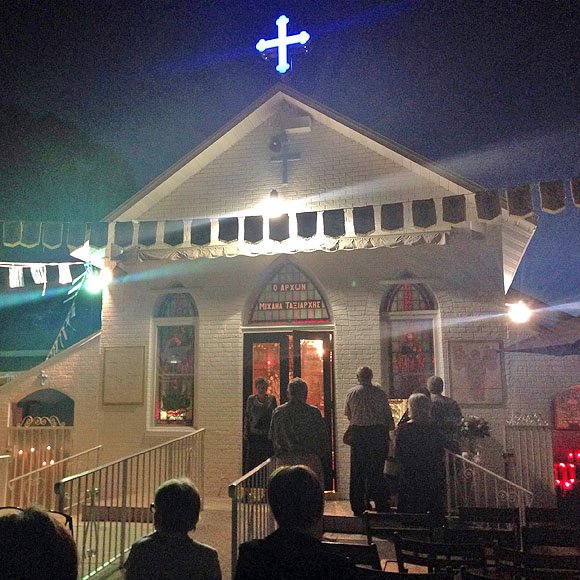 As preparations are being made for hundreds of visitors, Stavroula Pololos of Montreal is sitting in one of the pews, flipping through a scrapbook of newspaper clippings and handwritten accounts detailing miracles that have happened here. “My prayer is that I don’t want to get sick again, I pray that he heals me and I don’t get sick again,” she said, looking up at the icon of Archangel Michael. Pololos first learned of the shrine in September, after completing 18 rounds of chemotherapy to treat ovarian cancer that came back for the second time.

According to the Orthodox Christian faith, Archangel Michael is the highest ranking angel, believed to defend mankind from danger, and is commemorated every year on November 8 (November 21). The shrine is evidence of that faith, built after Goldie Parr’s (then) 11-year-old brother Steve Tsalickis, was cured of a terminal brain tumor in 1939.

“He asked to hold a small icon of Archangel Michael that my mother had gotten from her island of Symi,” she said, adding that her brother was confined to a hospital bed, and given two weeks to live by a team of doctors at St. Josephs Hospital in Tampa.

“As soon as she gave it to him, he put the icon on his chest and he started mumbling, and my mother thought that would be the end- but Archangel Michael came to him and brought him to where it’s built right now- we had an empty lot to build a house, and he said, ‘Steve, I will make you well if you promise to build a shrine for me here,’” she said.

Steve was cured of his tumor, and Parr’s family was obedient to the 11-year-old’s vision, building the shrine to house the small icon of Archangel Michael. According to Parr, Abbot Chrysanthos Maroulakis gave her mother the icon during a visit to The Panormitis in 1937, a centuries-old monastery located off the coast of Greece, built by the Symian people in honor of their island’s protector, Archangel Michael. A Visit to The Panormitis: Symi, Greece
“Here we become witnesses of the living faith of the people,” said Georgios Petropoulos, theologian and author of the book, History and Miracles of the Panormitis. Petropoulos says 8,000 pilgrims from all over Greece will come to celebrate the feast day of Archangel Michael this weekend. “You see people that come on their knees from the ship all the way to the icon inside, in order to offer their prayers and their supplications to the Archangel; to either ask for a request, a favor, or to offer thanks for that which has already been given to them,” he said.

The 17th century church, located in the center of the monastery’s courtyard, is filled with “tamata” or offerings of oil lanterns and gold, much of which has been pinned in front of a 2-meter high silver-leafed icon of the Panormiti. The Icon of Archangel Michael from Panormitis Monastery in Symi, Greece

“I think it takes something to knock you over, to shock you to sort of start believing,” said Manuel Lykopandis of Australia, who credits the Panormiti for his decision to become a Greek Orthodox priest. Lykopandis says about twenty years ago, when he was doubting the existence of God, he wrote a letter to the Panormiti, placed it in a glass bottle along with a donation, and threw it into Apollo Bay in southwestern Victoria.

“I forgot about it, to be quite honest,” said Lykopandis, who went on to say that two years later, he received a receipt on monastery letterhead, thanking him for the donation that washed ashore.

“From that making it’s way to the Panormiti was the biggest miracle for me, where my faith just grew, and I started to believe there was something eternal,” he said. What Lykopandis experienced is a recurring miracle unique to this monastery, according to Petropoulos.

“There are people nowadays as well as in the past, who couldn’t come here for some reason, so they would send through the waves of the sea a small bottle with a note or a letter in which they would write the problem that either they themselves were having or that of their loved ones, and many times there is money inside these bottles, even jewelry, which they would send with this uncertain way to the Archangel,” he said. Dozens of these bottles from all over the world are now on display inside a museum at the monastery. Bottles: Offerings made to Panormitis Monastery by Sea

The Perceived Will of Archangel Michael
The exact date of the founding of the monastery is unknown, but frescoes inside the church and the silver plating on the icon of the Panormiti date back to the 1700s. Petropoulos points to tradition that tells of a pious woman named Maria, who found a small icon of Archangel Michael on land she owned near the monastery.

After bringing the icon into her home in Symi, it miraculously returned back to the exact same place where it was discovered, according to Petropoulos. “The woman along with the clergy and the people of the island perceived the will of the Archangel and they built the first small church where they placed the icon of Archangel Michael,” he said.

Watching the Passing of Miracles
The shrine in Tarpon Springs is located on Hope Street, and many believe it too was the will of Archangel Michael, revealed through an 11-year-old boy. Steve Tsalickis would become a high school guidance counselor and business owner before passing away in 2007 at the age of 78. “I’m glad that I’m here to take care of it, and maybe God will give me a couple more years,” said Parr, who spends most of her time greeting visitors and responding to letters from all over the United States. Parr has been around long enough to know that not every prayer is answered, but she says, that’s part of the mystery. “A lot of people come, and they kneel and they pray, and you see them crying… I think that’s wonderful – there’s still faith, there’s still hope,” she said.

Pololos says her faith is her medicine, and a gift she hopes Archangel Michael will continue blessing. “I feel when I pray, I feel God’s always with me- all hardships with the cancer, it’s my faith that’s made me strong,” she said.