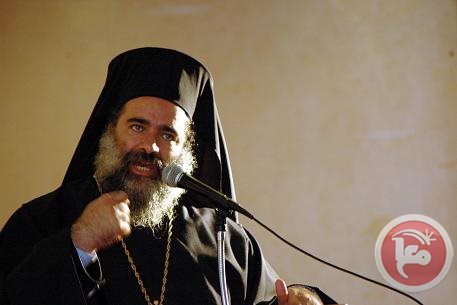 “It is the right of every Christian to reach the Church of the Holy Sepulchre without facing any obstacles, or impediments,” Hanna said in a statement.

“The Israeli security pretexts are unacceptable in every way,” he added, calling on Orthodox and Christian institutions to facilitate the entrance of Christians to the holy sites.

“We call on our sons, churches and followers to head to the Church of the Holy Sepulchre and hold on to this religious and national right and refuse the status quo imposed by the occupation authorities,” the archbishop said.

Hanna’s statements come days after Palestinian Christian groups in Jerusalem denounced Israeli restrictions on their right to worship in the city, calling for an end to discrimination against both Christians and Muslims in the holy city.

“The restrictive measures constitute grave violation on the freedom of worship, and amount to discrimination against Christians because the occupation authorities want to negate Christian presence and create the impression of a Jewish-only city,” the statement signed “Palestinian Christian Organizations in Occupied East Jerusalem” read.

Both Christians and Muslims are often “unable to worship freely and to be with their families and friends” during religious holidays because of Israel’s actions, the statement added.

Jerusalem was the scene of violence last Easter, as Israeli forces erected checkpoints around the Holy City and assaulted pilgrims as they crowded in the area.

A statement signed by signed by the heads of all recognized churches in the Holy Land later denounced the “awful scenes of the brutal treatment to clerics, average people and pilgrims in Jerusalem during Holy Saturday,” lamenting that clergymen and average people “get beaten brutally and indiscriminately and be denied access to their churches under the pretext of keeping order.”

Israel later officially apologized to Egypt after Israeli police officers attacked Egyptian diplomats and a Coptic clergyman at a church in Jerusalem during Orthodox Easter.

In a report published in 2012, the US State Department made similar observations.

“Strict closures and curfews imposed by the Israeli government negatively affected residents’ ability to practice their religion at holy sites, including the Church of the Holy Sepulchre and Al-Aqsa Mosque in Jerusalem, as well as the Church of the Nativity in Bethlehem,” the report said.

“The separation barrier significantly impeded Bethlehem-area Christians from reaching the Church of the Holy Sepulchre in Jerusalem and made visits to Christian sites in Bethany (al-Eizariya) and Bethlehem difficult for Palestinian Christians who live on the Jerusalem side of the barrier.”

East Jerusalem, including the historic Old City, was occupied by Israeli forces in 1967 and later annexed in a move not recognized by the international community.

There are around 200,000 Palestinian Christians in the West Bank, Gaza Strip, and inside Israel in total, while hundreds of thousands more live abroad.