Archbishop Demetrios highlights the contributions and role of IOCC in Middle East Conference, in Athens

Source: Greek Orthodox Archdiocese of America
Natalya Mihailova | 22 October 2015
NEW YORK – His Eminence Archbishop Demetrios of America participated in the proceedings of the international conference titled Religious and Cultural Pluralism and Peaceful Coexistence in the Middle East, organized by the Ministry of Foreign Affairs of Greece, October 18-20, 2015, in Athens. 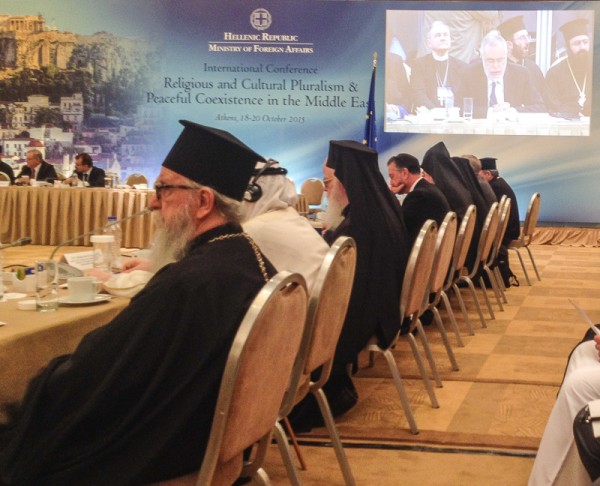 In his address, Archbishop Demetrios, emphasized the aspect of humanitarian aid in response to the crisis that flared up in the Middle East and spreads in Europe and around the world. He highlighted the contribution and role of IOCC (International Orthodox Christian Charities), which is the official humanitarian agency of the Assembly Canonical Orthodox Bishops in the United States.

His Eminence said the initiative of the Greek Government and the Ministry of Foreign Affairs in organizing the international conference was very important and an opportunity for understanding and conciliation in a terribly difficult landscape. 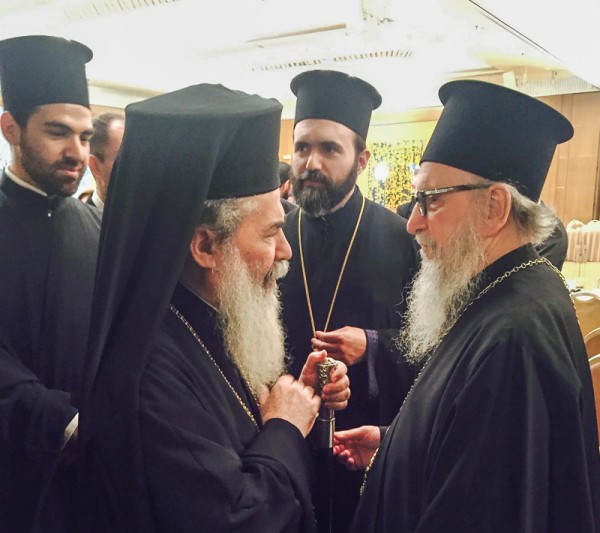 Archbishop Demetrios of America converses with Patriarch Theofilos of Jerusalem

He noted that the presence and participation of the Primates of the Orthodox Churches led by Ecumenical Patriarch Bartholomew and the participation of other leaders and key personalities from the Middle East region indicates the degree of urgency for action and gives us hope for immediate and effective response.

“The Christian element is diminishing in the area and this is a disturbing development,” Archbishop Demetrios said in another statement and, noting the drastic reduction of the Orthodox population in the Middle East in recent years, emphasized the need for measures to prevent and avert the long-term consequences of conflict and demographic and cultural changes in the region.