At the largest ever conference on the Middle East, Metropolitan Hilarion calls to defend Christians

Source: DECR
Natalya Mihailova | 20 October 2015
The largest ever conference to be held on the situation of Christians and other religious minorities in the Middle East took place on October 19-20, 2015, in Athens, under the theme ‘Religious and Cultural Pluralism and Peaceful Co-existence in the Middle East’. 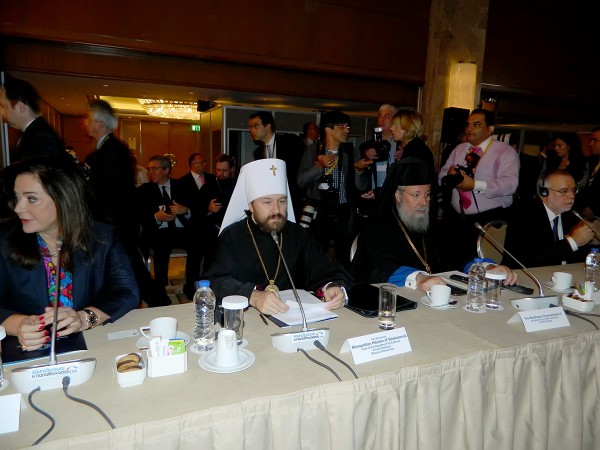 It was organized by the Hellenic Republic Ministry of Foreign Affairs. It brought together delegates from 50 countries, including Primates of Local Orthodox Churches, representatives of the Roman Catholic Church and Protestant communities, Muslim leaders, governmental officials, and representatives of international organizations and the academic community.

Among the participants were His Holiness Patriarch Bartholomew of Constantinople, their Beatitudes Patriarchs Theodoros of Alexandria and All Africa, John of Antioch and All the East, Theophilos of Jerusalem and All Palestine, and their Beatitudes Archbishops Chrysostom of New Justiniana and All Cyprus, Jeronymos of Athens and All Greece, and Anastasios of Tirana and All Albania.

The Russian Orthodox Church was represented by Metropolitan Hilarion of Volokolamsk, head of the Moscow Patriarchate department for external church relations (DECR).

On October 19, the opening speeches were made by the President of the Hellenic Republic Prokopios Pavlopoulos and Minister of Foreign Affairs Nikolaos Kotzias. Speeches were also made by high-ranking religious and political leaders.

Metropolitan Hilarion devoted his presentation to the disastrous state of Christians in the Middle East. His Eminence gave concrete examples of the elimination or considerable reduction of the Christian presence in several countries as a result of extremists’ actions. He reminded the assembly that the loss of the Christian presence in the Middle East will have irrevocable consequences. In conclusion of his presentation, Metropolitan Hilarion stressed, ‘We hope that the world can draw a lesson from the most wide-scale humanitarian tragedy of recent years. We call upon politicians, who bear responsibility for what is happening, to make all efforts to defend Christians and guarantee the return to their homes and to the lands of which they are native inhabitants’.

Key reports were made on various aspects of problems involved in the situation of believers in the Middle East and North Africa.

On October 20, the closing session and the final press conference were led by the head of the Greek foreign policy department, Mr. N. Kotzias.

The work of the conference was summed up in a declaration in which the participants in the conference expressed serious concern for the unprecedented humanitarian crisis in the Middle East, denounced the human rights violations and the acts of terrorism and extremism against religious communities, especially in Syria and Iraq. The document states the need to make urgent efforts for protecting the religious rights of Christians and the rights of believers to live in their native land in which these communities have already existed for thousands of years. The declaration states, ‘The deliberate destruction and looting of religious and cultural heritage assets such as churches, religious shrines and sites, monuments and museums in the region is strongly condemned’.

During his trip to Greece, the DECR chairman was accompanied by the Rev. Dimitry Safonov, head of the DECR section for interreligious contacts, and the Rev. Anatoly Churyakov, an interpreter.