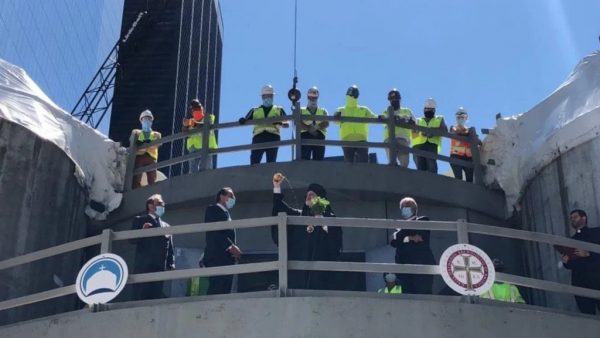 The church, destroyed during the collapsing Twin Towers on 9/11, had been stalled due to financial problems as an on-again, off-again construction project for nearly 20 years. Finally, underway again, Archbishop Elpidophoros of America blessed the restart of construction works which are slated to be completed in time for the 20th anniversary of the 9/11 Twin Tower bombings.

“It’s a resurrection of the lives, of the souls, of the people lost on Ground Zero,” Archbishop Makarios said of the project.

He blessed the construction workers and officialsd before the installation of the new skylight in the dome of the church, stating that the natural light opening is important as a symbol of “hope for the future, a sign that we have overcome already all difficulties and challenges.”

The new design is inspired by the Hagia Sophia in Istanbul, will soon be open for the public to visit across from the 9/11 Memorial Plaza. The project became mired in financial difficulties but got back on track after fundraising by a nonprofit group which includes the membership of billionaire grocery chain owner John Catsimatidis. The group managed to raise $45 million in less than three months so that the work could resume on 3 August.

The church, named after the patron saint of sailors was first constructed in 1916 and began services in 1922. Established in a modest building on Cedar Street, it was an important point of gathering for Greek migrants who arrived to New York in the early 20th century. A grand plan for the church’s reconstruction was envisioned following the destruction of the World Trade Centre. Archdiocesan officials say that the goal is for the church to be completed in time for the 20th anniversary of the terrorist attacks on 11 September, 2021.