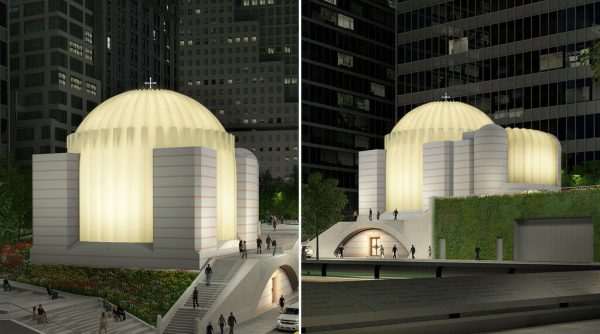 Today, on September 11, His Eminence Archbishop Elpidophoros of America will be joined by family members of Orthodox Christians who perished on 9/11 for a Memorial Service in front of the Saint Nicholas National Shrine at 12:00 noon.

As it was reported before, the reconstruction work of St Nicholas Greek Orthodox Church and National Shrine in lower Manhattan resumed at the beginning of August. The church, destroyed during the collapsing Twin Towers on 9/11, had been stalled due to financial problems as an on-again, off-again construction project for nearly 20 years. Finally, underway again, the construction works are slated to be completed in time for the 20th anniversary of the 9/11 Twin Tower bombings.

Blessing the beginning of the reconstruction works in August, His Eminence Archbishop Elpidophoros of America said, “Nearly twenty years ago, our Saint Nicholas fell with thousands of our fellow human beings lost in the ashes of 9/11, and countless others wounded in body, heart, and soul by a savage act of hatred and terror. We cannot, we must not, and we shall not let this stand. We are going to open the Saint Nicholas Church and National Shrine as a sign of love, not hate; a sign of reconciliation, not of prejudice; and a sign of the ideals that exist in this great American Nation, where one’s religious liberty and freedom of conscience never excludes, but only embraces.”