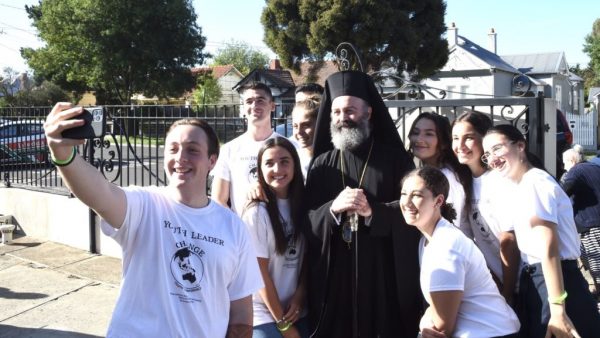 It was the end of a particularly balmy summer’s day, yet the 250 or so delegates of the Melbourne Conference showed no signs of tiredness or boredom, Neos Kosmos reports.

Throughout the day’s proceedings, and particularly during Archbishop Makarios’ addresses, they remained with their gaze transfixed upon the Archbishop’s countenance as he emphasised to them the importance of spiritual, intellectual and physical growth. Stressing individual responsibility and initiative, he highlighted the significance of choice, explaining however, that choices have consequences.

Quoting Heraclitus, Archbishop Makarios opined that while everything changes, certain truths remain constant for all time. These, he posited to youthful delegates who are navigating their place in a fragmented, changing, cacophonous and of late, quite brutal world, culminate in the practice and understanding of Perfect Love, which the Orthodox Church teaches, is personified in Christ.

In his keynote address: ‘The Cross Stands While the World Turns,’ Archbishop Makarios provided a brief synopsis of the trends that seek to destabilise humanity’s understanding of itself, such as war, environmental degradation, abuse of the body and social degradation, outlining how the salvific message of the Church can act as a stabilising force.

Implied in his message to the youth, is that while there exist a multiplicity of paths open to them, for which they deserve support, nurturing and guidance as these are traversed, ultimately, their preferences are their own. The Archbishop’s injunction, was to encourage delegates to look beyond the superficial and to ponder, and where necessary, change their world perspective.

During the speech on climate change by former President of the Victorian Association of Science Teachers, Artemisia Bennett, from the parish of Saint Dimitrios Moonee Ponds, Archbishop Makarios was heard to exclaim: ᾽Καλά τους είπε,᾽ as a recording of one of climate activist Greta Thunberg’s speeches was played, in which she castigated world leaders for their greed and inactivity.

Later, seated for lunch, not removed from, but rather, in the midst of all the delegates, both Archbishop Makarios and visiting Metropolitan of Chicago Nathaniel, repeated their admiration for the doughty Thunberg.

The rise of social media and its prevalence within society poses one of the great social challenges of the modern era.

Expert Chris Vlahonasios provided, in his talk ‘iOrthodox: Navigating Social Media’, a nuanced and sophisticated analysis of the dangers involved in incautious use of online social applications, ranging from abuse, grooming, and bullying, outlining legal, social and pastoral means of seeking assistance, support and protection, where needed, while also offering a comprehensive code of conduct for ethical and enriching use of the internet.