Archbishop Mark of Berlin and Germany, Student of St Justin Popovic, Participates in the Translation of His Relics

Source: ROCOR
Natalya Mihailova | 19 June 2014
Thousands of believers in Serbia and other republics of the former Yugoslavia, as well as Greece, Russia, Germany, Switzerland, the USA and Australia, and other countries, gathered on Saturday, June 14, 2014, at the Celije Monastery, located a hundred kilometers from Belgrade, to venerate the relics of St Justin (Popovic, 1894-1979). He was a great monastic ascetic and eminent theologian, canonized by the Serbian Orthodox Churh in 2010. 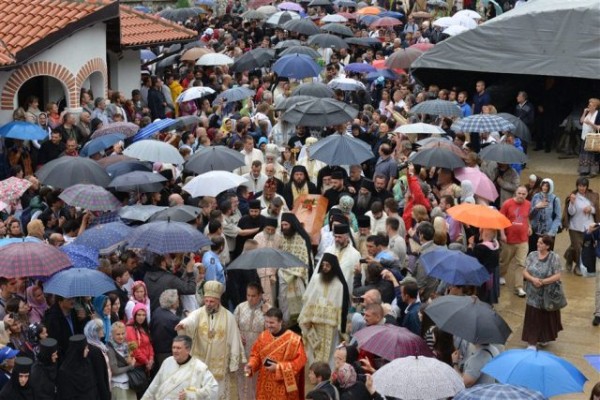 On Thursday, June 12, the relics of the saint were uncovered. Solemn Divine Liturgy to mark the event was celebrated on June 14, the feast day of the saint, as reported by the official website of the Serbian Orthodox Church. 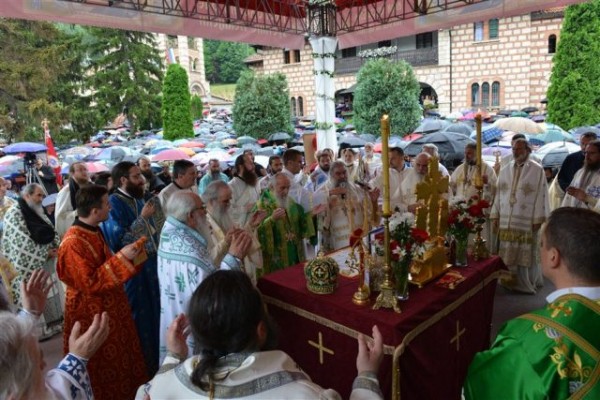 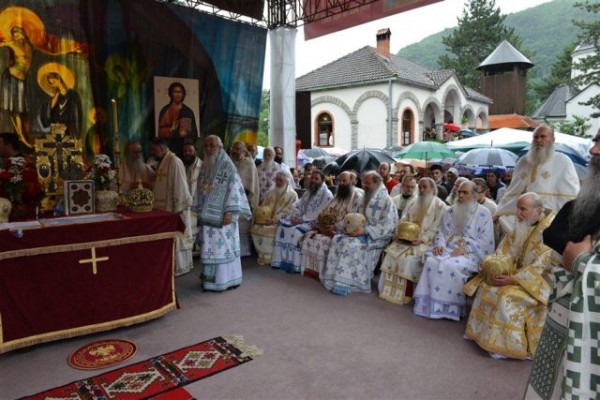 A great number of priests from many countries of the Orthodox world and monks of Holy Mt Athos (including the abbot of the Serbian Hilandar Monastery, Fr Mefodij) participated in Liturgy, at which the singing was performed antiphonally.

Attending the services were also the Minister of Religious Affairs of Serbia, Milet Radojevic, representatives of the Serbian military and eminent social figures. 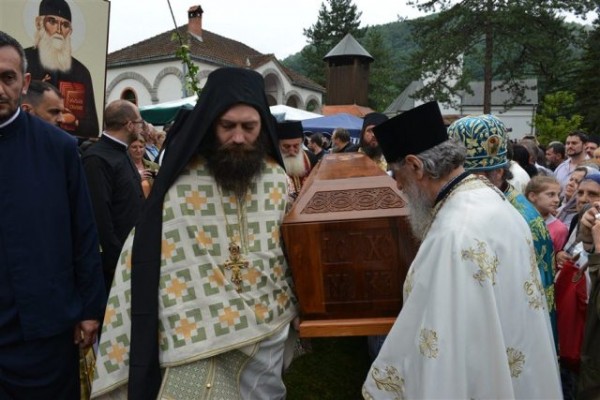 After the service, the relics of St Justin were brought from the monastery courtyard, where Liturgy was celebrated, to the Church of St Savva of Serbia, built according to the instructions in St Justin’s last will and testament, funded by the sale of his books. Until the fresco work is completed, the relics will temporarily be housed in the old monastery church of Holy Archangel Michael. 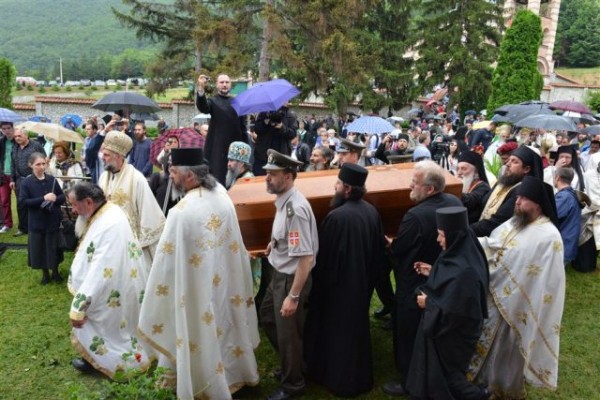 The believers then venerated St Justin’s relics over the course of several hours.

St Justin was born to the family of a priest on April 6, 1894, in the city of Vranje in southern Serbia. In honor of his birth on the eve of the Annunciation of the Most-Holy Mother of God, he was given the name Blagoj [“blessed’] upon his baptism. From 1905-1914 he studied in St Savva of Serbia Seminary in Belgrade. On January 1, 1916, he was tonsured a monk and given the name Justin in honor of Holy Martyr Justin the Theologian. He was then sent to St Petersburg to study in the Theological Academy. In June of 1916, he left for England, where he enrolled in Oxford University, where he studied until 1919. He then moved to Athens, Greece, where he worked on his doctoral dissertation at Athens University on the topic “Problems of Individuality and Knowledge According to St Macarius of Egypt” (he defended his work in 1926). From 1921 on he taught Holy Scripture of the New Testament, dogmatic theology and patristics at Sremskije Karlovci Seminary in the Kingdom of Yugoslavia. 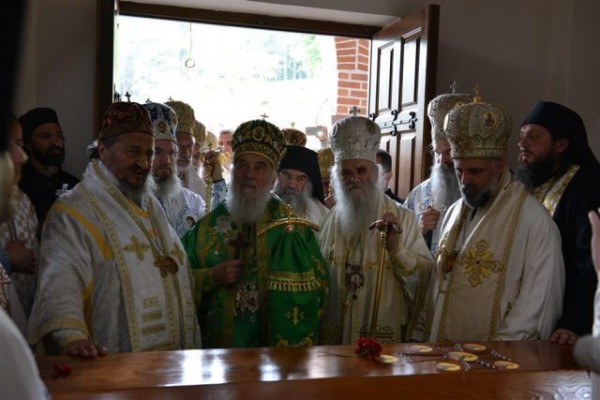 In 1922, he was ordained a hieromonk. In 1930, he was appointed aide to Bishop Josif of Bitola and did missionary work among the Uniates in the Carpathian Mountains (Uzhgorod, Khust and Mukachevo), which was then part of Czechoslovakia but under the jurisdiction of the Serbian Orthodox Church. He was a candidate for the episcopacy in the reestablished Diocese of Mukachevo, but declined consecration. From 1932, he was a professor at Bitola Theological Seminary, teaching dogmatic theology. In 1934, he became a docent of dogmatic theology at Belgrade University. He was one of the founders of the Serbian Theological Society created in 1938.

In May, 1948, he became the spiritual father of Celije Convent near Valevo, where he lived the rest of his days.

He died on the feast day of the Annunciation in 1979, and buried at Celije Monastery. 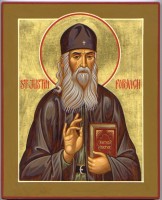 Through the Pages of the Theological…
Hieromonk Nektary (Radovanović)

Today the Serbian Orthodox Church celebrates the memory of St. Justin of Ćelije, who was glorified… 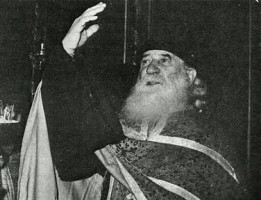 When a man belonging to Christ dies, he simply sets aside his body like clothing, in…