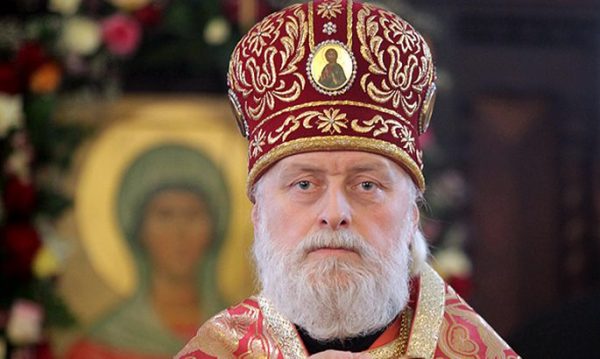 On 29 May 2018, the Synod of the Estonian Orthodox Church of the Moscow Patriarchate held an extraordinary session at the Cathedral of St. Alexander Nevsky in Tallinn with the view of electing the Primate of the Estonian Church.

Archbishop Yevgeny (Valery Germanovich Reshetnikov) was born in Kazakhstan in 1957 and spent some of his childhood and youth years in the city of Kirov. He did his military service in 1977-79.

Upon demobilization he worked at the diocesan administration of Vyatka, at the same time serving as subdeacon of Bishop Khrisanf (Chepil) of Vyatka and Slobodskoy.

He took monastic vows with the name Yevgeny on 27 July 1986, was ordained hierodeacon on August 3, and hieromonk on August 28. In March 1988 he was elevated to the rank of hegumen.

On 1 January 1989 he was elevated to the rank of archimandrite and appointed vice-rector for administrative work of the Moscow theological schools. From 16 November 1990 onwards he served as inspector at the Moscow Theological Seminary.

On 6 August 1991 he was appointed rector of the Stavropol Theological Seminary. On 28 February 1994 he became acting chairman of the Education Committee of the Holy Synod of the Russian Orthodox Church.

On 16 April 1994 he was consecrated as Bishop of Vereya, vicar of the Moscow diocese.

On 18 July 1995 he was appointed rector of the Moscow theological schools, having retained his position as acting chairman of the Education Committee.

By the decision of the Holy Synod of 18 July 1998, he was appointed chairman of the Education Committee.

On 25 February 2000 he was elevated to the rank of archbishop.

Since 22 March 2011 he has been a member of the Supreme Church Council of the Russian Orthodox Church.

Archbishop Yevgeny is a member of the Synodal Biblical and Theological Commission, the Synodal Canonization Commission (since 2015), and the Coordinating Centre for Promoting Theological Science in the Russian Orthodox Church.