Patriarch Kirill: We do not call the forthcoming Pan-Orthodox Council ecumenical 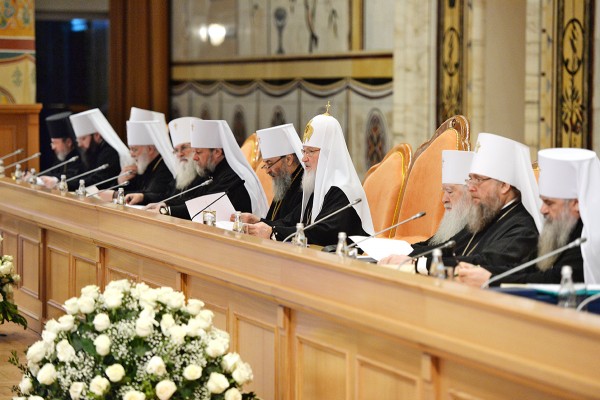 ‘We believe that the Church of Christ is One, Holy Catholic and Apostolic, as the Creed clearly states. The Church is one by her nature. The existence of many autocephalous Churches in the world is a form of the Church’s existence in history most suitable for carrying out her salvific mission. We also know that the Church’s decision-making important for the Orthodox Plenitude has always required the participation if not of all the Orthodox hierarchs then at all events representatives of each Local Church. In this sense, Ecumenical Councils and some other Councils of pan-Orthodox significance are a visible expression of the Unity of the Church, her conciliar nature, a reflection of her self-awareness as one body in Christ (sf. Rom. 12:5).

‘The reception by the whole Church of a particular Council has always been gradual and, ‘as church history shows, no Council could impose its decisions on the Church if they proved to be rejected by the people of God, if there was no all-church reception of a Council’s resolutions’. For this reason, no Ecumenical Council became such only by the fact of its convocation: its real significance became clear only after some, sometimes very long time.

‘We do not call Ecumenical the forthcoming Holy and Great Council of the Orthodox Church. Unlike ancient Ecumenical Councils, it is not called to make decisions on doctrinal issues because such were made long ago and are not subject to revision. It is not called either to introduce any innovation in the liturgical life of the Church and her canonical order. Nevertheless, it may, if prepared correctly, become an important factor in consolidating the inter-church unity and cooperation and contribute to the clarification of the responses that the Orthodox Church gives to challenges of today on the basis of her age-old Tradition’.

His Holiness also stressed that this Council will be pan-Orthodox only if representatives of all the generally recognized autocephalous Orthodox Churches take part in it.

Addressing history, he stated that, throughout almost all the last one thousand years, the fellowship of Local Churches in council was complicated. Among the reasons for it was the fact that during many centuries all the ancient Patriarchates were under the Muslin rule. The circumstances of the 20th century did not favour the activization of inter-church communication either: suffice it to recall the Balkan wars, World War I, the 1917 Revolution in Russia, which initiated the severe persecution of the Church, the disintegration of the Ottoman Empire and deportation of Christians from Asia Minor, and finally, World War II.

Nevertheless, already in 1923, in Istanbul, the Church of Constantinople convoked the so-called Inter-Orthodox Congress and in 1930 an Inter-Orthodox Preparatory Commission which met in the Monastery of Vatopedi on Mount Athos. ‘These first attempts at pan-Orthodox interaction failed’ His Holiness said, ‘Some Local Churches did not attend these events. For the Russian Orthodox Church it was impossible in the then situation. The work of the Inter-Orthodox Congress in Istanbul was carried out in a reformist spirit of disregard for the Tradition. For this reason, nobody recognized its decisions later, except for the decision on the new calendar adopted by some Churches at the cost of consequent deplorable schisms’.

Patriarch Kirill also reminded the council that pan-Orthodox initiatives were made in the 20th century not only by the Church of Constantinople. Thus, at the initiative of the Moscow Patriarchate, a Conference of the Heads and Representatives of Local Orthodox Churches took place in 1948 in Moscow. It was timed to the celebration of the 500th anniversary of the autocephaly of the Russian Orthodox Church. However, its decisions were not accepted by the Local Churches which deemed that it was only the Patriarch of Constantinople who could convoke any conference of pan-Orthodox significance.

The preparations for a Holy and Great Council of the Orthodox Church really intensified in 1961 at the 1stPan-Orthodox Conference which took place on Rhodes Island in Greece, His Holiness noted. It drafted a comprehensive list of over one hundred topics to be prepared and submitted for consideration to a future Council. A little later, in 1968, the 4th Pan-Orthodox Conference in Geneva adopted the decision that further preparation of a Council should be made as part of Pan-Orthodox Pre-Council Conferences and Inter-Orthodox Preparatory Commissions preceding its convocation. This format of the preparation is valid today.

At the 1962 Rhodes Conference, all the Local Churches were asked to state their point of view on the adopted topics. Speaking about the participation of the Russian Orthodox Church in the elaboration of these topics, Patriarch Kirill pointed out that it took it with all responsibility. In 1963, the Holy Synod established a special commission to be chaired by the late Metropolitan Nikodim of Leningrad. It included leading theologians of the Russian Orthodox Church – hierarchs, clergy and laity. For the five years of its existence the commission carried out an enormous work to prepare draft documents on all the topics of the list without exception. ‘It would not be an exaggeration to say that the Russian Church made an unprecedented contribution to the preparation of a Pan-Orthodox Council and was not simply ready for it but proposed concrete well-considered Council’s draft documents, which was a resulted of the work carried out by the best theologians of our Church’, His Holiness stressed.

‘In the 1990s, this work was suspended for a long time’ His Holiness said, ‘the reason was that in 1996 the Patriarchate of Constantinople established the so-called Autonomous Estonian Orthodox Church in the canonical territory of the Moscow Patriarchate and intended to make it a full-fledged participant of the pre-council process, with which our Church categorically disagreed’. Prospects for resuming the preparations for a Pan-Orthodox Council appeared as late as 2008, when the Meeting of Primates of Local Orthodox Churches made a decision that it was only representatives of autocephalous Churches, not autonomous as its structure in Estonia is referred to by the Patriarchate of Constantinople, who can henceforth participate in the events in preparation for the Council. ‘Since that time, representatives of autonomous Churches have participated in the pre-council process not independently but as members of their kyriarchal Churches’ Patriarch Kirill explained.

Patriarch Kirill also said that the preparation process was continued in preparatory commissions and at the 4th Pan-Orthodox Pre-Council Conference in 2009. ‘In March 2014, I took part in the Meeting of the Primates of Local Orthodox Churches which took place in Istanbul. It made the decision to convene a Pan-Orthodox Council in 2016, ‘if unforeseen circumstances do not prevent it’, His Holiness noted.

It was assumed that in the remaining limited time, the efforts of all the participants in the pre-council process will be intensified. To this end, the Meeting of the Primates set up an inter-Orthodox commission which managed to review three draft documents of the Council and reach agreement on them at the 5thPan-Orthodox Pre-Council Conference which took place last October. These are texts on the importance of fasting, relationships of the Orthodox Church with the rest of the Christendom and on the way of declaring church autonomy.

As part of the pre-council process, the topic of autocephaly and the way of declaring it was also discussed.

The Synaxis of the Primates of Local Orthodox Churches, which took place on January 21-28, 2016, in Chambesy, considered in particular the draft documents of the Pan-Orthodox Council on Mission of the Orthodox Church in the Modern World, the Sacrament of Marriage and Its Impediments, as well as other themes.

Information Service of the Bishops’ Council

Fire Destroys an Orthodox Church in…

The rescuers believe it was an arson.

Most viewed articles
How to Survive in Modern City. 8 Essential Conditions216
What a Caveman Said: To Perceive That Which Is Eternal107
The Reason Christ Revealed Himself82
Appeal for Help from the Church of the Mother of God in Austria82
Vandals Attack Serbian Church in Croatia77
Fire Destroys an Orthodox Church in Estonia76
The Church’s Birthday – on the Feast of Holy Pentecost58
How Often Do We Come to Church and Worship God?1
Most popular authors
Fr. Andrei Gavrilenko216
Pravmir.com team153
Archpriest Stephen Freeman107
Archpriest Geoffrey Korz82
Archpriest Georgy Kharlov82
Metropolitan Hilarion (Alfeyev)57
Maria Trushanina1
Priest Luke A. Veronis1