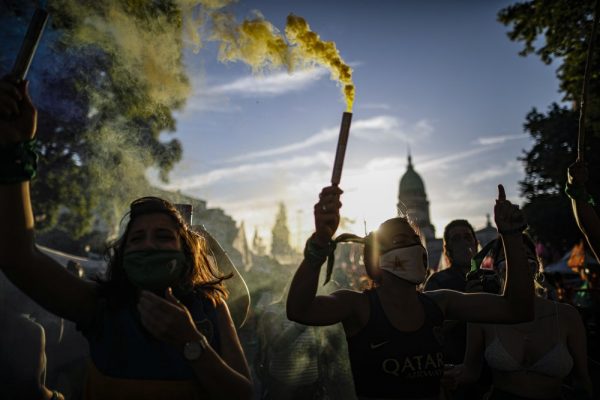 Lawmakers in Argentina’s lower house on Friday passed a bill that would legalize abortion in most cases, a proposal from President Alberto Fernández in response to demands from women’s rights activists, reports AP News.

The bill, which needs approval from the country’s Senate in a debate expected before the end of the year, allows for voluntary abortions to be carried out up to the 14th week of pregnancy.

The proposed law was approved in a 131-117 vote with six abstentions after a debate that extended from Thursday into the early hours of Friday morning.

Demonstrators in favor of decriminalizing abortion, spent the night outside the congress building in Buenos Aires, waiting for the vote’s results. Many of them wore face masks in the green color that has become a symbol for their movement.

Hundreds of meters (yards) away, not far from the parliament building, hundreds of opponents dressed in light blue and carrying the national flag deplored the result, with some shedding tears.

While the bill passed the lower house, the outlook is less clear in the country’s Senate. Two years ago, during the administration of more conservative President Mauricio Macri, the upper house voted against a similar bill to legalize abortion after it was narrowly approved by the lower house.

Before getting elected one year ago, Fernández had promised to push for making abortion voluntary and cost-free.