Source: Eastern Christian Insights
Homily for the Sunday after the Ascension and commemoration of the Holy Fathers of the First Ecumenical Council of Nicaea in the Orthodox Church.
Priest Philip LeMasters | 31 May 2020 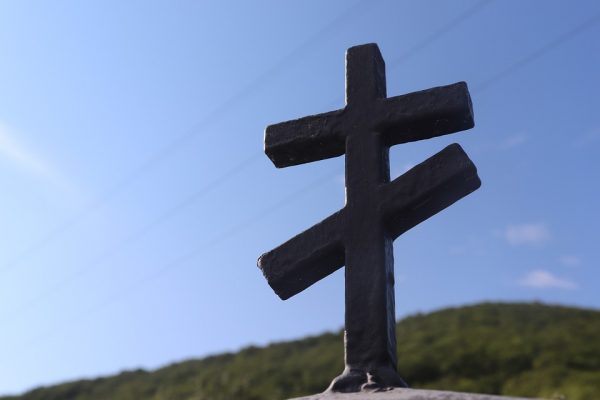 Forty days after His glorious resurrection, our Lord, God, and Savior Jesus Christ ascended in glory into heaven and sat at the right hand of God the Father.  He did so as One Who is fully divine and fully human, One Person with two natures. He ascended with His glorified, resurrected body which still bore the wounds of His crucifixion.  The Ascension shows that through Him our humanity has come to participate by grace in the eternal life of the Holy Trinity.  He has made us “partakers of the divine nature” who may share in His fulfillment of what it means to be a human person in God’s image and likeness.

Today we commemorate the Holy Fathers of the First Ecumenical Council in Nicaea.  They rejected the teaching of Arius that Jesus Christ was not truly divine, but a kind of lesser god created by the Father at a certain point.  The Council declared, as we confess to this day in the Nicene Creed, that our Savior is “the Son of God, the only-begotten, begotten of the Father before all worlds. Light of Light, very God of very God, begotten, not made, of one essence with the Father, by Whom all things were made.”  The Fathers of Nicaea saw clearly that the One Who brought us into the eternal life of God must Himself be eternal and divine.  Only God could make human persons “partakers of the divine nature” by grace.

Had Christ been merely a creature or an especially impressive religious teacher or example, He would have remained captive to the corruptions of the world as we know it.  He could have taught and inspired people, but would not have been able to conquer death or make a path for us to find the fulfillment of our humanity in the Holy Trinity.  Those who water down the faith to the point of viewing the Savior as simply an excellent human being make it impossible to acknowledge Christ as the One Who has truly united humanity and divinity in Himself.  We can learn a lot from great teachers and examples, but only the Son of God can make us participants in life eternal.  Only He could say to the Father, “glorify Me in Your own presence with the glory which I had with You before the world was made.”

The divine glory displayed in Christ’s ascension is entirely different from the power and fame that people find so appealing in our world of corruption.  At some level, we all know how weak and insignificant we are in the larger scheme of things.  That is why we so easily make false gods of just about anything that can distract us from recognizing the truth about ourselves, including the inevitability of death.  Putting our ultimate trust in nations, rulers, and riches—or our health, appearance, talents, and relationships–or any created thing leads inevitably to idolatry, for it is a form of worshiping a false god, regardless of whether we call it a religion. Doing so will also lead us to demonize our enemies, real and imagined, because it often makes us feel better about ourselves by comparison when we have someone else to condemn.  That is surely one of the reasons that so many people in our culture have become slaves to anger and hatred toward those they view as their rivals or opponents in a zero-sum game for getting all the glory by being on the right side.

The glory of our ascended Lord is the complete opposite of such pathetic and perverse efforts to build ourselves up at the expense of others. Remember that He ascended only after descending, only after dying on the Cross, being buried in a tomb, and descending into Hades.  He rose from the dead because He had humbled Himself to the point of accepting rejection, torture, and crucifixion as a blasphemer and a traitor.  He was mocked as a failure and made a public example of what happened to people who dared to challenge the authority of Rome, even though His Kingdom is clearly not of this world.  He completely repudiated earthly glory in order to make a way for us into the brilliant joy of heaven.

Christ endured all this, not simply as a religious teacher or virtuous person, but truly as the eternal Son of God Who spoke the universe into existence. Let that sink in for a moment, for the unfathomable humility of the Savior destroys our usual assumptions about what it means to be high and mighty. The divine glory revealed so powerfully at His ascension shines brilliantly in contrast to what passes for honor in a world that typically chooses to remain in the dark night of the tomb.  If we dare to identify ourselves with Him, we must open the eyes of our souls to the light of His heavenly glory and refuse to wander in spiritual blindness.  In order to celebrate the Ascension with integrity, we must ascend with Him into the eternal life of the Holy Trinity even as we live and breathe with our bodies in a world that remains very far from the fullness of His Kingdom.

By rising into heavenly glory as the God-Man, He has shared His gracious divine energies with us.  He shows us what it means to be truly human in the divine image and likeness.   In order to unite ourselves to Him, we must reorient our desires for fulfillment, meaning, and joy to the One Who overcame the worst the darkened world could do in order make us participants in the eternal day of His heavenly reign.  The contrast between the heights of heaven and the mundane realities of our lives is obviously very great. The point of division is not, however, that we are ordinary people with common problems who belong to a very small parish.  It is, instead, that we have not united ourselves to Christ in holiness to the point that every dimension of our life in this world has become a brilliant icon of His salvation.

Of course, that is a very high goal which no one may claim to have fulfilled.  God is infinitely holy and the journey to become perfect as our Father in heaven is perfect is truly eternal. No matter where we are on that path, we must all ask our ourselves quite seriously whether we are ascending with Him into greater holiness as we go through our daily lives, face whatever set of challenges we have, and respond to the constant barrage of temptations to put our trust elsewhere.  It may be easy to attend services, sing in praise of the Ascension, and call ourselves Christians, but it is much more demanding to conform ourselves to Christ such that His radiant glory shines through us.

We should not dream of performing grand gestures of holiness, for that would likely lead us into prideful fantasies.  Instead, we do well to focus on taking the small steps that we are capable of right now in relation to the people around us and the circumstances with which we are familiar.   That means humbling ourselves to put the needs of others before our own preferences in our families, friendships, and workplaces, as well as in our parish.

Christ prayed to the Father that His followers “may be one, even as We are one.”  We will never ascend in holiness if we think that we relate to God as isolated individuals with a religion that concerns only what we do when we are alone.  The Church is one and we are members of Christ’s Body together.  He ascended with His body and we will too by serving Him in the Church as we do what needs to be done for the flourishing of our small parish.  We ascend into the heavenly Kingdom whenever we “lay aside all earthly cares” in the celebration of the Divine Liturgy.  Nourished by His Body and Blood in the Eucharist, let us join ourselves to the great Self-offering of the Savior in our common life, for it is only in Him—our risen and ascended Lord—that we may enter into the heavenly glory for which He created us in His image and likeness.  He has already ascended.  Let us go up with Him together.