Not Exactly as Advertised 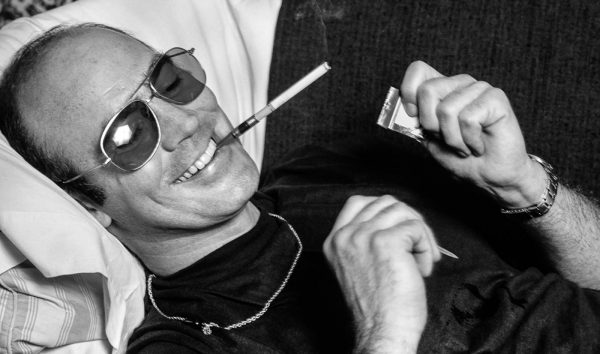 It is, I suppose, because I’m the type that doesn’t get out much that I had never heard of Hunter S. Thompson before now. As the better-informed may recall, Thompson was the father of so-called “Gonzo Journalism”. His break-through book in 1967 was Hell’s Angels, which he wrote after spending a year with that motorcycle club. He is best known (Google informs me) for his 1971 book Fear and Loathing in Las Vegas. He became famous for his  irreverent, hard-living, and exuberant lifestyle.

Google also reports that, “He was also known for his lifelong use of alcohol and illegal narcotics, his love of firearms, and his iconoclastic contempt for authoritarianism. He often remarked: ‘I hate to advocate drugs, alcohol, violence, or insanity to anyone, but they’ve always worked for me.’” His number one famous quote, summing up his personal philosophy, said, “Life should not be a journey to the grave with the intention of arriving safely in a pretty and well-preserved body, but rather to skid in broadside in a cloud of smoke, thoroughly used up, totally worn out, and loudly proclaiming, ‘Wow! What a ride!’” For many (even for those who like myself had never heard of him), this would seem to represent the path of wisdom. We despise tradition, reject authority (deriding all respect for it as “authoritarianism”), and strike out on our own, creating our own reality and living by our own rules. We even create cheesy acronyms for such personal iconoclasm: YOLO. You Only Live Once. Wow, what a ride.

This philosophy, lived in varying degrees by so many in our secular West, promises fulfillment. If we despise tradition and show contempt for authority, making and living by no one’s rules but our own, we will end our lives happily, thoroughly used up, totally worn out, and loudly proclaiming how wonderful was the path we had chosen. This is the promise of secularism: fulfillment, happiness, joy. Choosing to live by the wisdom of others (even the wisdom of Christ) is a waste. It is far too tame; we would only end up arriving at the end of our lives in a pretty and well-preserved body, having blown our one chance for joy.

As they sometimes say, this secular product with its promise of joy is “not exactly as advertised”. This is clear enough from Thompson’s own life. With all his predilection for “drugs, alcohol, violence, and insanity”, he did not in fact skid to this final end in a cloud of smoke loudly proclaiming, “Wow! What a ride!” In fact, at 5.42 p.m. on February 20, 2005, he took a revolver, phoned his wife, put the phone down, put the revolver to his temple, and blew his brains out. His son, daughter-in-law, and grandson were in the next room.

He had been depressed, apparently, for some time. A suicide note to his wife was later found. It read: “No More Games. No More Bombs. No More Walking. No More Fun. No More Swimming. 67. That is 17 years past 50. 17 more than I needed or wanted. Boring. I am always bitchy. No Fun — for anybody. 67. You are getting Greedy. Act your age. Relax — This won’t hurt.” It turns out that living out his philosophy did not bring joy. For the last 17 years of his life, by his own account, he was bored and bitchy, and there was “No Fun—for anybody”.

The point of this sad story is not about the choices of Hunter S. Thompson. He was only one child of many who bought the age-old promise that if we go our own way and live by our own rules we can become as gods. Secularism promises fulfillment and joy and a great and thrilling lifelong ride to those who reject traditional wisdom and live iconoclastically. But the promise is a lie and the product not exactly as advertised. That is what the Bible means when it calls sin “deceitful”.

But this much is true: you do only live once. All the more reason to choose wisely how we will live. Hunter S. Thompson chose poorly. Let all those who might be tempted by his exuberant and witty rhetoric consider his end, and choose well.

St. Ignatius of Antioch, martyred in Rome in about the year 107, wrote that along with the death…

Several times a week I drive past a certain church, and recently I was moved by curiosity to…

Recently I read an interesting critique of American Christianity. It pointed out that in an earlier day the…

Most viewed articles
On Feeling Forsaken170
Patriarch Kirill: We In No Way Question the Healing Power of the Holy Mysteries of Christ!138
Ethiopian Patriarch Thanks Patriarch Kirill For the Support During the Persecution107
Maronite Patriarch Thanks Russian Patriarch for His Support for Christians in the Middle East99
Food for the Journey67
The pandemic is a significant examination for us all, Transylvania Metropolitan says46
Fire Destroys Main Building with the Church of St. Peter Convent in Pavlodar46
Athens and Jerusalem: the Role of Philosophy in Faith, with Analysis by St. Gregory Palamas24
Sunday of the Samaritan Woman1
We Are Not Saint Mary of Egypt (But We Can Still Repent)1
Most popular authors
Pravmir.com team390
Archpriest John Moses (+2019)170
Dcn. Michael Schlaack67
Aurelian Iftimiu46
Eric Hyde24
Archpriest Geoffrey Korz1