Saint Vladimir’s Seminary here was the site of a meeting of web team members representing member jurisdictions of the Assembly of Canonical Orthodox Bishops in North and Central America on Wednesday, March 6, 2013. 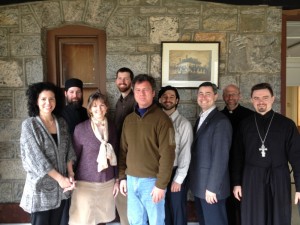 “Discussion wasn’t limited to the Assembly web site, but to the entire interaction between the Assembly and the jurisdictions regarding the web—what we can offer one another, what the Assembly can offer us, how we can best interact and work together, how the effort can be organized, and so on,” said attendee Ryan Platte, Technical Manager of the Orthodox Church in America’s web site oca.org.  “A variety of issues were covered, including the creation of a common clergy roster and other directories.

“Everyone present had a unique perspective and skillset and contributed their expertise to common efforts,” Ryan continued.  “I was privileged to take part in this meeting of such talented and energetic people as we discovered valuable ways to work together in the immediate future.”