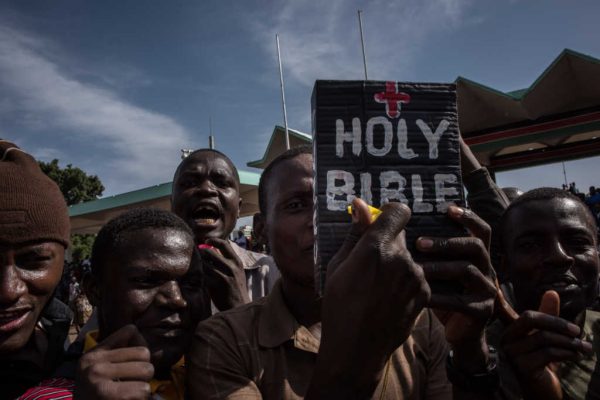 A group of Christians have been killed in Kenya after refusing to recite the Islamic creed.

According to the persecution watchdog International Christian Concern, the group was separated from their Muslim friends before being instructed to pay homage to the Prophet Muhammad by reciting the “Shahada.” When they refused, they were summarily executed.

“A passenger bus belonging to Medina Bus Company, traveling between Wajir and Mandera was attacked by a criminal gang at around 1730 hours this evening, ” a local Kenyan police officer confirmed to ICC. “The attack happened at Maadathe area, five kilometers to Kotulo. Lives are believed to have been lost.”

The group was accosted while traveling on a bus towards the North-Eastern city of Mandera. Everyone present was then told they must recite the Shahada. Those who couldn’t were marched off the bus and shot at point-blank range. It is thought that the attack was perpetrated by al-Shabaab militants.

Two further passengers currently missing are presumed to be dead.

This is not the first time such an incident has occurred.

Just last year, two men were shot dead after refusing to recite the Islamic creed. Prior to that, in 2014, some 28 teachers traveling to Nairobi for the Christmas holiday were gunned down after being forced to try and recite the Shahada.

There have been stories of hope, however. Indeed, on several occasions, Jesus-followers have had their lives saved through the incredible bravery of Muslims.