Source: AsiaNews.it
Natalya Mihailova | 31 August 2015
For the first time tomorrow, Orthodox and Catholics will celebrate event together, which Pope Francis picked this year. The content of the patriarch’s message is very similar to that of the encyclical Laudato si’. Man is a fool to think that he owns creation rather than being its steward. Ascetic behaviour can correct the excesses of consumerism. The Gospel can clean the spiritual garbage caused by material garbage. 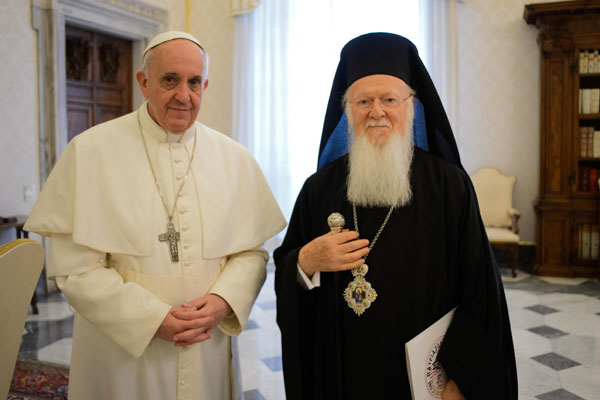 Istanbul (AsiaNews) – In his message for this year’s World Day of Prayer for the Care of Creation, which falls tomorrow, Bartholomew I, Ecumenical Patriarch of Constantinople, again sounded the alarm over climate-related tragedies that affect humans and nature. He did so by focusing on the need for asceticism and sobriety in the ways we use energy and the earth’s resources. After he turned the world in a garbage dump, man’s heart can be healed only through the Gospel.

On the issue of ecology and care for creation, the Orthodox Church has been several steps ahead of the Catholic Church. A few weeks ago, Pope Francis picked 1 September to celebrate the need to care for creation, calling on Catholics to mark the event. Thus, he will celebrate the event for the first time tomorrow. In so doing, the paths of the two Churches appear to be converging.

In his encyclical Laudato si’ on protecting creation, the pontiff cited Patriarch Bartholomew several times. In his message, the head of the Ecumenical Patriarchate also quotes directly from the encyclical.

At the outset, Bartholomew shows that man is responsible for the climate changes that threaten the humanity’s existence and nature’s balance, which undermine God’s “very good” creation.

In Laudato si’, Pope Francis cites man’s “distorted anthropocentrism”. In his megalomania, man thinks he owns the earth rather than act as the steward of a world created by somebody else.

Bartholomew bitterly noted that, “like the Rich fool in the Gospel, humans are the destroyers of creation with their greed, attachment to the land, and earthly goods, striving constantly to increase them.”

Inspired by the Christian tradition, the patriarch calls for a return to the traditional practice of “asceticism,” something that Francis might refer to as sobriety.

“Against the principle of consumerism, we oppose the principle of asceticism,” the patriarch said in his message. “This principle requires limiting what we need to what is indispensable. This does not entail self-denial but rather rational consumption and the ethical condemnation of waste.”

Finally, for Bartholomew, the earth’s garbage is both “material” and “spiritual”. Hence, the “protection of creation” needs the Christian message,” and an “evangelic and apostolic commitment to renew . . . the Good News in a stunned world”. In a tired mankind, “this can revive its worn out spiritual nature.”

This must be done “in a flexible and multi-faceted way” to “pass on a message of hope and peace, that is the real joy of peace, and the joy in Christ.”